Ramadan in the Muslim World through the Ages 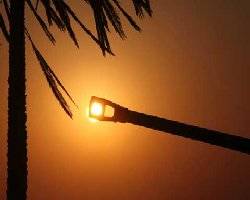 In the past, there was a custom in Muslim countries to increase the lighting of mosques upon sighting the crescent of Ramadan.

Ahmad ibn Yoosuf, the famous Abbasid writer, said,
“The Caliph, Al-Ma’moon, ordered me to write to all the territorial governors to urge people to have more lamps during the month of Ramadan and make them acquainted with the virtues of this. Therefore, I did not know what I should write or say, as no one preceded me so that I can follow his way or approach. I then took an afternoon nap and dreamt that someone came to me and said, ‘This makes the passers-by feel safe, it is a light for the observers of the night voluntary prayer, it eliminates the places of suspicion and keeps the Houses of Allah well-lit, not darkened.’ I woke up while inspired with what I should write. I began with these and then added from my own.”
The Caliphs and governors of the Muslim states were not too arrogant to accompany judges and ascend high places in order to sight the crescent of Ramadan. Al-Asma‘i

said, “I ascended a high room along with Ar-Rasheed (the Caliph) to sight the crescent of Ramadan. I then said, ‘O Commander of the Believers! What is meant by the poetic verse said by Hind bint ‘Utbah: 'We are the daughters of Taariq. We walk upon the plush floorings.’ Ar-Rasheed said, ‘At-Taariq is the planet in the sky.’ Al-Asma‘i then said, ‘You are correct, O Commander of the Believers.’" Then, Ar-Rasheed ordered 10,000 Dirhams to be given to him.
The righteous poets used to welcome the crescent of Ramadan by using their creative talents in describing it and considering it a sign of goodness, optimism and a good omen.
Anecdotes from the pages of history
It was narrated that a group of people, including the noble Companion, Anas ibn Maalik, may Allah be pleased with him, came to sight the crescent. Anas, may Allah be pleased with him, was about to complete a hundred years of age at that time. "I can see the crescent!" shouted Anas, may Allah be pleased with him, "It is there." He was pointing to it but they could not see it. Al-Qaadhi Iyaadh, who was a wise man of discernment, was also present there. He looked toward Anas, may Allah be pleased with him, and observed a white hair of his eyebrow hanging upon his eye. He raised it and then said to Anas, may Allah be pleased with him, "Look, O Abu Hamzah!" He kept looking on and saying, "I cannot see it (the crescent)."
One night people gathered to sight the crescent. They kept on staring at the horizon but saw nothing. Then a man among them shouted, "I can see it! I can see it!" The people expressed admiration for his sharp eyes and exclaimed, "How can you alone see it?" Delighted at the praise, he shouted, "There is another one behind it!" At this, the people laughed at him.
One night, people ascended a high place to sight the crescent but they could not see it. When they started to go back, a boy saw the crescent and directed them to its place. Then a man said to him, "Give your mother the glad tidings of great hunger."
In the city of Basrah, people went out one night to sight the crescent and then one of them saw it and he kept on pointing to it until the people saw it. When it was the time of the crescent of Shawwaal, the man who was known for his jocular disposition came to this man and said to him, "Get up to bring us out of what you have entered us in."
During the reign of Sultan Muhammed Al-Naasir ibn Qalaawoon, Ramadan came in winter and the sky was completely overcast and cloudy. Thus, sighting the crescent was not officially confirmed and people unanimously decided not to fast. However, it so happened that the wife of the Mufti, who had a sharp eyesight, managed to sight the crescent from the roof of her house. She informed her husband and he believed her. Her husband then went to the Sultan and told him about the matter. The Sultan asked her to swear upon her claim. Those who were present believed her and the sighting of the crescent was officially announced and people started fasting. Later, that woman was officially appointed as the person who would to sight the crescent. She woman was the first and the last one to get this honor and play the role of a human " telescope".