Sighting the Crescent of Ramadan - I 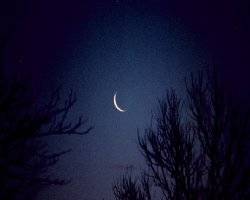 Unlike the crescents of other lunar months, the crescent of Ramadan is given special attention because it is the crescent of the best month in the sight of Allah The Almighty. This month is favored with several virtues; the most important is the revelation of the Quran on the best night of the month. Thus, scholars of Fiqh (Islamic jurisprudence) have occupied themselves with elaborating the rulings relevant to the sighting of the crescent, astronomers with making relevant calculations and means of observation and Muslim caliphs in celebrating the night of the sighting. Poets and writers vie with each other in praising the crescent and reflecting the feelings of joy in people's hearts.

The crescent of Ramadan in the eyes of scholars of Fiqh:
Scholars of Fiqh unanimously agree that the lunar month could be twenty-nine or thirty days. In a Hadeeth (narration), the Prophet

said: "We are an unlettered nation, we neither write nor know calculations. The month is like this and this (sometimes of 29 days and sometimes of 30 days)." [Al-Bukhari]
Al-Haafith Ibn Hajar

commented,
"The Arabs were described as unlettered because writing was rare among them. Allah The Almighty Says (what means): {It is He who has sent among the unlettered a Messenger from themselves.} [Quran 62: 2] This is not refuted by the fact that some of them had knowledge of writing and calculations, as such people were few and rare. Calculations in this context are pertaining to stars and planets. The Arabs knew little about this. So, the rulings relevant to the beginning of fasting and other acts of worship were made contingent on sighting the crescent in order not to place them under the hardships of making calculations. This ruling is effective even if there will come generations fully aware of calculations. Even the explicit meaning of words reveals exempting calculations in this regard at all. This is supported by the part of the Hadeeth that reads: "If you can not see it (the crescent), then complete thirty days (for the month of Sha‘baan)." The Prophet

did not say: then ask those who are knowledgeable of calculations. The rationale is that completing thirty days unites people and keeps them far from divergence and dispute." [Fat-h Al-Baari]
According to the majority of scholars, the beginning of Ramadan is determined by one of two ways, completing 30 days of Sha‘baan or sighting the crescent, even by just one trustworthy person. It was narrated that Ibn ‘Umar, may Allah be pleased with him, said, "People sighted the crescent, and when I told the Prophet

that I had sighted it, he fasted and ordered people to fast." [Abu Daawood]
Another group of scholars is of the opinion that sighting is not confirmed unless two trustworthy men give testimony, as is the case with the crescent of Shawwaal. As evidence, they quoted the Hadeeth of ‘Abdul-Rahmaan ibn Zayd, may Allah be pleased with him, that he gave a sermon on the 29th day of Sha‘baan and said, "I sat with the Companions of the Prophet

and they related to me that he said: 'Fast when you see it, and cease fasting when you see it and perform the rites of Hajj based upon that and if it is hidden by clouds then complete thirty days (of Sha‘baan). If two Muslim witnesses testify then fast and cease fasting." [Ahmad]
There is also the Hadeeth of the ruler of Makkah, Al-Haarith ibn Haatib, may Allah be pleased with him, as it was narrated that he said, "The Messenger of Allah

ordered us to perform the rites of Hajj upon sighting (the crescent); and if we could not see and two trustworthy witness testified, we should perform the rites accordingly." [Abu Daawood]
The majority of scholars, however, argued that the utmost that the mention of the two can signify is the rejection of the testimony of only one person. However, the aforementioned Hadeeth of ‘Abdullaah ibn ‘Umar, may Allah be pleased with him, indicates that the Prophet

indeed accepted the verbal testimony of Ibn ‘Umar, may Allah be pleased with him; and this is of a stronger indication.

Sighting the Crescent of Ramadan - II