The Real Meaning of Striving in Ramadan 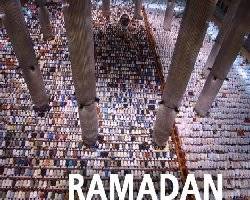 What does it mean to strive hard in Ramadan? Does our striving in Ramadan prevent us from giving in to desires? Do we returned in a worse state after Ramadan, or does it prevent us from desires? Is it a cause of a person's promotion in the sight of Allah The Almighty, due to the devotion of his heart, the purity of his soul, his approach to his Lord The Almighty, his standing straight on the way, and the forgiveness he will receive from Allah The Almighty?

Fasting should be the cause of the rectitude of the heart and soul and a means of approach to the Lord. It should enable a person to join those emancipated from Hell, and come out of Ramadan with forgiveness and mercy, otherwise, it will be thrown back at his face, as mentioned in the prayer, and it will say to him: "May Allah waste you just as you have wasted me!" [Abu Daawood]
The other kind of striving is with the Quran at night. It is the Quran which was revealed by Allah The Almighty as a source of mercy for the slaves, and light for their hearts, deeds, as a means of gaining closeness to Allah The Almighty, and a blessing, cure and guidance.
Consider the Hadeeth (narration) of the Messenger of Allah

: "Recite the Quran, because it will come as an intercessor for its reciter on the Day of Judgment." [Muslim] In relation to this a mention may be made of the authentic Hadeeth, which reads:
“The Messenger of Allah

saw in a vision a man lying flat on his back, and another man standing at his head carrying a stone or a piece of rock, and crushing the head of the lying man, with that stone. Whenever he struck him, the stone rolled away. The man went to pick it up and by the time he returned to him, the crushed head had returned to its normal state. The man came back and struck him again and so on until the Day of Judgment. The Prophet

said:
"The Quran will meet its companion on the Day of Judgment once he comes out of the grave as a pale man, and he will say, ‘Do you recognize me? I am your companion, the Quran, that made you thirsty during the scorching heat of the day, and sleepless at night (because of your long recitation of me). Every trader seeks to make profit from his trade, and now, you are getting the profit of your trade.’ He will be given the dominion in his right hand, and eternity in his left hand and the crown of gravity will be placed on his head. Then, it will be said to him, ‘Recite and ascend the stairs and chambers of Paradise.’ He will keep ascending as long as he is reciting, whether with quick recitation or with measured recitation."
Consider also the Hadeeth of the Messenger of Allah