Ramadan: A School for Training the Soul 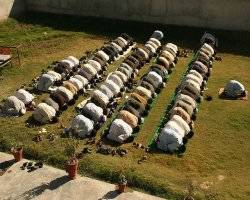 Ramadan is the month of piety and fasting. It helps one control oneself and make a commitment to piety. The verses about fasting in the Chapter Al-Baqarah start with (what means): {O you who have believed, decreed upon you is fasting as it was decreed upon those before you that you may become righteous} [Quran 2:183]. This is why fasting in Ramadan disciplines and trains Muslims. It teaches them patience and good morals and enables them to exercise these values, which last with them for the rest of their lives. That is why many Prophetic Hadeeths (narration) clarify the educational purposes of fasting. Abu Hurayrah, may Allah be pleased with him, narrated that the Messenger of Allah,

, said: "Whoever does not give up false statements (i.e. telling lies) and acting upon them, and intolerance, Allah Is not in need of his (fasting) leaving his food and drink." [Al-Bukhari].

It was also narrated on the authority of Abu Hurayrah, may Allah be pleased with him, that the Prophet,

, said: "If any one of you is fasting, he should neither indulge in obscene language, nor raise his voice; and if anyone reviles him or tries to quarrel with him, he should say: I am fasting."
In addition, Ibn Mas‘ood, may Allah be pleased with him, narrated that the Prophet,

, said: "Whoever among you can marry, let him marry, because it helps him lower his gaze and maintain his chastity, and whoever is not able to marry, he should fast, as fasting will be a shield for him (since it diminishes his sexual desire)." [Al-Bukhari and Muslim]
Thus, fasting is considered an expiation according to the Hadeeth narrated on the authority of Huthayfah, may Allah be pleased with him, in which the Prophet,

, said:  "The afflictions caused for man via his wife, money and neighbor are expiated by his prayers, fasting and charity." [Al-Bukhari]
Allah The Almighty has made a door to Paradise called Rayyaan for those who fast. Sahl ibn Sa‘d, may Allah be pleased with him, narrated that the Prophet,

,  said: "There is a gate in Paradise called Rayyaan, and those who observe fasts will enter through it on the Day of Judgment and no one except them will enter through it. It will be said, 'Where are those who used to observe fasts?' They will get up, and no one except them will enter through it. After their entry, the gate will be closed and nobody will enter through it." [Al-Bukhari and Muslim]
Another narration reads: "Paradise has eight gates, and one of them is called  Rayyaan through which no one will enter but those who observe fasting." [Al-Bukhari]
Fasting is a means of spiritual training for the Muslim in this world which helps him to control and discipline his desires, as well as elevate his rank in the sight of Allah The Almighty, and it opens a door of Paradise for him, from which he can enter. Fasting is obligatory in Ramadan and permissible in any other month. It is not forbidden except on the two ‘Eeds and the day of doubt (the last day of Sha'baan) and it is disliked on the Days of Tashreeq and on Friday or Saturday, when each day is fasted alone voluntarily.