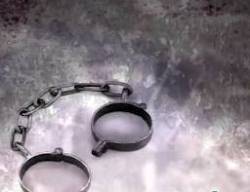 Ramadan is a month in which the devils are shackled, as the Prophet

informed us. Indeed, the chaining of the devils is one of the greatest means of overcoming them and shielding oneself against their perils. Abu Hurayrah

said: “When the month of Ramadan starts, the gates of Paradise are opened and the gates of Hell are closed and the devils are chained.” [Al-Bukhari, Muslim, Ahmad, and An-Nasaa’i]

said: “O people! A great month has come over you; a blessed month. During it, the gates to Paradise are opened and the gates of Hellfire are closed, and the devils are shackled. A month has dawned over you wherein lies a night better than a thousand months. Whoever is deprived of its good is indeed deprived.” [An-Nasaa’i: Saheeh]

The devils harm man, inflicting pain and suffering upon him. They whisper to man and incite him, foster corruption, and sow the seeds of discord among people. Devils may possess the bodies of people or whisper to them, inciting them to commit sins. If the devils are chained up during the month of Ramadan, then it is a great opportunity for man to overpower those devils and to destroy the Jinns, which possess human bodies.

What is the meaning of shackling or chaining up as stated in Hadeeths?

said in his book Al-Fat-h, "The Hadeeth indicates that the devils are shackled."

said, “The words of the Prophet

could be understood according to their apparent or intended meaning. It could mean that the devils are really chained up in the month of Ramadan or it may be a figurative expression indicating restraining them from harming and inciting humankind. Verily, this is a sign for the angels that the month of Ramadan has begun, an indication of the sanctity of Ramadan and a sign of restraining the devils from harming the believers."

"It could also be an indication of the abundant heavenly rewards and forgiveness in the month of Ramadan. It could point out that the ability of the devils to tempt and incite people wanes just like that of one who is chained up."

also said, "Shackling the devils indicates restraining and preventing them from tempting and inciting people to commit sins and beautifying lusts of the flesh and sinful desires."

cited the opinion of Al-Qurtubi

regarding the meaning of shackling the devils. He wrote, “It means that when people observe the due conditions and etiquette of fasting, the influence of their whispers grow less and wane. Fasting weakens the effects of the devils’ whispers on a person and reduces his sins.”

However, the words of the Hadeeth may mean that some devils, i.e. the most evil and rebellious ones are shackled, and not all of them, as mentioned in some narrations.

The words may also suggest that the evil of the devils becomes less as fasting weakens the effect of their whispers on a person, and this is a tangible fact. It is less likely for man to be influenced by Satanic evils and whispers while fasting.

said, “The devils are chained up in Ramadan according to the apparent meaning of the Hadeeth. However, it could also mean that the rebellious and most evil devils are shackled as some other narrations mentioned."

said, "The devils are shackled; they become unable to whisper to fasting people, inciting them to commit evil deeds like they used to do in other times. A shackled creature is restrained from doing whatever it wishes. Indeed, the devils are able to control and incite the sons of Aadam because of their lusts. If people abstained from satisfying those lusts, then the devils are chained."

used the word “chained” to describe the devils during the month of Ramadan. Anas