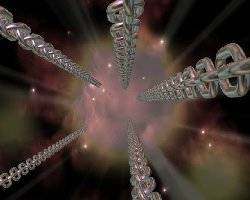 Based on the interpretations of our righteous predecessors and the opinions of the knowledgeable scholars on the meaning of shackling, we deduce the following:

What supports this interpretation is that the nature of the devils is different from that of humankind. It was mentioned in authentic Ahaadeeth that the devil does not approach the one who recites the verse of Al-Kursi before sleeping until he wakes up. How is the devil prevented from approaching this sleeping person?

Add to that, reciting the Basmalah (saying Bismillaah) serves as a shield against the Jinn. How is this possible?

The devils are influenced by the Ruqyah (healing with the recitation of the Quran) of a confident person more than that of a less confident person; how does this happen?

Glory be to Allah The Exalted who perfectly created this world and wisely and skilfully manages it.

Second: Shackling may indicate the inability of the devils to tempt and incite people through narrowing the channels of blood, in which the devils circulate due to fasting, as the devil flows through the son of Aadam just as blood flows through him. While fasting, the veins in the body become narrow due to hunger and thirst, which causes the passageways of the devil in the human body to become narrower. Therefore, by fasting, the whispers of the devil are held back and the strength of our desires and anger is controlled. The devils become unable to incite fasting people as they do with non-fasting ones. Thus, they are restrained from tempting people who carry out acts of worship, good deeds, and various acts that bring one closer to Allah The Almighty.

This meaning [that shackling indicates the inability of the devils to incite people while fasting in Ramadan] is backed by the following:

• The devil is far from a fasting person and unable to control him during the month of Ramadan or at any other time. However, the devil's inability to incite fasting people is far greater in Ramadan, depending upon the person’s compliance with the conditions and etiquette of fasting. Shaykhul-Islam Ibn Taymiyyah

said, "Whoever observes the due conditions and etiquette of fasting and perfects his fasting, he will be able to ward off the devils completely in a way that one whose fasting is deficient cannot."

A fasting person devotes his days to carrying out acts of worship in Ramadan, which wards off the devil. Indeed, fasting is a shield, unlike other acts of worship that have limited times during which the lurking devil waits for the worshipper to finish his worship act in order to incite him. In fact, fasting is a shield against the devil during the month of Ramadan or any other month of the year.

A fasting person refrains from satisfying his lustful and sinful cravings of the flesh with which the devil controls him, harming or inciting him to commit what is forbidden. If a person shields himself against his enemy, the devil, he will be able to weaken and vanquish him. This is not exclusive to the month of Ramadan.

Besides, fasting is an act of worship that involves endurance, will-power, and determination. If one attains an elevated spiritual rank and sharpens his faith and determination, he can overpower the devil and frustrate his evil plots and whispers. Indeed, the devil is weak. This is not exclusively for fasting in Ramadan – and Allah knows best.

For some people, it may be a curious paradox that people continue to commit sins in Ramadan, during which it is said the devils are chained up. There may be others who experience the whispers of the devil, and still others may go into convulsions due to being possessed by Jinn.

The paradox that some people continue to commit sins in Ramadan does not contradict the shackling of the devils. Dissolute evildoers among the Jinn and humans, who are not chained, may incite people to commit sins. Moreover, it could be due to people’s base desires, their souls that incline to evil, or the fact that they are used to committing sins.

said, "The fact that all the devils are shackled does not necessarily mean that no man would commit sins or evil acts. People sin due to other factors, aside from the devils, such as souls that are persistent enjoiners of evil, bad habits and the devilish people (devils of humankind)."

"Many people who are accustomed to sin may keep doing what they are habitually used to doing even during the month of Ramadan. Although the devils are chained up, still, old habits die hard. Therefore, we may witness many sins committed in Ramadan such as drinking alcohol, adultery, listening to songs and so on. The urges for such evil practices are bad habits, whims, souls inclined to evil, devils among humankind, base desires, temptations, the spread of lewd pictures and movies, and the like. It is not surprising to witness these sins during the month of Ramadan, even though the devils are shackled."