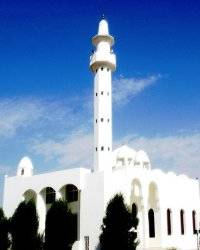 The nation of Islam is the last nation with the most recent divine message. Allah The Almighty, the Bountiful, the Generous made our Prophet,

, the master of all the Prophets and made our nation the most populous in Paradise and the one with the highest ranks. The Messenger of Allah,

·        “We (Muslims) are the last to come and the foremost on the Day of Resurrection though the former nations were given the Holy Scriptures before us.”[Al-Bukhari and Muslim]
·        “By Him in whose Hands is the soul of Muhammad, I hope that you will be one-half of the people of Paradise, for none will enter Paradise but a Muslim soul, and you, in comparison to the people who associate others in worship with Allah, are like a white hair on the skin of a black ox, or a black hair on the skin of a red ox.” [Al-Bukhari and Muslim]
Allah The Almighty has preferred us to all the other nations. He Says (what means): {You are the best nation produced [as an example] for mankind.} [Quran 3:110]
Allah The Almighty also made us witnesses over all other nations: {And thus we have made you a just community that you will be witnesses over the people and the Messenger will be a witness over you.} [2: 143]
The superiority of the nation of Islam over all other nations is not because it belongs to a specific race or because it speaks a specific language, or because of the distinctive looks of its members. Rather, it is because Allah The Almighty has chosen it to be the only religion that He The Exalted accepts and no other religion or belief will be accepted. Allah The Almighty Says (what means):{Indeed, the religion in the sight of Allah is Islam.}[Quran 3:19]
Consequently, whoever adheres strictly to the religion of Islam and abides by the orders of the Noble Quran, and follows the way of Prophet Muhammad,

, the best of human beings, will surely obtain the goodness mentioned in the verse and the promised reward. Whoever doubts the religion, lets his desires overcome him, follows his lusts, and deviates from the right way, will surely be excluded from the people of such honor.
Ibn Al-Qayyim, may Allah have mercy upon, said, “They are the followers of Muhammad

who have the soundest minds and natures, and the most knowledge. They are the nearest to the truth in all matters for Allah The Almighty has chosen them from all other nations in much the same way as their Messenger is the best of all other Messengers. No other nation has the knowledge, forbearance and wisdom with which Allah The Almighty has endowed them.”
Imaam Ahmad

reported in his Musnad from the Hadeeth of Bahz ibn Hakeem

from his father on the authority of his grandfather, may Allah be pleased with him, that the Messenger of Allah,

, said: “You are the final of seventy nations, you are the best and most honored among them to Allah.”
It is clear that the Muslims are the most honored nation in the sight of Allah The Almighty with respect to their knowledge and minds. Moreover, when the sciences, ideology, deeds and ranks of the nations that preceded them were displayed to them, they acquired even more knowledge and forbearance, besides what Allah The Almighty has endowed them with from His knowledge and forbearance.
As the nation of Muhammad,

, has the shortest age compared to the other nations, Allah The Almighty has gifted it some seasons in which the rewards are multiplied, ranks are raised, and sins are forgiven. The month of Ramadan, which the nation rejoices at receiving, is one of the best chances; the greatest seasons in which many will be redeemed from Hellfire, the ranks of the righteous will be raised high, and the sins of the wrong doers will be forgiven.
Many are the necks that are redeemed from Hellfire in Ramadan, and many are the people who are forgiven in it.
Imaam Maalik

said in Al-Muwatta’, “The Messenger of Allah

was shown the lifespan of the people (who had gone) before him, or what Allah willed of that, and it was as if he felt that the lives of the people of his nation were too short for them to be able to do as many good deeds as others before them had been able to do with their long lives, so Allah The Almighty gave him Laylat Al-Qadr, which is better than a thousand months.”
Welcoming Ramadan
At-Tabaraani narrated that Jaabir ibn Samurah, may Allah be pleased with him, said: The Prophet,

, ascended the pulpit and said: “Aameen, Aameen, Aameen.”Then, he said: “Jibreel came to me and said, ‘O Muhammad! He who lives until one of his parents becomes old, and then he dies and does not enter Paradise and he enters Hellfire, so let Allah The Almighty keep him away.’ It was said Aameen, so I said Aameen.”
This means that if a person grows up and one of his parents is still alive, and his kind treatment to them does not entitle him to receive the forgiveness of Allah The Almighty, then he should be expelled from the mercy of Allah The Almighty by the invocation of Jibreel, may Allah exalt his mention, and the Prophet,

, said: “He is doomed, the man who hears me mentioned and does not say Salaat (i.e. does not ask Allah The Almighty to send peace and blessings) on me. He is doomed, the man who witnesses Ramadan come and go and he is not forgiven. He is doomed, the man whose parents reach old age and they are not a cause for him to enter Paradise.”
It is as if forgiveness is granted to everyone in Ramadan and no one will be denied it except the one whom Allah The Almighty denies.
Sa‘eed narrated from Qataadah, may Allah be pleased with them both, that it was said, “Whoever does not receive forgiveness in Ramadan, will not be forgiven in any other month.” This is to highlight the serious danger of the neglectful person, and not to make people despair of the mercy of the Most Great and Most Just.