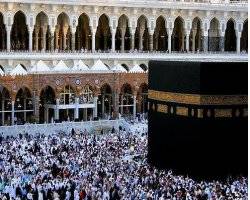 , said:“When Ramadan comes, the gates of Paradise are opened, the gates of Hellfire are closed, and the devils are chained up.”  [Al-Bukhari and Muslim]

At-Tirmithi and An-Nasaa’i narrated from the Hadeeth of Abu Hurayrah, may Allah be pleased with him, about the coming of Ramadan: “And a caller cries out: ‘O seeker of good, proceed! O seeker of evil, desist! And Allah has those whom He redeems from Hellfire, and that happens every night.”
At-Tabaraani narrated that the Prophet,

, said:“Paradise is adorned and bedecked round the year for Ramadan and when the first day of Ramadan comes the Hoor (celestial maidens) say:"O Allah! Provide us in this month with our husbands from among Your servants so that we are pleased with them and they are pleased with us.”
Indeed, how can the month of Ramadan not be the month of mercy and forgiveness when the Messenger of Allah,

, said: “And from one Ramadan to the next is expiation for (sins committed) in between, so long as major sins are avoided.” [Muslim]
How can the month of Ramadan not be the month of mercy and forgiveness while the beloved Prophet,

, narrated that Allah The Almighty said:
“Every deed of the son of Adam will be rewarded between ten and seven hundred-fold except fasting, for it is for Me and I shall reward for it, for he gave up his desires, his food and his drink for My sake. There are two pleasures for the fasting person, one at the time of breaking his fast, and the other at the time when he will meet his Lord. The breath of a fasting person is better in the Sight of Allah than the smell of musk.”[Ahmad, and its origin is in As-Saheeh]
Moreover, Ibn ‘Umar, may Allah be pleased with them, said, “Fasting is for Allah. No one knows the reward of it except Allah The Almighty.” [At-Tabaraani]
Sufyaan ibn ‘Uyaynah

said, “Opponents (on the Day of Judgment) will not take from the rewards the person acquires through fasting. Allah will preserve them for the fasting person until He admits him to Paradise because of them.”
Some of our pious predecessors once said, “Tooba (all good things) for the one who gives up an existing desire for an unseen time which he has never witnessed.”
Furthermore, the fasting person will eat, drink and have sexual intercourse in Paradise what Allah The Almighty wills for him. Allah The Almighty Says: {[They will be told], "Eat and drink in satisfaction for what you put forth in the days past."} [Quran 69: 24]
Mujaahid

and others said about this verse, “It was revealed about the fasting person.”
The Messenger of Allah,

, said:
·        “You will never give up anything due to fearing Allah The Almighty except Allah will give you what is better than it.” [Ahmad]
·        “In Paradise, there is a gate called Ar-Rayyaan, through which those who used to fast will enter on the Day of Resurrection, and no one but they will enter it.”[Al-Bukhari and Muslim]
·        And, in another narration: “Whoever enters from it, he will drink and whoever drinks from it, he will never experience thirst.” [Ahmad]
·        "My nation is given five privileges in the month of Ramadan that no nation was given before: The smell coming out of the mouth of a fasting person is sweeter in the sight of Allah than the fragrance of musk. The angels keep praying to Allah to forgive them (i.e. those who are fasting) until they break their fast. Allah decorates Paradise every day saying to it: 'My pious slaves are about to be relieved of their burdens and sufferings and enter you'. The rebellious devils are chained in this month so they cannot achieve what they usually achieve (at other times). The believers' sins are forgiven by the last night of Ramadan.” Someone asked the Messenger of Allah,

, “Is it the night of Al-Qadr?” He said: “No. But the laborer is paid upon finishing his task.” [Ahmad]
Ramadan is the month of the Quran, which Allah The Almighty bestowed upon humanity and by which He honored them. Allah The Almighty Says (what means): {The month of Ramadan [is that] in which was revealed the Quran, a guidance for the people and clear proofs of guidance and criterion. So whoever sights [the new moon of] the month, let him fast it; and whoever is ill or on a journey - then an equal number of other days. Allah intends for you ease and does not intend for you hardship and [wants] for you to complete the period and to glorify Allah for that [to] which He has guided you; and perhaps you will be grateful.} [Quran 2: 185]
Ibn ‘Abbaas, may Allah be pleased with them, the eminent exegete of the Quran said, “The Noble Quran was sent down in Ramadan on the night of Al-Qadr and on a blessed night all at one time. Then it was sent down at the setting positions of the stars in the sky to be recited in months and days.”
Is not the one who is deprived of all such goodness truly deprived?
Is not the one who sees the month come and go and does not receive the great share of forgiveness and mercy truly aggrieved?
The eight gates of Paradise are opened in this month for the Muslims, the gates of Hellfire closed and Shaytaan (Satan) and his offspring are chained up: where are those who would toil towards this end?