The Virtues of Charity 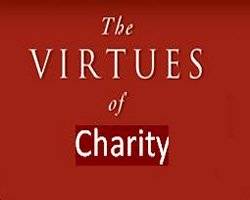 Charity has a great significance in Islam; it is one of the clearest indications and most truthful signs of the sincerity of one's faith, as souls were created to love money and strive to save it. If someone spends his money and contradicts his instinct, then this is a proof that he has a good faith and a sound belief.

Regarding this, the Prophet

One of the specific characteristics of the righteous servants of Allah, The Almighty, is spending on the poor and the needy; Allah, The Almighty, Says (what means): {Indeed, they were before that doers of good. They used to sleep but little of the night. And in the hours before dawn they would ask forgiveness. And from their properties was [given] the right of the [needy] petitioner and the deprived.} [Quran 51:16-19]

Allah, The Exalted, has promised – and He is the Generous who does not break His promise – to compensate those who spend for His Sake. Allah Says (what means): {Say, "Indeed, my Lord extends provision for whom He wills of His servants and restricts [it] for him. But whatever thing you spend [in His cause] - He will compensate it; and He is the best of providers].} [Quran 34:39]

Allah also promised to multiply their rewards many times; Allah, The Almighty, Says (What means): {Who is it that would loan Allah a goodly loan so He may multiply it for him many times over? And it is Allah who withholds and grants abundance, and to Him you will be returned.} [Quran 2:245]

Giving money is one of the types of Jihaad (striving in the cause of Allah, The Almighty); rather, Jihaad with one’s own money precedes Jihaad with one`s own self in all the verses that mentioned Jihaad except in one place in the Quran.
Also, the Prophet

said: "Fight the polytheists with your wealth, yourselves, and your tongues." [Abu Daawood]

There are many Ahadeeth (narrations) in the Sunnah (Prophetic tradition) which encourage giving charity and clarify that its reward is a comfort to the eye of the believers and a delight to their hearts. These Ahadeth mention that charity is one of the best acts of worship that is beloved to Allah, The Almighty.

said: “The most beloved acts of worship to Allah are: happiness that you bring to a believer’s heart, relieving his distress, paying off his debt or driving away his hunger.” [Al-Bayhaqi] [Al-Albaani: Hasan]

Charity elevates its giver to the highest rank; the Prophet

said: “This worldly life is for four categories of people: a man to whom Allah has given wealth and knowledge, so he fears his Lord, maintains ties of kinship with this money, and he knows the rights of Allah regarding it, this one is truly in the best rank ...” [At-Tirmithi]

Charity protects its giver from calamities and misfortunes, and saves him from distress and hardship; the Prophet

said: “Performing good deeds protects from bad ends and calamities, and those who act righteously in this world will be the good people in the Hereafter.” [Al-Haakim] [Al-Albaani: Saheeh]

Consider this Hadeeth which signifies the multiplied reward of charity: The Prophet

said, “No one gives charity out of his honest earning –and Allah accepts only what is from lawful earning – but The Most Merciful accepts it with His right hand even if it is only a date, and then fosters it as one of you fosters a colt or a young she-camel, till it becomes like a mountain or even greater.” [Muslim]

It is one of the greatest causes for attaining blessings in money, the increase of provision, and compensation from Allah, The Almighty, with what is best. The Prophet

said: “Allah The Almighty Says, ‘O son of Adam, spend and I will spend on you.” [Muslim]

It is also protection from the punishment of Allah; the Prophet

said: “Protect yourselves from the Fire, by giving in charity even half a date.” [Al-Bukhari]
Spending in charity is an indication of the sincerity of one's faith, strength of certitude, and having good expectations from the Lord of the worlds. Besides, it has many other virtues which make the believer look forward to the reward of Allah, The Almighty, and overlook the whispers of the devil who frightens him with poverty, and beautifies for him stinginess and miserliness. Allah, The Almighty, Says (what means): {Satan threatens you with poverty and orders you to immorality, while Allah promises you forgiveness from Him and bounty. And Allah is all-Encompassing and Knowing} [Quran 2:268]

We ask Allah, The Almighty, to enable us to spend for His Sake, and to protect us from being stingy, for He is able to do all things.