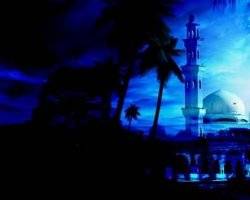 Qiyaam (voluntary night prayer) is one of the best acts of worship that bring one closer to Allah The Almighty. It is highly recommended at all times of the year, and even more so in the holy month of Ramadan. The texts of the Quran and Sunnah (Prophetic tradition) urge Muslims to perform it and they state its unique status and great reward from Allah The Almighty.

Allah The Almighty praises the people of faith with certain characteristics and deeds, one of the most noble of these deeds is their night prayer. Allah The Almighty Says (what means): {Only those believe in Our verses who, when they are reminded by them, fall down in prostration and exalt [Allah] with praise of their Lord, and they are not arrogant.They arise from [their] beds; they supplicate their Lord in fear and aspiration, and from what We have provided them, they spend And no soul knows what has been hidden for them of comfort for eyes as reward for what they used to do} [Quran 32:15-17]
Allah The Almighty describes His faithful slaves Saying (what means): {And those who spend [part of] the night to their Lord prostrating and standing [in prayer]} [Quran 25:64] He describes the righteous people as the ones who pray at night and seek His forgiveness before dawn; He Says (what means): {Indeed, the righteous will be among gardens and springs Accepting what their Lord has given them. Indeed, they were before that doers of good. They used to sleep but little of the night, And in the hours before dawn they would ask forgiveness} [Quran 51:15-18]
The night prayer plays a significant role in making one's faith firm and helping one bear the burden of calling to Allah The Almighty. Allah The Almighty ordered His Prophet,

, to adhere to it Saying (what means): {O you who wraps himself [in clothing]Arise [to pray] the night, except for a little -Half of it - or subtract from it a little.Or add to it, and recite the Quran with measured recitation.Indeed, We will cast upon you a heavy word.Indeed, the hours of the night are more effective for concurrence [of heart and tongue] and more suitable for words.} [Quran73:1-6]
There are many Hadeeths (narrations) that show the virtues of the voluntary night prayer and that it is the habit of the righteous people of all nations. The Prophet,

, said: “Adhere to the night prayer, for it was the habit of righteous people before you, a means of seeking closeness to your Lord, an expiation for sins, and a deterrent against committing sins.” [Al-Haakim]
It is the best prayer after the obligatory prayer; in an authentic Hadeeth the Prophet,

, said: “The best prayer after the prescribed prayers is praying in the middle of the night.” [Muslim] He,

, also said: “The closest a person gets to his Lord is in the middle of the night, so try to be one of those who remember Allah at that hour.” [At-Tirmithi]
One of the greatest causes of having one's supplication answered is praying at night; ‘Amr ibn ‘Anbasah As-Sulami, may Allah be pleased with him, said, “I asked the Messenger of Allah

in which part of the night is one's supplication more likely to be accepted? He replied: ‘In the last part of the night, so pray as much as you like, for the prayer is witnessed and recorded (by the angels) till you offer the dawn prayer.” [Abu Daawood] And also Jaabir, may Allah be pleased with him, said that he heard the Messenger of Allah,

, saying: “There is an hour during the night in which no Muslim individual will ask Allah for good in this world and the next without His giving it to him; and that applies to every night.” [Muslim]
The night prayer is one of the means of entering Paradise and attaining its high grades; Abu Maalik Al-Ash‘ari, may Allah be pleased with him, said: The Messenger of Allah,

, said: “There are chambers in Paradise, its outside can be seen from its inside, and vice versa, Allah prepared them for those who speak tenderly, feed others, fast continuously, and pray at night while people are sleeping.” [Ahmad]
Dear reader, be sure to perform the night prayer on a daily basis, even if it is little so as not to be one of the heedless; the Prophet,

, said: “Whoever observes the night prayer even with the length of reciting ten verses he will not be recorded as heedless.” [Abu Daawood] Be sure to pray Taraaweeh (voluntary night prayer) during this holy month, and do not leave until the Imaam leaves so as to receive the reward of praying the whole night; the Prophet,

, said: “Whoever prays the night prayer with the Imaam until he finishes the prayer, will receive the reward of praying the whole night.” [At-Tirmithi]
May Allah The Almighty accept our prayer and fasting, and help us to obey Him at all times.