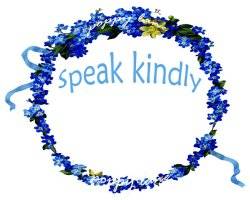 The people most worthy of being treated with kindness and noble morals are one's parents, to whom Allah The Almighty enjoined dutifulness and kind treatment. This includes choosing good words when talking to them. Allah The Exalted Says (what means): {And your Lord has decreed that you not worship except Him, and to parents, good treatment. Whether one or both of them reach old age [while] with you, say not to them [so much as], "uff," and do not repel them but speak to them a noble word.} [Quran 17:23] Abu Hurayrah

"A man came to the Messenger of Allah

and said, ‘O Messenger of Allah! Who is the most entitled to my good companionship?’ The Prophet

said: ‘Your mother.’ The man said, ‘Who is next?’ The Prophet

said: ‘Your mother.’ The man further said, ‘Who is next?’ The Prophet

said: ‘Your mother.’ The man asked for the fourth time, ‘Who is next?’ The Prophet

said, "I saw (in a dream) that I entered Paradise and heard in it a recitation (of Quran). I asked, ‘Who is this?’ And it was said, ‘It is Haarithah ibn An-Nu‘maan.’ I said, ‘This is (the reward of) kindness (toward parents); this is kindness." [Al Haakim]

Many of our righteous predecessors were barely heard when talking to their mothers because they were keen to lower their voices out of politeness. How far removed were they from the young men and women nowadays, who treat their parents harshly, raise their voices at them, repel them and are unkind to them. They harm them with their ill logic to the extent that whoever sees them without knowing that these are their parents may imagine that they are servants working for the children because of the harshness and the cruel words used by the children with their parents. We ask Allah The Almighty to guide them and us!

There is no doubt that soft words are needed also between spouses; as the base upon which houses are established is mercy and affection. Allah The Exalted Says (what means): {And of His signs is that He created for you from yourselves mates that you may find tranquility in them; and He placed between you affection and mercy. Indeed in that are signs for a people who give thought.} [Quran 30:21]

Spouses must choose for the other the best words to communicate and express feelings of love and mercy towards each other. Consider this affectionate Hadeeth (narration) between the Prophet

the Mother of the Believers:

. She kept silent for a moment, then she said,

"One night the Prophet

said: ‘O ’Aa’ishah, let me worship my Lord tonight.’ I said, ‘By Allah, I love being near you and I love what pleases you.’ He got up and purified himself. He stood up praying and he kept weeping till he wetted his lap, then he kept weeping till he wetted his beard and he kept weeping till he wetted the ground. Bilaal came to call for the prayer. When he saw him weeping, he said, ‘O Messenger of Allah, why do you weep while Allah has forgiven you all that passed and all that is to come of your sins?’ He replied: ‘Should I not be a thankful slave? A verse was revealed to me tonight; woe to the one who reads it and does not reflect upon it, it is the verse (which means): {Indeed, in the creation of the heavens and the earth and the alternation of the night and the day are signs for those of understanding.}[Quran 3:190]’" [Ibn Hibbaan] [Al-Albaani: Saheeh]

Dear brother and sister, make your tongue used to good words and know that Allah The Almighty does not allow the public mention of evil except in specific situations such as a genuine grievance. He Says (what means): {Allah does not like the public mention of evil except by one who has been wronged. And ever is Allah hearing and knowing.} [Quran 4:148] The Muslim should treat all people kindly, whether relatives or strangers, and get his tongue used to uttering good words and avoiding bad ones.

We ask Allah The Almighty and Exalted to help us obey and please Him, to guide us in all our words and deeds, to inspire us to utter the right words and protect us from errors in words and deeds out of His bounty and generosity.