Keeping Up The Good Work 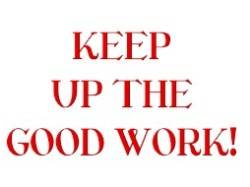 In Ramadan, people pray, fast, perform ‘Umrah (the minor pilgrimage), spend in charity, supplicate and recite the Quran, yet the question remains: have any of these good deeds been accepted? Allah The Almighty Says (what means): {…Indeed Allah only accepts from the righteous [who fear Him].}[Quran 3: 27] Fudhaalah Ibn ‘Ubayd, may Allah be pleased with him, would say, “If I knew that Allah had accepted from me (something) as minor as a seed’s weight of good deeds, then that would be more beloved to me than possessing this world and all that it contains, because Allah Says: [the above-mentioned verse].” Our righteous Salaf (predecessors), may Allah be pleased with them, would exert extra efforts in worship and then rebuke themselves and doubt that their deeds were even accepted by Allah The Almighty. They were described by Allah The Almighty as (what means): {And they who give what they give while their hearts are fearful}[Quran23: 60] They would be far more concerned about the acceptance of the deeds than the amount of good deeds they performed.

What good is left for those who miss out on the virtue of Ramadan? What greater disaster is there for them, than being deprived of the mercy and forgiveness of Allah The Almighty in this month? Moreover, the pious people from whom Allah The Almighty accepts righteous deeds have one distinctive trait, which is refraining from sinning after the end of Ramadan.
Many people think that since they have performed scores of good deeds they can rely on these deeds, believing that they have enough good deeds in their record. However, the genuine pious people are those who continue to be devout worshippers even after the conclusion of the month. When Allah The Almighty describes the devout believers and worshippers, He does not restrict their devotion and obedience to a limited period; rather, He describes them to be this way always, not only during Ramadan.
He Says (what means):{Certainly will the believers have succeeded: They who are during their prayer humbly submissive. And they who turn away from ill speech. And they who are observant of Zakah. And they who guard their private parts.} [Quran 23: 1-5]
Muslims are commanded to be devout worshippers until death. Allah The Almighty Says (what means): {And worship your Lord until there comes to you the certainty [i.e., death].} [Quran 15: 99] One must persevere in worshipping Allah The Almighty and being obedient to Him. This may be the reason why it was legislated for us to fast six optional days in the month of Shawwaal (which directly follows the month of Ramadan) and this was made equivalent in reward to fasting for the whole year, because the reward is multiplied tenfold. Therefore, the thirty days in Ramadan are equal to three hundred days, while the six that follow in Shawwaal are equal to sixty more days – which constitutes a full year, in terms of reward.
Many people are deceived by the acts of worship they perform during Ramadan. They exert great efforts in completing the whole Quran once in Ramadan – with some even completing it several times – and praying the Taraaweeh (voluntary night prayers). Others might wait in the Masjid after the end of one prayer till the time of the next one, and be engaged in mentioning Allah The Almighty from the Fajr (morning) prayer until sunrise (the reward for which is like that of performing a Hajj and an ‘Umrah). However, although they perform all these deeds, they are not inwardly sincere and their intentions may become corrupted and impure. Shaytaan (Satan) may whisper to them, making them feel that, having performed all these good deeds, they have accumulated mountains of rewards, and that their balance is therefore very high. This makes them become arrogant and they may start slackening in their worship.
However, if one recalls a single verse from the Quran, such thoughts and feelings would immediately cease. It is the Saying of Allah The Almighty (which means):{And do not confer favor to acquire more.}[Quran 74: 6]
How can anyone possibly confer favors upon Allah The Almighty? How can one dare feel this way, simply because they performed a good number of deeds – as if they have bestowed a favor on Allah The Almighty by doing them? With this verse, Allah The Almighty addressed the Prophet,

, warning him from being deceived with the worship he was performing, so that he would not become arrogant. If one should ever feel that they have performed plentiful acts of worship, then they should compare their deeds with those of the Prophet,

. In order to clarify the matter in people’s minds, the Prophet,

, said: “If a man was to be dragged on his face from the day he was born until he died, for the sake of pleasing Allah, he would belittle his deeds on the Day of Resurrection.”Thismeans that one would find all he did insignificant and worthless in comparison to a single favor bestowed upon him from his Lord, like, for example, the favor of eyesight.
Therefore, we should realize that people are not granted Paradise due to their own good deeds, but because of the mercy of Allah The Almighty. People’s deeds are not the price for Paradise; they are a means to gain the mercy of Allah The Almighty, by which one is admitted into Paradise. To conclude this point, we remind the Muslims that despite the obligation of continuing upon obedience and the performance of good deeds after Ramadan, one should not overburden himself by attempting to do more good deeds than he can bear.
There are great benefits for those constantly striving in obedience and worship. One cannot necessarily be as keen in doing acts of worship after Ramadan as they were during it, because, Ramadan is a magnificent and unique period, and there is none other like it. However, one should have acquired sufficient training during Ramadan to carry on the good work.