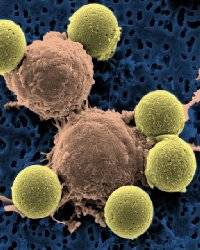 The findings are the first to show how gene transfer therapy can make specialized T-cells, which guard the body from infection, that attack cancerous tumors in advanced cases of chronic lymphocytic leukemia (CLL).
The technique helped patients who had little hope of survival fend off their cancer and stay in remission, said the research published simultaneously in the New England Journal of Medicine and Science Translational Medicine.
Further studies are needed, but the advances offer hope to people who suffer from similar cancer types such as ovarian, lung, myeloma and melanoma.
"Within three weeks, the tumors had been blown away, in a way that was much more violent than we ever expected," said senior author Carl June of the Abramson Cancer Center of the University of Pennsylvania.
"It worked much better than we thought it would."
Scientists removed a sample of the patients' T-cells and genetically modified them to attack all cells that express a certain kind of protein, CD19, which includes tumor cells.
They also engineered the T-cells to start triggering other T-cells to multiply as soon as they attached to a cancer cell, bringing on a faster death for the tumor but avoiding the side-effects of cancer drugs.
"We saw at least a 1,000-fold increase in the number of modified T-cells in each of the patients.
Drugs don't do that," said June, describing the infused T-cells as "serial killers."
"On average, each infused T-cell led to the killing of thousands of tumor cells -- and overall, destroyed at least two pounds of tumor in each patient."
One patient's case, described in the New England Journal of Medicine, involved a 64-year-old man whose blood and marrow were "replete with tumor cells."
He saw little change for the first two weeks after treatment, but then started experiencing nausea, chills and fever. Test showed he was undergoing a huge rise in T-cell count. By day 28, his blood showed no evidence of leukemia.
"Most of what I do is treat patients with no other options, with a very, very risky therapy with the intent to cure them," said co-principal investigator David Porter.
"This approach has the potential to do the same thing, but in a safer manner."
Bone marrow transplants are typically the only treatment for leukemia patients, but they carry a 20 percent risk of dying from the procedure and cure rates hover at around 50 percent.
It remains unknown how long the treatment may keep cancer at bay.
"The doctors have found evidence that months after infusion, the new cells had multiplied and were capable of continuing their seek-and-destroy mission against cancerous cells throughout the patients' bodies," said the study.
Chronic lymphocytic leukemia is the second most common type of adult leukemia after chronic myeloid leukemia, according to the National Cancer Institute.
The researchers intend to study similar approaches in children whose leukemia has resisted standard treatment.
They also want to see if the approach could target non-Hodgkin's lymphoma and acute lymphocytic leukemia, mesothelioma cancer cells, ovarian and pancreatic cancer cells.
PHOTO CAPTION
This microscopy image provided by Dr. Carl June on Wednesday, Aug. 10, 2011 shows immune system T-cells, center, binding to beads which cause the cells to divide. The beads, depicted in yellow, are later removed, leaving pure T-cells which are then ready for infusion to the cancer patients.
Source: AFP