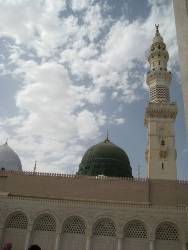 During his lifetime, the Prophet,

, moved and traveled extensively through the Arabian Peninsula and ancient Syria, as a worshipper, a caller to Allah The Almighty, a migrant, conqueror, commander, and pilgrim. Most of his travels were after the Prophetic Mission.

, was born in Makkah on the twelfth of Rabee` Al-Awwal, fifty three years before the migration. In this holy city, the Prophet,

married Khadeejah, may Allah be pleased with her, and had six children: Al-Qaasim, `Abdullaah, Zainab, Umm Kulthuum, Ruqayyah, and Faatimah.

Islam first emerged in Makkah and the Prophet,

, started to spread his call among the people. The Prophet,

, called them to monotheism and to abandon idolatry. Some of his senior Companions believed in him, including Abu Bakr As-Siddeeq, `Umar ibn Al-Khattaab, `Uthmaan ibn `Affaan, `Ali ibn Abi Taalib, and `Abdullaah ibn Mas`ood, may Allah be pleased with them all.

The wife of the Prophet,

, the Mother of the Believers, Khadeejah, may Allah be pleased with her, believed in him and she defended and supported him as much as she could. The Prophet,

, spent thirteen years in Makkah actively calling people to embrace Islam. He and the believers bore all types of suffering and torture in the way of Allah The Almighty. Later, the Prophet,

, migrated to Madeenah, where he found support and aid until he spread his call and established a Muslim state.

, continued to remember Makkah, where he had spent his childhood and where the revelation had begun. He,

, said:  “By Allah, you are the best land of Allah in the sight of Allah and you are mostly loved by Allah. If I had not been obliged to leave you, I would have never left you.”

, at the head of ten thousand Companions, may Allah be pleased with them, returned to Makkah and conquered it. It was a memorable day on which the idols around the Ka`bah were destroyed. The Prophet,

, pardoned the very people who had persecuted him, and let them go unharmed.

·        Busra:This is a city in modern Syria with some remaining ancient monuments. The Prophet,

, accompanied by his uncle Abu Taalib, visited this city when he was young. This was during a business trip to the Levant. During this trip, Abu Taalib met a monk called Baheerah, who looked at the Prophet,

, and saw the signs of prophethood on his face and between his shoulders. The monk asked Abu Taalib, “What is the relation between you and this child?" Abu Taalib replied, “He is my son.” The monk said, “His father cannot possibly be alive!” Abu Taalib said, “He is actually my nephew and his father died when his mother was pregnant with him.” The monk said, “You have told the truth. Take him back to your town and guard him.”

·        The Cave of Hiraa':This cave lies in a mountain some kilometers away from Makkah. Before his mission, the Prophet, sallallaahu `alayhi wa salam, used to go to this cave and worship Allah The Almighty there, away from the hustle and bustle of Makkah. In this quiet cave, he used to contemplate the universe and the creations of Allah The Almighty and His Kingdom.

One night in the month of Ramadan, Jibreel, may Allah exalt his mention, was sent down with revelation and said to the Prophet: “Read”. The Prophet,

, replied: “I do not know how to read.” Jibreel, may Allah exalt his mention, repeated the request and the Prophet,

, repeated his first answer. Then, Jibreel, may Allah exalt his mention, recited the first verses of Chapter Al-`Alaq in which Allah The Almighty Says (what means):{Read! In the Name of your Lord, Who has created (all that exists,has created man from a clot (a piece of thick coagulated blood. Read! And your Lord is the Most Generous, Who has taught (the writing) by the pen [the first person to write was Prophet Idrees (Enoch)] has taught man that which he knew not.}[Quran 96: 1-5] 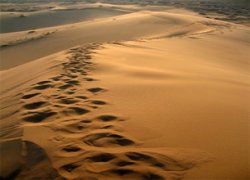