Be What You Want Your Child To Be 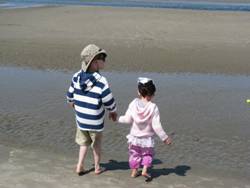 These are words that should be addressed to parents and mentors in order to achieve a general benefit: Whoever likes his child to be something, should first be that something.

Be a positive role model:

If you are not fair, in no way can you be able to judge between two opponents even in a trivial case. Being so, what do you think of the whose case occupies you throughout your entire life? You would not be able to direct your child in the manner you like if he feels you prefer his brother over him. That is the kind of injustice which the child never accepts, as the Messenger of Allah, , did not accept earlier.
Be with him part of his time

Dear parents, you have no valid excuse before Allah The Almighty, nor any argument that is acceptable to the child to justify your failure to find a specific time to sit with him, which is his right over you and everyone should be given his due right. That is also the trust of responsibility, and Allah The Almighty commands you to give back the trusts to those who are liable to them. O you who leave your child to others to bring him up on your behalf; do not weep on the morrow because you are held guilty (for his negligence of you) for as you waste him when he is a child, he shall waste you when you grow old.

Frequent blame and reproach for everything, whether or not it is significant, inevitably leads to adverse results, the child would neither follow the given advice, nor would he give up (the mistake). The result would be that you would lose your position of awe and reverence in the sight of your child, who, in turn, would leave you and refrain from listening to you. Anas, may Allah be pleased with him, served the Prophet, for ten years, during which time he never heard from him (any word of rebuke even as trivial as) 'Uff'.

Utilize suitable opportunities and current events to implant all the values and morals you like in the heart of your child. What you give your child would then be imprinted in his heart, and become inerasable. The Messenger of Allah

Similarly, the Messenger of Allah, , rescued the boy before bad habits were inculcated in his breast, and said to him once he noticed any kind of bad behavior: "O boy! mention the Name of Allah, and eat with your right hand and eat of what is nearer to you (in the dish)." [Al-Bukhari] The boy then did not forget it, as shown in his comment, "Since then I have applied those instructions when eating."
Be a storyteller:

A story has the influence of magic on the soul. It absorbs the child's mind and makes him live with its heroes. So, it is due on you, father and mother in particular, to pay special attention to relating stories to children. One-third the Noble Quran consists of stories about ancient people. Moreover, the Prophetic Sunnah contains many authentic stories. Therefore, you should employ those stories to be a source of reflection and giving lessons, as stated by Allah The Almighty when He Says (what means): {There was certainly in their stories a lesson for those of understanding.} [Quran 12:111]

Be patient when listening to the needs of your child, keeping in mind that you are talking to someone with limited mental faculties, so you should speak to him according to his understanding. Your perfect example, the Prophet, , tolerated and was patient with ‘Aa’ishah, may Allah be pleased with her, while she was reclining against his back, looking at the display of the Abyssinians. In this context, she said, "(I continued watching) till I was bored” So you may deduce from this event how a little girl (who had not reached the age of puberty) who is eager to enjoy amusement should be treated in this respect."

Dear parent, let each of you be a companion (to his child), so that you would attract him. No doubt, keeping company has a great impact on the child, and makes his heart like a blank page having all that the mother and father like to be imprinted on it. However, you are not the only companion of the child: there are evil friends who do their best to ruin what you build. So, occupy all the time of your child with your company, and be conscious before your child is stolen from you while you are heedless. Your company pleases him so much, and encourages him to relate his affairs to you and divulge his secrets. So, be his companion, encourage him and praise him a lot. Ibn ‘Umar, may Allah be pleased with him, never left the night prayer after he heard the words of the beloved Prophet, : "What an excellent man ‘Abdullaah is! Were he to pray at night." [Al-Bukhari]

Dear parent, do not throw the seed (in the land) and then go and leave it, saying to yourself: I have been cultivating . However, you should wait for the harvest, otherwise, the blight of evil and corruption would come after you to eat your crop before you pluck its fruits. So, you should watch over your child in his morals, particularly truthfulness, for lying is the basis of all vices. When the Messenger of Allah, , liked to prevent a man from all kinds of evil, he said: "Do not lie." Watch over him in his friends and peers. Watch over him in his physical constitution and seclusion. Be careful, lest there arise factors that try to ruin what you have been building throughout the years, seeking the help of Allah The Almighty at all times.