Protecting our Children from Lying - II 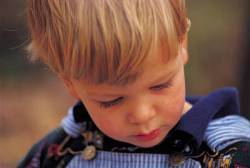 How can a mother know that her child is lying?

It should be known that lying has many signs that are visible on the child which an intelligent mother could notice, and they reveal it in the same way that is imitated by the following proverb: "The (sinful) suspicious (with his behavior) is about to say (to those who doubt him), 'Take me (as I am sinful).'"

·        Faltering in speech, trouble and contradiction between the different details of the fabricated story which the child is relating.

·        Some physical symptoms, which appear on him clearly like sweating, redness of the face, increased breathing rate and coldness of limbs.

·        The child cannot look his father or mother in the eye, and tries to end the situation quickly and turn away from his parents.

·        The child makes many oaths without being asked to do so, and does his best to deny he is a liar without being accused of lying. In confirmation of that, Allah The Almighty Says on the tongue of the brothers of (Prophet) Yoosuf (Joseph), may Allah exalt his mention, in an attempt to negate lying from themselves before their father accused them (what means): {"But you would not believe us, even if we were truthful."} [Quran 12:17]

However, the most important question is to ask: Why does the child lie?

There are several causes and motives for a child's lying. Knowing the motives for his ill behavior is the first step towards its sound treatment, and provides the parent whose children make the same mistake, with an outline of the features of preventive upbringing against that ill behavior. Then, what are the motives for children's lying?

This kind of lying is prevalent among children of four and five years. It goes back to the child's extensive imagination and insufficient awareness of the reality. He indeed confuses what is real and what is imaginary. He relates some of his dreams as realities that he has seen with his eye, or tells about things which have not taken place. This kind of lying indicates the child's extensive and rich imagination. It may go back to the child's desire for self-assertion.

There is, indeed, nothing to worry about it, since it develops the child's linguistic fluency and capability of representation and figurative use of language, provided that the parents give the child the impression that this is another world quite different from the reality in which we live.

The child lies in order to compensate for a feeling of inferiority that he suffers from, regardless of whether it is real or imaginary, or to become prominent in front of his peers.

Usually, children resort to this kind of pretentious lying if they feel inferior to others, whether in a position or excellence, thereupon they pretend to have what they do not have, just to support their weak position at least as they feel it.

The child resort to it in order to safeguard himself or escape from punishment. That kind of preventive lying is the most widespread among children, for it is directly related to their mistakes, or due to disruptive and destructive behavior in the house, such as  defacing the house or the belongings of others. If either of the parents faces the child with the mistake, chaos or even destruction he has done, he soon starts to deny insistently, which may force him to swear falsely. He does all of this for fear of, and in the hope of avoiding the punishment that he expects to receive.

In this kind, the child tries to avert the accusation from himself, and instead attribute it to another person whom he dislikes or is jealous of and could not face directly. It is the most dangerous kind of lying on psychological health, as well as on the community's entity, ideals and principles, for lying because of hatred and resentment is willful and requires planning and contriving in order to cause harm to the intended person whom he dislikes. This behavior is usually accompanied by psychological tension and pain.

It is that in which the child imitates the behavior of the adults surrounding him, who lie carelessly.

This bad example may exist in the house or at school. However, if the child is brought up in an environment where people are deceitful, evasive and doubtful, he is more likely to deal with those surrounding him according to the ill behavior. Hence, he lies when dealing with the others in general.

After this presentation of the causes, motives, forms and signs of lying among children, it is time to answer the important question raised by the parent or the mentor: Could I cure my child from lying? Is it possible for me to prevent my children from lying?

Yes, you could utilize the means of treating this blameworthy disease, after seeking the aid of Allah The Almighty, by removing its causes and motives.

Protecting our Children from Lying - I