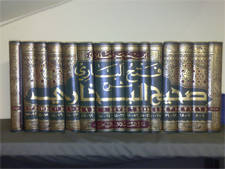 In this article, we will present further evidence in support of the authority of the Sunnah and the necessity of obeying and following Prophet Muhammad

. The evidence of ‘Ismah and the unfeasibility of implementing the Quran without the Sunnah are summarized here from, “Hujjiyyatus Sunnah wa Taarikhuha,” or the ‘Authority of the Sunnah and its History’ by Houcine Chouat.

‘Ismah is the infallibility and the perfection of Muhammad

as a prophet, a caller to, and a deliverer of Allah's message.

but all of Allah's prophets and messengers, may Allah exalt their mention, they cannot and will not do anything that decrease from their perfect and honest delivery of their message or taint it.

And because of this ‘Ismah, Prophet Muhammad

was protected from and against hiding or doubting any part of it, secured from Satan's whispers and ticks, safe from mistakes and omissions in all that he said or did. He was trained to act and do as a prophet from Allah, the Almighty, should act and do. And his character was so ideal that he

had no equal even before receiving revelation from the Heavens to the extent that people of Makkah nicknamed him, ‘the trustworthy’. ‘Ismah was manifested in various ways.

For example, the miraculousness of the Quran—his message was an indicator of ‘Ismah. The clear challenge presented by its inimitability became the miracle which indicated that he

receives revelation from Allah and thus he

was not going to misrepresent His message or change it. At the same time, the Quran repeatedly stated that Muhammad is honest and truthful in conveying what Allah wanted him to deliver without any addition, decrease or change. Furthermore, some of the incidents which he

had received revelation about that he had to recite to and explain to the believers and thus all people to the end of time, were dealing with personal affairs, challenging others and provoking them, giving prophecies about the near future as well as others that he might have wanted not to deal with openly. But he did convey the message as he received it regardless what the content was. These incidents, when learned in detail, clearly show that Allah was monitoring what happens to the Prophet

and what he did.

Fifth: Unfeasibility of implementing the Quran

All Muslims know that without the Sunnah no one can worship Allah properly. And that all claims to ignore the Sunnah and rely solely on the Quran for being Muslims are misguided innovations because they disregard tens of Quranic instructions that direct Muslims to follow and obey the Sunnah. What is important to note here is that the Quran by itself is not enough to worship Allah as He desires us to do. Because as stated by many prominent scholars of Islam, “the Quran is in need of the Sunnah but the Sunnah is not in need of the Quran.”

This should be simple to appreciate if one thinks about the acts of worship Allah has made obligatory upon all Muslims. Consider the Prayer for example: would anyone be able to perform the Prayer relying on the Quran alone? Not really. The same applies to the rest of Allah's orders.

The Quran makes requirements of the Muslims then the Sunnah shows them how. This is Allah's plan which made the Sunnah part of His revelation and a complement to the Quran. This is how much authority the Sunnah has in Islam. Without it there can be no Islam or Muslims.