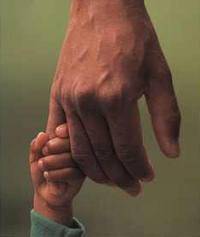 Importance of a role model in building morals:

Dear person who assumes the upbringing process, Anas ibn Maalik, may Allah be pleased with him, who lived with the best role model in terms of morality, narrated how he had experienced this in the character of the beloved Prophet

Anas, may Allah be pleased with him, said,

was the best of all people in terms of morals. I had a brother called Abu ‘Umayr, who, I think, had been newly weaned. Whenever the Prophet

came, he used to say to him: ‘O Abu ‘Umayr! What did An-Nughayr (nightingale small bird) do?’ My brother was playing with this small bird. It happened that the time of prayer was due while the Prophet

was in our home, and he would order for the mat he was sitting on to be swept and cleaned, then he would lead us in prayer.” [Al-Bukhari]

• "I served him for nine years; by Allah, he never said to me about a thing which I had done why I did that or about a thing that I had left as to why I had not done that." [Muslim]

• "The Messenger of Allah

had the best disposition among people. He sent me on an errand one day, and I said, 'By Allah, I will not go.' I had, however, this idea in my mind that I would do as the Messenger of Allah

had commanded me. I went out until I happened to come across children who were playing in the street. Then, the Messenger of Allah

came there and he caught me by the back of my neck from behind me. As I looked at him I found him laughing, and he said: 'O Unays, did you go where I commanded you to go?' I said, 'O Messenger of Allah, yes, I am going.'" [Muslim]

and take him wherever she desired (to fulfill a need for her)." [Muslim]

Dear parent, and anyone who assumes the responsibility of the upbringing process, here is a set of the most important morals that we must implant in our children:

However, there is an important question left: What is the best way to instill morality in the child? And, how should we hold our children accountable or reward them for it?

“Religious morals will not be instilled in the soul except when the person gets used to all good habits, leaves all bad acts, regularly practices and enjoys doing good acts, and hates and feels pain concerning bad acts. Good morals are acquired by getting accustomed to good acts and watching and accompanying those who do good acts – those people are the companions of goodness and the brothers of righteousness.

Dispositions copy from each other, and good and evil are equal in this respect. Children are, in principle, disciplined by keeping them away from evil friends. Every human being is born with a sound innate disposition, and his morals are refined by regular observation and upbringing. The boy should be honored and rewarded with something that he loves and be praised in front of people whenever he shows good manners and does a commendable act. If he violates the proper conduct once, he should be overlooked; if he repeats it, he should be blamed secretly without over-reprimanding him every now and then. This actually makes blame insignificant in his heart. It is preferable that the father maintains his solemnity above blaming him, whereas the mother intimidates him by the father.”

Finally, a gradual approach in upbringing, training and guidance is necessary for the child to acquire a quality or a skill and to implant a belief or a manner. Moral qualities and doctrinal principles resemble physical skills in as much that they need to be acquired gradually and practiced repeatedly. By doing so, man acquires, masters and performs them easily without much effort or difficulty.

It is like the man who learns to drive a car or play some kind of sport; he learns it step by step, and by repeating it, it becomes easy after it had been difficult and arduous. Frequent repetition helps the person to master and perform it perfectly and efficiently with ease in its performance and with minimal effort. Acquisition of morality is like sport that needs striving to force oneself to the work that a certain manner requires. A man who wants to acquire the manner of generosity and giving, has to oblige himself to give away, particularly money, to others. When a person continually forces himself to give even against his will and he finds it difficult, his soul will become used to giving and will do it easily. With the passage of time and repetition, giving becomes a quality in the person, and he will be generous.