Our Children and Prayer - I 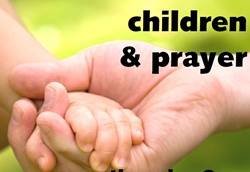 • “My son does not pray except because he fears me.”
• “If I did not remind him of the prayer time, he would wait until its due time had passed.”
• “My son only prays to silence my yells. Can you imagine that he does not even perform ablution before praying?”

Dear parent, if you are among this group, I would like to invite you, from the depth my heart, to contemplate my words; perhaps you could find guidance in what I have compiled from the opinions of experts in the field of education and parenting to make full use of it in laying the optimal and best foundation in your precious child [i.e,. your beloved son] of which you are dreaming.

Before we start our journey on that road and go through the details, we should adopt the following narration as our motto in the process of teaching our children to perform prayers; the Prophet

said: ~"Command your children to pray at the age of seven and beat them for it at the age of ten (if they do not pray)."~~ [Al-Albaani: Saheeh]

Why the age of seven in particular?

In fact, there are several issues that are related to that specific age. At that age, the children’s mental horizons broaden and they are willing to learn essential life skills. Moreover, seven-year-old children are more eager to seek their parents’ pleasure; since they are full of deep admiration for their parents in this phase of their lives. In fact, children then are willing to do whatever they are told, to get in return simple words of praise or encouragement. Furthermore, children at that age tend to imitate adults in their various actions and behavior; they are rather keen to go to the mosque and pray, unlike the eleven-year-old son and older children who believe that implementing their father's commands is a return to the childhood phase. Therefore, children try to keep away from implementing their orders at the age of puberty. In fact, children at that age believe that their rejection to their father’s orders is the utmost level of attaining the phase of youth and being a grown-up.

Let us overcome the obstacles of teaching together.

• Failing to understand the meaning of the word “obligatory” i.e., when your child is informed that performing prayer is obligatory; since such abstract words are rather hard for children to comprehend at that age as they have simpler understanding abilities at that time. Hence, you should resort to using intelligible and simple language; for example, you may tell him, "Prayer is obligatory; this means that we can not neglect it and as soon as we hear the Athaan (call to prayer), we should immediately perform the due prayer”, and so on.
• Lack of innate readiness to pray; the child may pray when he is asked to do so.
• Lack of commitment to perform the five daily prayers at their due times without the supervision of parents.
• Accustoming him to perform Al-Fajr (Dawn) Prayer.
• Accustoming him to perform ablution before each prayer.

Step by step … do not hasten things.

• Purification is the key to performing prayers:

A parent or teacher should first teach the child the significance of prayer, and the fact that it was the last advice of the Prophet

In fact, when the child masters ablution, the father should encourage him by offering him some sort of reward, or a piece of candy as an encouraging gesture so as to urge him to continue. However, if he makes a mistake in performing ablution, the father should not scold or reprimand him, instead he should correct him nicely. In fact, numerous Companions have adopted the same method in teaching the Taabi‘oon (Followers) how to perform ablution correctly. Thus, the virtue of ablution would take root within the child’s heart. The Prophet

said: ~"If the Muslim performs ablution, his sins will get out from his ears, eyes, hands and feet; and as he finishes (i.e. performing ablution) and sits, he will be forgiven."~~ [Al-Albaani: Saheeh]

Hence, the child would learn that whenever he wants to purify himself physically and psychologically, he can perform ablution.

• Teach him through representation:
A parent or a teacher should start teaching his child how to pray after he is taught how to perform ablution. The first stage in this process is for the father to pray before his child duly while observing Khushoo‘ (submission); since the first stage of learning is observation for several times before the child gets used to performing its due movements, if the child has not yet reached the age of distinction. However, when he reaches the age of seven years and is able to comprehend, he should be instructed to perform the prayer with its pillars and acts of Sunnah. Moreover, when the child performs his first obligatory prayer correctly, the parent should offer him a big reward; so that prayer would be associated with reward in his heart, and as he grows older and reaches puberty, he would come to know that the real and big reward in the Hereafter is Paradise.

Moreover, when the child reaches the age of ten, he should be made to perform the prayers regularly, and if he is negligent, he should be reproved, then threatened, then rebuked and reprimanded severely, then the father can hit his child for what he has been negligent of in terms of performing the due acts of worship. In fact, the parent should resort to corporal punishment only after trying all other parenting methods of punishment.
Dear parents, let us instill love for prayer into our children at an early age by allocating a special outfit for prayers for the girl, or allocating a prayer mat for the boy.

Our Children and Prayer - II