Oxidation in the blood 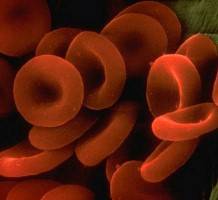 Allah Almighty Says (what means): “No! Rather, what they have earned has rusted up their hearts." [Quran 83:14]

The term ‘rusted’ used to describe hearts in verse of the chapter Al-Mutaffifeen may be a reference to biochemical reaction that takes place in the heart—Allah knows the truth. Rust is the result of iron reacting with oxygen – oxidation.

An excess of iron in the blood can even lead to premature aging in all the body's cells by causing rust-like oxidation. In the disease known as `hemochromatosis,' caused by excess iron accumulating in the body, iron produces toxic effects and causes organs such as the liver to collapse. Since this is the result of iron oxidation, this phenomenon is often described as organs `rusting' or `rust accumulation' in organs. In the journal Science News, Dr. Sharon McDonnell describes the iron oxidation in cells making up organs as `rusting'.

Another reference says this about the disease: "...those with hemochromatosis absorb iron, storing it in their organs. Over time, it accumulates in toxic amounts, causing organs to fail because they literally rust."
It is only possible to identify the reaction of iron with oxygen in the body—oxidation in the blood—in laboratories with highly advanced equipment. The fact that such a comparison, so compatible with the scientific data, appears in the Quran is an evident miracle, given the time when the Quran was revealed. The fact that the Quran also contains countless other pieces of information all in agreement with modern science is another sign that it is the revelation of Omniscient Allah, our Lord and the Creator of all things.

The mother’s womb with its secure protection

Allah Almighty Says (what means): "Did We not create you from a liquid disdained? And We placed it in a firm lodging for a known extent. And We determined [it], and excellent [are We] to determine.” [Quran 77: 20-23]

And, "And certainly did We create man from an extract of clay. Then We placed him as a sperm-drop in a firm lodging. Then We made the sperm-drop into a clinging clot, and We made the clot into a lump [of flesh], and We made [from] the lump, bones, and We covered the bones with flesh; then We developed him into another creation. So blessed is Allah, the best of creators.” [Quran 23: 12-14]

The above verses about the creation of human beings contain fundamental information from the field of embryology. The description of the womb as a "secure receptacle" indicates an important feature that has been better understood through modern science—Allah knows the truth. The process that begins with the zygote, produced by the sperm and egg cells coming together and continues until the emergence of a complete human being, made up of trillions of cells all working in harmony, takes. The word "makeen," translated as `secure' above, also suggests such meanings as `unshakeable, sound, resolute, powerful, fixed and safely put in place.' The word "karaar" also means `location, stability, permanence and place of settlement: These words very wisely describe the womb as a sound and safe location. The mother's womb provides insulation against external agents, light and sound, and particularly protects the baby against shock and pressure.

Located in the pelvic cavity, the womb is well protected by the thick and strong bones that surround' endometrium’ on the inside, helping bear the weight of the embryo until the end of pregnancy. This structure made up of powerful muscles is ideally constructed for the baby's growth and development. During pregnancy, the ligaments attaching the bones in the region together become thicker and longer. These ligaments that attach the top of the womb to the strong pelvic bones make the womb strong and stable.

The embryo also has a source of the heat, water, oxygen and nutrients it needs during the course of its development. The mother's womb undergoes many changes that enhance its strength during pregnancy. Together with the muscles, ligaments and elastic tissues it contains, there is also an increase in the number of blood vessels and nerves. The womb is thus able to increase 20 times in more elasticity. The constant changes in the womb continue even after the embryo has grown into a healthy baby many hundreds of times larger than its initial state. The womb now changes in such a way as to permit the baby to exit in a healthy manner.

During pregnancy, another most miraculous state of affairs regarding the protection of the baby comes about. The baby is also protected against internal threats. When a foreign body enters the body, such as during an organ or bone—arrow transplant, the host's defense system begins reacting, and this can sometimes lead to fatal consequences. But that never happens to the fetus, and the mother's immune system does not regard it as a foreign body. It is extraordinary how the mother's immune system tolerates foreign genes from the father; because the baby is 50 percent foreign body. Marianne van den Heuvel, a scientist from Guelph University, describes this as `fascinating' and continues: `That was always a puzzle from an immunology standpoint because the fetus is actually foreign. It's part of the mother and "It's part of the mother and also part of the father. It should be rejected by the body...,” but, by the will of Allah, no such thing happens, and the womb remains a very safe and secure place.

All the information about embryology provided in the Quran is in full agreement with modern medicine. This information, which has emerged through advanced technology, is one of the clearest proofs that the Quran is the revelation of our Lord, the Creator of all. It is also revealed in the Quran, which is full of information from hundreds of years ago that sheds light on the scientific world of today, that: Allah Almighty Says what means: "And in the creation of yourselves and what He disperses of moving creatures are signs for people who are certain [in faith]." [Quran 45:04]