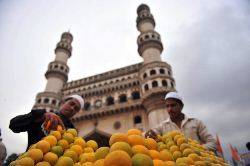 Working with Food During Ramadan

Fasting Ramadan involves great endurance and patience. For some, the greatest trial is enduring hunger. For others it is battling exhaustion. Still others find their test is controlling a short temper.

For me, the greatest tests include all the above plus the thirst that ensues approximately three hours after I begin my fast. Despite the thirst, I like keeping myself busy during the day because it keeps my mind off the hunger pangs and my dry throat. But what about those Muslims who work all day selling food?

They don't have a choice because their livelihood is directly tied to the sale of food and beverages. For many of them, the trial through the next several years will be increasingly taxing since the fasting days are getting longer as Ramadan migrates back through the solar year. How will they manage to get through a day in Ramadan?

What's in a Sandwich: The Halaal Cart

There used to be a time when hot dog carts ruled the streets as the main sources of cheap, tasty lunches. Over the past few years, food carts selling cooked gyros and sandwiches with "halaal' meat have taken over this title.

In New York City, the number of vendors from Muslim countries (i.e., Egypt, Bangladesh, and Afghanistan) has increased from 69 to 563 in the last 20 years, according to the New York Times article "Decline of the Dog," July 29, 2007.

There are multiple carts scattered every few blocks. Each cart often has a line of people ordering various dishes, including lamb gyros, chicken and rice, and Philly Steak sandwiches. The food, with its various accompanying sauces, is extremely tasty, cooked on site, and inexpensive: One full meal costs from 3 to 6.

The combination of these three qualities makes the carts appealing to Muslims and non-Muslims alike. For Muslims who endeavor to have meat from only halaal slaughter, the carts are an added bonus. It is not uncommon to see carts with signs of Bismillaah or audios of Quran recitations, especially during Ramadan.

However, Ramadan is like any other month for the cart vendors because their customers include people who don't observe Ramadan. They have to fast while they grill chicken and lamb and prepare pitas and sauces to serve to these customers.

I asked two vendors how they managed to fast in Ramadan. Both men were Pushtuns, immigrants from the mountainous regions of Pakistan and Afghanistan. It seemed a feat to me to prepare fresh, hot food for customers while abstaining from food and drink. But the two vendors simply shrugged their shoulders and said it was because they were from mountainous regions often subject to extreme weather. They were used to fasting in adverse conditions.

On a deeper level though, the steadfastness and the patience exhibited by these two men didn't simply reflect their culture or ethnicity. It was more of a reflection of an faith deep-rooted in Allah's mercy, devoid of complaint. Allah Says (what means): "But none is granted it except those who are patient, and none is granted it except one having a great portion [of good]." [Quran 41:35]

Another assertion by the halaal vendors I met was that they were used to fasting for long hours in adverse conditions because they were encouraged to fast since they were young. Allah Almighty has shown children mercy, as He Almighty has not ordained fasting for them until they reach puberty.

Yet there have been so many times that I have seen parents excusing their adolescents from fasting because of exams or some sporting competition. But there was no such excuse for the Pashtun vendors when they were children. Rain or shine, they were told to fast whether they liked it or not. The short term must have been difficult, but the long-term result of their endeavors has resulted in their earning income in this world and the next.

On a cool early morning, when the sky is still dark, Sardar and Naseem Khan set out at 4:30 am on a morning of Ramadan. They first stop off at a Muslim-owned restaurant in their neighborhood and partake of Suhoor (pre-dawn meal).

When they finish their meal and start their fast, they're on their way to collect fresh fruit from wholesale vendors and head to a street corner in the city to begin their long, busy day. Once they set up their cart full of bananas, apples, oranges, berries, grapes, and mangos (to name a few of the variety of fruits seen on their carts) it is close to 7 in the morning. By that time, people are emerging in large numbers on their way to work and they are eager to spend a quarter on a banana, or a dollar on some apples, or two dollars for a pound of grapes.

As lunchtime starts around 11 a.m., their cart is once again inundated with people looking for fruit to go with their lunch. The rush never really ends, as there is somebody constantly at the cart looking to do business. The two brothers can sit little, as they are required to deal with customers while standing.

In addition, they have little shade to protect them from the hot sun. They continue to fast. Their story is the story of hundreds of fruit vendors in New York City, many of them Muslim. Ramadan is no exception to their schedule because like the halaal cart vendors, they do business with customers who do not observe Ramadan.

It is not the hunger which bothers the Khan brothers. It is the thirst that is most trying. Their physical exertion involves standing for long periods at a time and conversing with customers and people who stop by for a chat. They cannot have a glass of water or juice.

Yet they carry on so they can support themselves and their families in an Islamically acceptable manner. Again, there is no whining or apprehension at the thought of fasting another day.

The vendors profiled here are examples of fortitude and patience which blooms from their faith in Allah Almighty. They are not angels. They are human and their fast is trying for them. They are simple men with simple, but powerful lessons: To get through such a difficult day while abstaining from food and drink, they derive their strength only from Allah Almighty.

As Mr. Khan said to me: "Allah helps you. Allah gives you strength."