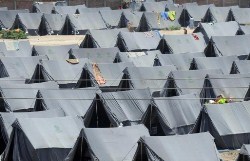 Helping and supporting those in distress is a trait that is encouraged by Islam and a noble characteristic that is an implication of sincere brotherhood and chivalry. The life and manners of the Prophet

present the finest example for every aspect of our life, especially in helping and supporting those in need or distress. The Prophet

was known for this noble characteristic, even before receiving the divine message. When he received the revelation for the first time he went back to Khadeejah, may Allah be pleased with her, and told her about what had happened to him, he added: “I feared that something might happen to me.” Khadeejah, may Allah be pleased with her, said, “Never! By Allah, Allah will never fail you as you maintain the ties of kinship, speak the truth, help the poor and the destitute, serve your guests generously, and assist deserving, calamity-afflicted people.”

Thus Khadeejah, may Allah be pleased with her, deduced that Allah would protect the Prophet

because of his good deeds, including his keenness to help the distressed, as, after all, a person reaps what he sows.

In Islam, relieving others of their distress is considered a duty for those who can do so and a good deed towards which people should race. The Prophet

said: “Allah helps whoever helps his brother.”` His words have become an axiom for Muslims.

commanded Muslims to assist those in need and distress. When he forbade his Companions from sitting on roads unless they observed the rights of the road, he explained that these rights included helping those in distress and guiding the lost: Imaam Ahmad

narrated on the authority of Al-Baraa’ ibn ‘Aazib, may Allah be pleased with him, that the Prophet

passed by some people while they were sitting on the road and said to them: “If you have to sit there then guide the lost, return greetings and support the oppressed.”

Helping those in distress is a rewardable charity. In a Hadeeth on the authority of Abu Moosa Al-Ash‘ari, may Allah be pleased with him, the Prophet

said: “Giving charity is an obligation upon every Muslim.” He was asked, “O Messenger of Allah, what about the one who does not find something to give?”' He

said: “Let him work with his hands and give in charity.” He was asked, “What if he still does not find anything to give?” He

replied: “Then let him assist those in need and in distress…”

A person who asks for help may be oppressed, helpless or distressed, and in all cases helping him and fulfilling his need is relief for his suffering. In return, Allah The Almighty promises to relieve the distress of those who relieve others on the Day of Resurrection. The Prophet

I‘tikaaf, or ritual seclusion in the mosque, is a great act of worship and its reward is also great as a Muslim leaves everything behind for it and dedicates himself to worshipping Allah The Almighty. However, the reward of the person who fulfills the need of others is greater than the one who performs I’tikaaf. In this regard, the Prophet

said: “It is better for the one who moves to fulfill his brother’s need to do so than to make I’tikaaf for ten years.”

Al-Hasan, may Allah be pleased with him, once ordered Thaabit Al-Bunaani

to go and fulfill the need of a certain man. Thaabit

said, “But I am in the state of I’tikaaf.” Al-Hasan, may Allah be pleased with him, said to him, “O foolish man! Do you not know that fulfilling the need of your brother is better for you than making I’tikaaf?”

Helping those in distress and fulfilling people’s needs indicates strong faith and sincere brotherhood. The chivalrous and magnanimous cannot endure seeing anyone in distress, and without any hesitation or delay they hurry to assist the distressed, voluntarily seeking the reward of Allah The Almighty. Moosa (Moses), may Allah exalt his mention, the magnanimous and noble prophet of Allah, escaped from the oppression of Pharaoh. He was tired and exhausted when he reached the well of Madyan, and there he found a crowd of men watering their flocks. He also found two women there who were waiting for the men to finish so that they could water their flocks too. Once he knew their need, he did not wait for them to ask him for help, rather he took the initiative and watered them for them. Allah The Almighty Says (what means): {And when he came to the well of Madyan, he found there a crowd of people watering [their flocks], and he found aside from them two women driving back [their flocks]. He said, “What is your circumstance?” They said, “We do not water until the shepherds dispatch [their flocks]; and our father is an old man.” So he watered [their flocks] for them; then he went back to the shade and said, “My Lord, indeed I am, for whatever good You would send down to me, in need.”} [Quran 28:23, 24]

This is the attitude of the chivalrous - they never hesitate when it comes to helping others and relieving the distressed.

We seek refuge with Allah The Almighty against the cessation of His blessings, and may His blessings and peace be upon His Messenger

his family, his Companions and those who follow him.