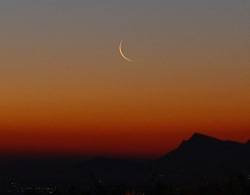 Allah The Almighty is aware of the great progress of astronomy in the future. However, He did not consider it crucial in confirming the causes of acts of worship. Allah The Almighty revealed this to the Prophet

and so he said: "We are an unlettered nation, we neither write nor know calculations. The month is like this and this (pointing with his hands; sometimes of 29 days and sometimes of 30 days)."

This is clear proof that using astronomical calculations in confirming the crescents is rejected under Sharee’ah. The Hadeeth commands us to sight the crescent, as if we are unlettered and have no ability to write, read or know the astronomical calculations. This, however, does not mean belittling or disdaining the value of astronomy. Rather, astronomers can play a great role in many areas of life. However, they should stay away from religious issues, because they are not allowed to play any role in confirming the causes and reasons of the acts of worship. Allah The Almighty has made the rulings contingent on tangible causes and reasons.

The scholars of Fiqh unanimously agreed that the Sharee’ah-approved cause for confirming the beginning of fasting is sighting the crescent and that using astronomical calculations in this regard is rejected, whether the sky is clear or cloudy. Only a group of the late scholars contradicted this consensus and introduced a cause which is not prescribed by Allah The Almighty. Their opinion is meaningless and is nullified by the preceding consensus of the scholars as well as the practical consensus. Muslims during all ages, even when they were advanced in astronomy and establishing astronomical observatories, did not use this in confirming the causes of the Sharee’ah rulings.

Since Islam recognized the judiciary system, it did not happen that a judge gave a ruling according to astronomical calculations. Still judges sight the crescent or wait for trustworthy witnesses to confirm the sighting. In Egypt or example, since the establishment and until its abolishment, the Supreme Sharee’ah Courts there never adopted astronomical calculation in confirming the sighting of the crescent at all. Then Dar Al-Ifta of Egypt (the entity responsible for issuing Islamic rulings) adopted the same approach. It happened lately that some Muftis introduced this religious innovation and rejected the Sharee’ah-cause (sighting the crescent by eyes) and introduced a new cause which is not prescribed by Allah The Almighty (astronomical calculations). By doing so, they contradicted the scientific and practical consensus of the Muslim Ummah since the era of the Prophet

Still we have to be alert to three issues:

First: The lunar month from the astronomers’ view is the period between the gathering of the sun and the moon twice after the disappearance and before the appearance. According to them, this period is (29) days, and (12) hours and (44) minutes.

1 – According to astronomers, the month begins before its beginning is admitted by Sharee’ah, and thus it ends earlier.

2 – According to astronomers, the month is estimated by a fixed unit of time, which is different from the duration admitted by Sharee’ah, as indicated above.

4 – According to astronomers, there is no difference when the gathering of the sun and the moon occurs during the day or night. When there is a gathering and separation (of the sun and the moon) even shortly before dawn, the day starts immediately after dawn. When it occurs during the daytime, the day begins immediately a moment later. The Sharee’ah, however, considers sighting at sunset. When the moon is seen during the daytime, after midday, it is for the next night and that day must not be fasted. Scholars unanimously agree on this.

Second: There must be a differentiation between two distinct matters: one, the acceptable difference in opinions among scholars of Fiqh regarding the issue of difference in sightings (i.e., whether sighting it in one country suffices, or that each country must sight it in order to start fasting), and second, the impermissibility of depending on astronomical calculations in confirming the beginning and end of the month. In the second case, difference is unacceptable because it contradicts the relevant consensus. Although scholars differ regarding the issue of difference in sightings, they unanimously agree that the sole means to determine the beginning and end of the month is the Sharee’ah-approved sighting, not astronomical calculations. Some people mix between the two matters and quote words of the scholars regarding the first issue to prove their view regarding the second issue. So, one should be alert in this context.

Third: It is an advice for the one who contradicts the official Mufti in his country if it is proved that he relies on astronomical calculations in confirming the crescent. One should not publicly declare his contradiction. Rather, he should keep this matter hidden and act according to the Sharee’ah-approved sighting. He should not invite others to adopt the same attitude in order to make Muslims avoid dispute and disunity and to block the means that could lead to unfavorable results. This is also not to give the secularists and hypocrites from the enemies of religion an opportunity to cast doubt into people’s hearts regarding their religion and question the sanctity of fasting within the souls of ordinary people. We ask Allah to help us avoid all the evil of the enemies of Islam.

Moon Sighting: Between Sharee’ah and Astronomy - I