O You Who Has Completed Ramadan - I 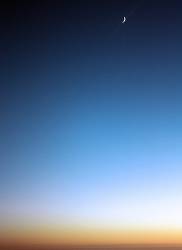 With the conclusion of the blessed month of Ramadan, the Muslims ask Allah The Almighty to accept the righteous deeds they have performed in it and pledge to Him that they will continue the performance of good deeds and remain steadfast upon the path of righteousness. The Muslims also work hard not to break the bond that connects them with Allah The Almighty, and continue to worship Him through all means of good and virtuous deeds, for Allah The Almighty remains our Lord during all the other months as well as Ramadan.

Saying (what means): {And worship your Lord until there comes to you the certainty [i.e. death]} [Quran 15: 99] Thus, we as Muslims should keep reminding ourselves that we should not regress or decrease in the performance of good deeds, and we should beware of being like the woman whom Allah The Almighty mentioned in the Quran, Saying (which means): {…She who untwisted her spun thread after it was strong…} [Quran 16: 92] This represents someone who, after expending time and effort in good, goes on to ruin the end product by undoing it. Thus, we should not ruin our obedience by sinning, nor should we weaken our faith which was increased and strengthened by our acts of worship by committing prohibitions and becoming one of those who are heedless.

One may appear to others to be performing the actions of the dwellers of Paradise until what is preordained comes to pass, which means that he then performs the actions of the inmates of Hell until he enters it; this may happen due to some evil in him which he did not strive to remove from his heart until the time of death comes upon him, suddenly, whilst he is upon disobedience, which means that his end will be an evil one.

Therefore, we must continue to remain firm upon obedience and acts of worship and not change our situation to disobedience after we were upon righteousness; we must continue to maintain the bond of faith which connects us to our Lord. The Companions, may Allah be pleased with them, would closely monitor the conditions of their hearts in order to be assured that deterioration had not occurred; when Allah The Almighty provided some of them with abundant sustenance, they began stating that their hearts had changed, which was a reflection of their continuous fear regarding its condition.

Similarly, we should watch over our actions and lives very carefully, monitoring all that we say and do, checking our intentions. After Ramadan is over, a believer should always maintain himself upon obedience as we were instructed to by the Prophet

who said: “The dearest deeds to Allah are the continuous ones, even if they are few.” It is the hypocrite does not mention Allah The Almighty except very sparingly, and when he does he does it in order to be seen doing so. The believer, on the other hand, mentions Allah The Almighty continuously and with love and sincerity. Whenever the Prophet

would begin performing any act of worship, he would continue performing it regularly; just compare this to the hypocrite who hardly ever acts righteously, and when he does, he will thereafter abandon it for a long period; he is just as Allah The Almighty describes him, in His Saying (which means): {…Showing [themselves to] the people and not remembering Allah except a little.} [Quran 4: 142]

The great fruits of being continuous in performing acts of worship include:

• Causing the heart to become continuously connected to Allah The Almighty, which is what grants steadfastness and strength in faith to the slave; Allah The Almighty Says (what means): {And whoever relies upon Allah — then He is sufficient for him.} [Quran 65: 3]

• Instilling the love of Allah in the slave, as Allah The Almighty Says (what means): {…Indeed, Allah loves those who are constantly repentant and loves those who purify themselves.} [Quran 2:222] This means that Allah loves those who continuously repent from their sins and purify themselves from sinning. Allah The Almighty also Says in a Qudsi narration: “My servant continues to draw closer to Me through voluntary deeds until I love him.” This continuation and persistence is a reason why the slave receives rescue during hardships.