Al-Multazam: Its Location and Supplication at It - II 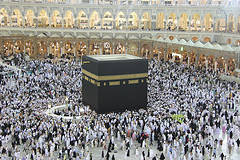 D. The fourth opinion is that it is permissible to embrace every part of the Ka’bah. This opinion, though not well-known, is supported by the authentic Sunnah and it indicates that the actions of the Companions, may Allah be pleased with them, were not with the intention of specifying a certain place, but it was according to what was easy for them or what was known among them.

did this inside the Ka'bah, there is apparently no difference between doing this inside or outside it. Perhaps this is the reason for what the Companions, may Allah be pleased with them, did. Allah knows best.

3.   Supplications are answered at Al-Multazam

also said, "If someone wanted to stand by Al-Multazam, between the Black Stone and the door of the Ka'bah, place his chest, face, arms and palms against it, and invoke Allah The Almighty, he may do so. It is permissible to do so before performing the Farewell Tawaaf as this can be performed during the Farewell Tawaaf or at any other time. The Companions, may Allah be pleased with them, used to do this upon entering Makkah. One may say the supplication that was said by Ibn ‘Abbaas, may Allah be pleased with him, ‘O Allah! I am your slave, son of your slave, son of your maid slave. You enabled me to mount what You subjected to my service of Your creation. You protected me in this land of Yours, until You, by Your grace, brought me to Your House. You helped me perform the rites of Hajj. O Allah! If You are pleased with me, increase Your pleasure with me. Otherwise, grant me Your pleasure before I depart from Your House. O Allah, now is the time for me to depart, by Your leave, without changing (my attitude) toward You and Your House, nor turning away from You or Your House. O Allah, grant me health in my body, infallibility in my religion, bless my return, and help me to obey You as long as I live, and combine for me the good of this world and the Hereafter. You are over all things competent.’

If one stood by the door and invoked Allah without embracing the Ka'bah, this would be alright.” [Majmoo‘ Al-Fataawa]