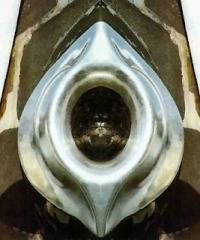 The incident of the Qaraamitah was not the sole incident in this regard. There were several incidents before and after Islam involving the Black Stone, leaving the marks of cracks or breaking in it. The Sacred House, the Ka'bah, witnessed two fires. The first one was during the rule of the Quraysh before Islam and the Black Stone was burnt and its blackness became more intense. The second fire was during the era of ‘Abdullaah ibn Az-Zubayr, may Allah be pleased with him, when he was under siege laid by Al-Husayn ibn Numayr Al-Kindi. The Ka'bah and the Black Stone were burnt. The Black Stone was broken into three fragments until Ibn Az-Zubayr, may Allah be pleased with him, bonded it together with silver. He was the first person to tie the Rukn.

During the era of Haaroon Ar-Rasheed, the silver on the Stone became thin and moved away from its place. The people were afraid that the Rukn would collapse. When Haaroon Ar-Rasheed performed ‘Umrah (minor pilgrimage) in 188 A.H., he ordered the restoration of the Black Stone. The stones surrounding the Black Stone were drilled with diamonds and then silver was poured into them.

Ibn Fahd Al-Makki mentioned in the incidents of 363 A.H. in his book It-Haaf al-Wara bi-Akhbaari Ummul-Qura the story of the Byzantine Roman man who was promised a tremendous amount of money in return for removing the Black Stone. He dealt a violent strike to the Stone with a pickaxe, then as he was about to strike it again a Yemeni man who was making Tawaaf attacked him with a dagger and stabbed him to death.

Ibn Fahd mentioned another incident concerning the Black Stone in 413 AH. The ‘Ubaydi ruler in Egypt enticed ten warriors to remove the Stone. They were under the leadership of a tall man with an impressive physique carrying an unsheathed sword in one hand and a pickax in the other. After the end of Friday prayer on the first day of Nahr (the 12th of Thul-Hijjah) before the pilgrims return from Mina, the tall man headed for the Stone as if he wanted to touch and kiss it but instead he struck it three consecutive times with the pickax. He kept saying, “Until when will the Black Stone be worshipped? Neither Muhammad nor ‘Ali can stop me. I want to demolish this House and remove it today.” There were ten warriors supporting him at the gates of the mosque. A man sought the reward of Allah The Almighty and stabbed him. People encircled that warrior, killed him, cut him and burnt him. The Black Stone remained for two days in this state. It was cracked in the middle of its surface and had some cracks on the right and left. The strikes caused some chips the size of nails to fall down. The broken pieces were dark yellow in color. Some people from Banu Shaybah collected the fallen fragments and mixed them with musk and red dye to fill the cracks.

said, “In 990 A.H. an Iraqi man, who was mentally unstable, struck the Black Stone with a pickax. Emir Naasir Jaawish was there at the Ka'bah so he stabbed the man with a dagger.”

The last incident involving the Black Stone took place in1351 A.H. It was related by Shaykh Husayn Baa Salaamah

came from his summer resort in At-Taa’if before leaving for Riyadh, and there were some dignitaries with him, to fix this stolen piece in its place using a chemical compound mixed with amber and musk prepared by some specialists.”

The belongings of the Ka'bah and the Holy Mosque in Makkah are kept in the museum of Exhibition of the Two Holy Mosques' Architecture. This museum is located near the Ka'bah drapes factory on the old Jeddah route.

The ancient people of Makkah inclined to call the Black Stone Al-Hajar Al-As‘ad (the Happiest Stone). They disliked describing the sources of their honor in the ancient house with the color black, which they regarded as a bad omen. On the basis of traditional culture, there is an increasing desire to donate by pouring perfumes on the Stone in order to draw nearer to Allah The Almighty by perfuming the stone.

Self-denial and favoring others over oneself are clearly seen before the Stone when some people give way to the old people, especially women, and to the young in order to have a chance to kiss the Stone.
According to a Hadeeth, tears should be shed before the Black Stone, regrets should go away and supplications are answered. Ibn ‘Umar, may Allah be pleased with him, said, “The Prophet

stood before the Black Stone and placed his lips on it for a long time and cried. Then, he turned to ‘Umar ibn Al-Khattaab who was crying as well. The Prophet

It is a place for answering supplication. Ibn ‘Abbaas, may Allah be pleased with him, narrated: "By The One in Whose Hands the soul of Ibn ‘Abbaas is, no Muslim asks Allah The Almighty something at it except that Allah gives it to him.”