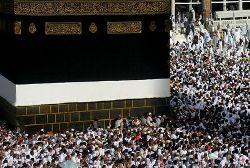 At the heart of the area of Tawaaf (circumambulation), heads and hands crowd around a large, oval, polished silver-framed stone whose color approaches black. People throng together in order to kiss this stone, which is about one and half meters above the ground in the south east corner of the Ka'bah. Muslims believe that this stone will have a tongue and eyes that will testify for the Day of Resurrection for those who kiss it. In a report, the Prophet

said about it: “By Allah, Allah will bring it on the Day of Resurrection having two eyes that it sees with and a tongue to speak with in order to bear witness for those who sincerely touched and kissed it.”

(d. 606 A.H.) said in his Tafseer Al-Quran, “When Aadam (Adam), may Allah exalt his mention, came down to earth, he complained of loneliness. So, Allah The Almighty commanded him to build the Ka'bah and he made Tawaaf around it.”

In his book of history Akhbaar Makkah, Abu Al-Waleed Al-Azraqi (d. 223 A.H.) said, tracing the chain of narrators back to Wahb ibn Munabbih

It is narrated that the Messenger of Allah

said about it, “It was sent down having light. Had it not been for the hands of the polytheists who touched it, it would have healed any ill person who sought it for remedy by the grace of Allah.”

It is narrated that “Allah The Almighty took from the children of Aadam -- from their loins -- their descendants and made them testify concerning themselves, [saying to them], ‘Am I not your Lord?’ They said, ‘Yes, we have testified.’ Then, this was written in a book that was placed in the Black Stone.”

Orientalists claim that the Black Stone is a meteor that fell to earth. Others claim that Islam destroyed the idols of the disbelievers of Quraysh during the conquest of Makkah and later Muslims glorified this Black Stone and other objects. According to the historian, Muhammad Taahir Al-Kurdi, in his book Maqaam Ibraaheem, “The Orientalists’ words are based on conjecture and guessing whereas the Muslims’ belief regarding the Black Stone is based on certain knowledge. The rule says that certitude cannot be abandoned due to doubt. It is worth mentioning that although the Arabs in the pre-Islamic era used to worship stones especially the stone idols in Makkah, no one heard that they worshipped the Black Stone or Maqaam Ibraaheem though they respected them and revered them immensely.” He continued, “We reflected on the secret behind this and its cause and we found that this is because of the protection of Allah. Had these two stones been worshipped besides Allah in the pre-Islamic era and then Islam ordered honoring them by kissing and touching the Black Stone and praying at Al-Maqaam, the hypocrites would have said that Islam approved respecting some idols and that it is not free from ascribing partners with Allah and this would have led people who worshipped them to continue to worship them. Therefore, Allah The Almighty safeguarded these two stones away from the worship of people in the pre-Islamic era.”

Authentic collections of Hadeeth affirm that the Black Stone is one of the rubies of Paradise that was sent down to earth while its color was whiter than snow and milk. Due to the command of Allah The Almighty to His Prophet

the Black Stone was placed in the corner of the Ka'bah. In the Hadeeth, the Black Stone is called the Rukn (Corner). It is inserted in the depth of the Ka'bah building and only its head, which has become black due to the sins of the polytheists, is visible, but the embedded part is white. ‘Abdullaah ibn ‘Amr ibn Al-‘Aas, may Allah be pleased with him, said, “The Black Stone was whiter than milk and its length was like an arm.”

In Seerat Imaam Ahl As-siyar, the historian Ibn Is-Haaq (d. 151 A.H.) said in the story of the construction of the Ka'bah by Ibraaheem, may Allah exalt his mention:

Allah kept the Rukn in the mountain of Abu Qubays when He drowned the earth during the time of Nooh (Noah, may Allah exalt his mention) and said to Jibreel, 'When you see my Khaleel (i.e., intimate friend) build my House, bring this stone out for him.'”