Towards the Ancient House 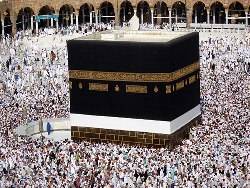 comes from the Republic of Gambia in the far west of Africa. He lived to be over eighty years of age. I visited him before his death in his modest house in his small village near the city of Banjol. He spoke to me about his long journey fifty years ago to the Ancient House (i.e., the Ka'bah) walking with four of his friends from Banjol all the way to Makkah, crossing the continent of Africa from its west to its east. They did not ride on this journey except for very short periods on some riding animals till they reached the Red Sea, and then they boarded the ship to Jeddah harbor.

It was a journey full of wonders and strange occurrences which, if written, would be one of the most exciting and beneficial journey books ever. The journey lasted more than two years. They would settle every now and then in some cities to earn money, have a break and gain the expenses of their journey. Then they would proceed.

I asked him, "Is not performing Hajj to the Sacred House enjoined upon the one who can afford it and you at that time could not afford it?

said, "Yes. But one day, we discussed the story of Ibraaheem (Abraham), the intimate friend of Allah, may Allah exalt his mention, when he went with his family to an uncultivated valley near the Sacred House of Allah. One of us then said, 'We are now strong and healthy youth. Thus, what would be our excuse before Allah The Almighty if we were to neglect proceeding towards His Sacred House, especially when we know that the passage of days will only make us weaker. So why should we delay?' Therefore, he encouraged and urged us to travel while seeking the help of Allah The Exalted."

The five left their houses without having provisions except that which was sufficient for no more than a week. Their main purpose was to fulfill the order of Allah The Almighty of performing Hajj to the Ancient House. They suffered serious hardships, difficulties and calamities which only Allah The Exalted knows. On many nights, they slept so hungry that they were about to perish. On many nights, they were chased by wild animals which destroyed the sweetness of their sleep. On many nights, they were surrounded by fear from all sides as footpads blocked all the ways of the travelers.

narrated, "One night, I was stung during our journey. I was struck by extreme fever and great pain that prevented me from moving and sleeping and I smelt the stench of death running through my veins.

My friends would go to work while I would stay under the shade of a tree till they would return at the end of the day. Satan started to whisper in my heart, 'Would it not have been better for you to have stayed in your country? Why have you charged yourself with what is beyond your capacities? Has not Allah enjoined Hajj only upon those have the capacity' My soul became weaker and I was about to surrender. However, when my friends came, one of them looked at my face and asked me about how I felt. I turned my face and wiped a tear that had overwhelmed me. It is as if he had felt what was going on in my mind! He said, 'Go and perform ablution and then pray. You will not find except that which is good, Allah willing. Allah The Almighty Says (what means): {And seek help through patience and prayer, and indeed, it is difficult except for the humbly submissive [to Allah] who are certain that they will meet their Lord and that they will return to Him.} [Quran 2:45-46]

Thus, I felt comfortable and Allah removed my grief. All perfect praise be to Allah."

Longing to reach the two Holy Mosques was their guide in all their states. It alleviated for them the pain of travelling and the hardship and dangers of the road. Three of them died on the way. The last one died in the middle of the sea. The wonderful thing is that his bequest to his friends was, "If you reach the Sacred Mosque, tell Allah The Almighty about my longing to meet Him and ask Him to gather me and my mother in Paradise with the Prophet

(may Allah exalt his mention)."

said, "When our third friend died, I was struck by extreme sorrow and deep grief. This was the most difficult trial I faced in my journey. He was the strongest and most patient of us. I began to fear that I would die before being blessed with reaching the Sacred Mosque. I would count the days and hours on pins and needles!

When we reached Jeddah, I fell extremely ill and again feared dying before reaching Makkah. Thus, I asked my friend to shroud me in my Ihraam (clothing of ritual consecration) clothes and take me near Makkah or as close to it as possible if I died, in the hope that, perhaps, Allah would multiply my reward and accept me among the righteous.

We stayed in Jeddah for some days and then proceeded to Makkah. My breaths were quick, cheerfulness filled my face and longing overwhelmed and shook my soul when we reached the Sacred Mosque."

kept silent for a while.

wiped his tears and swore by Allah The Almighty that he never experienced a pleasure like the pleasure of seeing the Honorable Ka‘bah! Then he said, "When I saw the Ka‘bah, I prostrated to Allah to thank Him and kept weeping from fear and awe. I wept as children weep. What an honorable House and what a great place! Then, I remembered my friends who could not reach the Sacred Mosque and so I thanked Allah The Exalted for His blessing and favor to me and then asked Allah to record their steps and not to deprive them of the reward and to gather us with them in a seat of honor near a Sovereign who is Perfect in Ability."

I left the house of the Shaykh

while repeating the verse in which Allah The Almighty Says (what means): {And hasten to forgiveness from your Lord and a garden as wide as the heavens and earth, prepared for the righteous.} [Quran 3:133]

This is serious endeavor to obedience that is not prone to laziness or procrastination; an endeavor where pain and grief have little value and where all obstacles and impediments tumble. It is an endeavor with sincere determination and high mettle springing from a heart that is attached to Allah and complying with His orders.

I left the Shaykh's house while repeating the verse in which Allah The Almighty Says (what means): {And proclaim to the people the Hajj [pilgrimage]; they will come to you on foot and on every lean camel; they will come from every distant pass.} [Quran 22:27]

Then I reflected upon the state of many Muslims nowadays who meet all the Sharee‘ah-related pre-requisites for performing Hajj to the Sacred House of Allah and yet procrastinate. Let them remember the Hadeeth in which the Prophet

said: “Whoever wants to go for Hajj, let him hasten to do it, because he may fall ill, lose his riding animal or an excuse may arise to prevent him.” [Ahmad, Ibn Maajah] [Al-Albaani: Hasan (Sound)]