Our Children and the Battle of the Supermarket - I 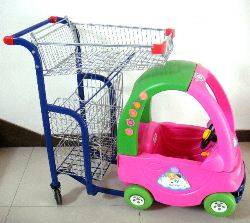 Every time four-year-old Khaalid goes to the supermarket with his mother, he asks for a box of candy, and his mother refuses right away. However, a few minutes later, he starts insisting on buying candy, and the mother persists in her refusal, saying to him, "No." At the mother's refusal of the child's request for the third time, Khaalid becomes furious, and his request takes on the form of an order, but the mother continues to refuse. On that Khaalid's face turns red, he stamps his feet and shakes the shopping cart. The mother threatens to punish him if he does not stop, but he does not give in. Upon asking for candy for the fifth time and the mother's refusal, Khaalid bursts into anger. The mother looks for a place to hide but she finds herself in the ice-cream section, while he is weeping, shouting, kicking and striking everything around him. Everybody is staring at them, and the mother cannot take it anymore, so she submits to his will and buys him a box of candy.

Both mother and child learn from each other:

From a father who is firm in all situations with his child, the child learns, from each situation, that his father is firm and does not accept half-solutions, and thus, he will deal with him on that basis.

From a father who is lax in all situations with his child, the child learns, from each situation, that his father is lax, and even if he grows angry once, with the first tear that flows down the child's cheek, he will forget everything and forgive all mistakes, and thus, the child will deal with his father on that basis.

When you reflect on the example of Khaalid and his mother, which is almost typical in our society, you find that both the mother and the child learned from each other.

What did the mother teach her child? At first, she was persistent that she would not buy candy. However, after a lot of nagging from Khaalid, she submitted and responded to his request. But (unfortunately) the mother does not know that at the very moment that she lost control over her decisiveness, she taught Khaalid a set of rules which will embitter her throughout her life if she does not change her submissive ways.

What did Khaalid's mother teach her child?

• The first rule: The word "No" is of no significance.

The mother's reactions went as follows: No, No, No, No, Yes. What the child learnt here is that when his mother says "No", it does not mean refusal, but it means "Ask again and again, and nag more than once. When your behavior becomes unbearable, I will change my refusal into acceptance." This resembles magic: that refusal turns into acceptance. In this way, the mother taught her child to persist in his negative behavior.

You should know, dear parent, that your children have to know that when you say "No", it means "No" and nothing else. When you say "No" to your children, you indeed want them to stop doing something. The word "No" should not be subject to discussion. However, as a lot of fathers and mothers are susceptible to changing their mind often, the children have learnt to wail, implore and throw a tantrum until they get what they want. When the word is changeable, the child's mind records that, while it is supposed to be placed in the part of the brain that responds without thinking.

According to Dr. Michele Borba, (a pediatrician), parents should not give in if their child resorts to screaming and nagging, or asks for something illogical, or tells you to do something (unacceptable). You should stop the discussion immediately and tell him decisively that by no means would you accept that behavior, and ask him to be polite and set another time for a logical discussion about the demand. When the child realizes that you mean what you say, you will have made a drastic change in behavior.

• The second rule: Good utilization of his moments of anger

Certainly, the mother did not do so intentionally, but this is what actually took place. Khaalid learnt that shouting and nagging give very effective results. If you cry and shout at the top of your voice for a sufficient amount of time, you will have the box of candy. The candy is the prize you get for shouting.

• The third rule: She does not mean what she says

The mother taught her child that she never means what she says. Although she threatens (to punish), she never carries out her threat. She ordered him to keep quiet otherwise she would punish him severely, but what did she do? Instead of punishing him severely, she rewarded him by buying him candy.