Children of Palestine: Beacons for the Ummah 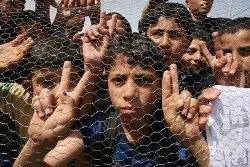 We interviewed some children of the Gazan martyrs to shed light on this group in Palestinian society, which offered the most valuable sacrifice. My interviews with the children who lost their fathers and became orphans made me strongly believe that those orphans are the beacon of light for the Ummah (Muslim nation) in its quest for liberation of the sacred land and purifying it from the impurity of the Zionist Jews, in spite of their social and economic suffering.

Our first interview was with the thirteen-year-old Anas. When he tells you about the moment when his father fell as a martyr six years ago, you feel that he has never forgotten this time even for a moment. He says,
I was still at the first year of the primary school, when one of my relatives called my school and asked my teacher to let me return home as soon as possible because my father had fallen as a martyr. The teacher asked me to return home and sent some of my classmates with me without telling me anything. The school was far away from my house, and when we drew near the house my classmates gathered around me so as not to allow me see my father’s pictures on the walls. When I reached the house, my younger cousin told me that my father had fallen as a martyr in an assassination operation that targeted the field commander of our area. They were together and both of them fell as martyrs immediately. On hearing this, I burst into tears. I started remembering my father who had been chased for many years and who used to bring weapons and bombs to the house and sleep many nights away from us.

When I asked him about his life and the life of his family after the martyrdom of his father, he said, ''My mother completed her university studies and worked as a teacher to provide for me and for my brothers and sisters. She refused to remarry and remained with her children to take care of them. I completed the memorization of the whole Quran after my father’s death within less than two years with the help of my mother.''

When I asked him about the problems that face him, he said, ''We realized that our mother shoulders a heavy burden and solves our problems. However, when she faces a difficult problem, she transfers it to my paternal uncles.''

He finished the interview with confidence and with words that made us feel that all the assassinations carried out by the tanks and fighters of the Zionists will never dissuade us from taking the way of martyrdom. He added, ''I wish I could join my father, and I have memorized the Quran to be a righteous scholar who benefits the Ummah and leads it to safety.''

What is really amazing is that this phrase was repeated frequently during the interview, as if the boy had memorized it. At the end of the interview, we came to know that this was the will and wish of his late father who used to repeat it many times. Therefore, his mother is doing her best to fulfill it.

We interviewed another boy called Muhammad. His countenance told us that his family was suffering. His mother is completely responsible for him and his brothers and sisters, as his father was martyred many years ago at the beginning of the Intifada (The Uprising). She also refused to remarry and dedicated her life to her children for fear of leaving them to the streets in a society that knows nothing but the language of weapons. However, his mother is illiterate and this caused the family to suffer from difficult economic conditions.

Muhammad spoke about the associations that aided them after the martyrdom of his father, saying, 'After the death of my father, they gave us sufficient provisions, but these aids diminished gradually until they became confined to the basic needs. These associations require documents and pictures of me and my brothers and sisters and give us aid that is less in value than these documents and pictures.'

Muhammad wishes to be among those who defend this religion.

It is worth noting that hundreds of the martyrs’ wives suffer in raising their children in a society that does not have a clear law and under a catastrophic economic situation as well as a tight siege imposed upon the Palestinians. Moreover, there is no clear and unpartisan program to protect the children of the martyrs and achieve their aspirations in recognition of the precious sacrifice of their fathers.