Social Evils that are Destroying Muslim Communities - I 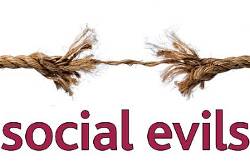 The role of the individual in Islam is not limited to fulfilling the five pillars. The Muslim in an Islamic community has a greater responsibility than is usually understood. All of a Muslim's activities in life are included as acts of worship depending upon the intention underlying them. Nothing is required from a Muslim beyond service to Allah The Almighty, and nothing is accepted from him, which is not a service. Every individual's responsibilities fall into two parts: his responsibility to adhere to the teachings of Islam and his responsibility to enjoin good and forbid evil – which is social reform. There is a reason why enjoining good and forbidding wrong comes first, even before faith. It emphasizes the Muslim's duty and implies faith can only be realized by certain actions, which maintains a relationship between the individual and society.

Neglecting these duties leads to widespread corruption and an increase in evils that consume the core of the community, such as the following:

Indifference: Muslims are commanded to play a positive role in their community and assist in enjoining matters of virtue and preventing evil by as much as they can. Many Muslims stray away from the right path because they do not find anyone to assist them and rescue them from straying in their communities, as those around them act indifferently. One should not underestimate any input he can give in such cases and consider the story of the imprisonment of Imam Ahmad

to see how effective a person can be if he takes the initiative and does not act indifferently. When Imam Ahmad

was imprisoned, a thief was with him in the same cell. The thief said to him, “O Ahmad! I persevere and tolerate the punishment I receive while I am upon falsehood and being punished for a sin. Would someone like you, who is suffering as a result of being upon the truth, not persevere and endure?" Thus, this thief played an important role in comforting and consoling Imam Ahmad

in a difficult situation.

Underestimating the harms of intermixing and neglecting to lower the gaze:

If members of a particular community give free rein to their sight, do not adhere to the Hijab (Islamic attire for women) and women wear perfume before leaving their homes, the most obvious outcome is the spread of immorality in the community. Immoral films, TV programs, obscene content on the internet and intermixing between the two sexes are other causes that have led to people committing sins and indulging in immorality. People nowadays mix with the opposite sex in universities, schools and workplaces, while Yoonus bin ‘Ubayd

said: “Never be in seclusion with a woman, even if you wish to teach her the Quran, and even if only you would be the one reciting."

Being ill-mannered: Many people possess three very evil qualities, namely: lying, cowardice and miserliness, and these are the worst three qualities a person can possess. There are also many other evil qualities that we must be mindful of and hold ourselves to account regarding, such as backbiting, badmouthing others and tale-bearing, while replacing them with praiseworthy qualities and morals.

would rebuke themselves for every word they uttered, words which would be considered very normal to people nowadays. Maalik bin Dhayghan

“Rabaah bin Qays once came asking for my father after the ‘Asr prayer, but he happened to be sleeping, so we informed him of this, to which he remarked: `Who would sleep at this time of the day?` Then he left. We sent a man after him to see if he wanted us to wake my father up for him, but this man did not return until it was time to pray Maghrib. When we asked him why he returned so late, he said: `I followed him to ask him, but found that he was headed to the graveyard while rebuking himself, saying: `What business is it of yours to ask this kind of question? Why do you ask what does not concern you? What is it to you when people go to sleep? People are free to sleep any time they desire, why did you indulge in what does not concern you?...`'”

Note how lightly such a question would be taken in our time, and how strongly he rebuked himself for asking it.