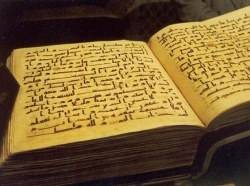 In the cave of Hiraa’ and away from people, Jibreel (Gabriel) came down to our Prophet Muhammad

while he was worshiping Allah The Almighty The One Who Has no partner and said to him: "Recite." Muhammad

said, "I cannot recite,". Jibreel pressed him hard and repeated the order ‘Recite.’ ‘I cannot recite’ said he trembling and terrified, and once again he pressed him hard and said: ‘Recite.’ Again he answered while shaking and trembling ‘I cannot recite.’ Jibreel held him for the third time then released him and said: {Recite in the name of your Lord who created.} [Quran 96: 1]
Then this situation comes to an end and Jibreel disappears. Muhammad hurries back home, trembling and sweating profusely. He enters upon his wife Khadeejah and says to her: Cover me, cover me. [Al-Bukhari] She covers him with wool covers, and wipes the sweat from his forehead.

. Allah The Almighty mentioned some of these books in the Noble Quran and did not mention some others. Allah The Almighty Says (what means): {Mankind was [of] one religion [before their deviation]; then Allah sent the prophets as bringers of good tidings and warners and sent down with them the Scripture in truth to judge between the people concerning that in which they differed. And none differed over the Scripture except those who were given it - after the clear proofs came to them - out of jealous animosity among themselves. And Allah guided those who believed to the truth concerning that over which they had differed.} [Quran 2: 213]

Amongst the books that Allah The Almighty mentioned in the Noble Quran are:

1. The Scriptures of Ibraaheem (Abraham) and Moosa (Moses), may Allah exalt their mention:

It is the book that Allah The Almighty revealed to Moosa (Moses), may Allah exalt his mention, and ordered the prophets who came after him to establish and fulfill its rulings, for Allah The Almighty sent them and did not send any books with them; rather, He made Tawraah their book and religion. Allah The Almighty Says (what means): {Indeed, We sent down the Torah, in which was guidance and light. The prophets who submitted [to Allah ] judged by it for the Jews, as did the rabbis and scholars by that with which they were entrusted of the Scripture of Allah , and they were witnesses thereto.} [Quran 5: 44] Allah The Almighty called he Tawraah “Al-Furqaan” in the Noble Quran.

named Quran because of its similarity to the Noble Quran in their miraculousness. He

said: “The reciting of the Zaboor (i.e. Psalms) was made easy for Daawood. He used to order that his riding animals be saddled, and would finish reciting the Zaboor before they were saddled. And he would never eat except from the earnings of his manual work.” [Al-Bukhari]

Allah The Almighty sent down in Az-Zaboor precious wisdoms and praises of Him. Allah The Almighty did not reveal in it any rulings of the permissible and prohibited actions for they were enjoined to take their rulings from the Tawraah.

• {And We sent, following in their footsteps, Jesus, the son of Mary, confirming that which came before him in the Torah; and We gave him the Gospel, in which was guidance and light and confirming that which preceded it of the Torah as guidance and instruction for the righteous.} [Quran 5: 46]
• {Then We sent following their footsteps Our messengers and followed [them] with Jesus, the son of Mary, and gave him the Gospel} [Quran 57: 27]

The Muslim individual believes that these books were revealed by Allah The Almighty. They called to At-Tawheed (monotheism) and to associating nothing with Him. Allah The Almighty Says (what means): {And We certainly sent into every nation a messenger, [saying], "Worship Allah and avoid Taghut.} [Quran 16: 36]

The Muslim believes that the wisdom behind revealing books is to guide human beings to the straight path of Allah The Almighty, eliminate disagreement and discord from among them, bear for them the glad tidings of the pleasure of Allah The Almighty if they obeyed Him and warn them against His punishment if the disobeyed Him; and that the heavenly books – other than the Noble Quran – have not remained in their original state in which Allah The Almighty sent them down; rather, they were exposed to alteration and distortion and the words of humans have mingled with the Words of Allah The Almighty in them.

Forms of the distortion of the Divinly Revealed Books

Distortion of the divinely revealed books took different forms. The Noble Quran mentioned some of them such as:

Distortion of the Tawraah (Torah)

Belief in the Tawraah that Allah The Almighty revealed to Moosa, may Allah exalt his mention, is one of the main pillars of the religion of Islam. Muslims believe that it included all goodness, called for the worship of Allah Alone and it was a light and guidance. Allah The Almighty Says (what means): {Indeed, We sent down the Torah, in which was guidance and light.} [Quran 5: 44]

However, the Tawraah that was revealed to Moosa, may Allah exalt his mention, does not exist anymore in its original state. The claimed Tawraah of nowadays was written by many writers and in different times. It was distorted and altered.

Amongst the material proofs of its distortion is that the Tawraah that is in the hands of Christians is different from the one that is in the hands of Jews. The Noble Quran recorded that distortion and rebuked the Jews for their distortion and alteration of the Tawraah. Allah The Almighty Says (what means): {Do you covet [the hope, O believers], that they would believe for you while a party of them used to hear the words of Allah and then distort the Torah after they had understood it while they were knowing?} [Quran 2: 75]

although they knew him well. Allah The Almighty Says (what means): {Those to whom We gave the Scripture know him as they know their own sons. But indeed, a party of them conceal the truth while they know [it].} [Quran 2: 146] Though they knew him well, they did not believe in him and were too arrogant to do so. Allah The Almighty Says (what means): {Among the Jews are those who distort words from their [proper] usages.} [Quran 4: 46]

Amongst the evidences that prove the distortion of the current Tawraah are the descriptions mentioned in it which do not befit the Majesty and Perfection of Allah The Almighty such as: And the LORD God said, Behold, the man has become as one of us, to know good and evil.” [Genesis 3: 22] and “And it repented the LORD that he had made man on the earth, and it grieved him at his heart. [Genesis 6: 6].”

Another proof of the distortion of the current Tawraah is what is mentioned in it of describing prophets in a way that negates the infallibility that Allah The Almighty granted them. They mentioned that Ibraaheem (Abraham) is a liar, that Haroon (Aaron) called Banu Israa’eel (Children of Israel) to worship the Calf, and that Sulaymaan (Solomon) worshiped idols to please his wife. Can any human being who has a sound mind say such words; let alone being revealed by Allah The Almighty to guide humans with it?