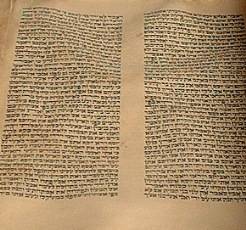 Distortion of the Injeel (Gospel)

The Injeel was also distorted and altered and is not in its original state in which Allah The Almighty revealed it. Christians contintued altering and changing its facts so as to attain their desired worldly gains.

After we have known for certain that those books have been distorted, then what is the meaning that the Noble Quran came to confirm in the divine books that preceded it? This simply means that the Noble Quran came to enhance and support the truth which was mentioned in the books that came before it, mainly worshiping Allah The Almighty Alone, believing in His Messengers, believing in the reward, observing rights and justice, enjoining good and forbidding evil, and adhering to noble moral standards. Allah The Almighty Says (what means): {Say, "O People of the Scripture, you are [standing] on nothing until you uphold [the law of] the Torah, the Gospel, and what has been revealed to you from your Lord."} [Quran 5: 68]

Consequently, the Quran is the only way with which we can know the sound divine teachings. It is the book whose fundamental principles are preserved, its teachings are not distorted, and the Ummah received it from the angel who brings down the Revelation to the Messengers - Jibreel, may Allah exalt his mention - who came down to the Messenger

. This preservation was not granted to any book other than the Noble Quran. In fact, the Quran comprises the most sublime principles, methods and systems. It has all that humans need of beliefs, acts of worship, morals, and transactions. It befits all times and places. It is sufficient to create a Muslim individual, a virtuous family and a righteous society. Truthful is the one who speaks with it. Just is the one who passes judgment according to it. Guided to the right path is the one who adheres to its teachings. Allah The Almighty Says (what means): {There has come to you from Allah a light and a clear Book. By which Allah guides those who pursue His pleasure to the ways of peace and brings them out from darknesses into the light, by His permission, and guides them to a straight path.} [Quran 5: 15-16]

The Previous Divinely Revealed Books Were not Universal

The books that Allah The Almighty revealed, other than the Quran, addressed certain people in certain times and they agreed with the Noble Quran in some rulings and laws. Allah The Almighty Says (what means): {And We ordained for them therein a life for a life, an eye for an eye, a nose for a nose, an ear for an ear, a tooth for a tooth, and for wounds is legal retribution.} [Quran 5: 45]
Muslims believe in what is mentioned in these books as long as it does not contradict with the Quran. They also believe that the Noble Quran is the main constitution for all people.

Characteristics of the Noble Quran

• It supports the truth which was mentioned in these books regarding worshiping Allah The Almighty Alone, believing in His Messengers, believing in reward, observing and establishing rights, enjoining good and forbidding evil, and adhering to noble moral standards. Allah The Almighty Says (what means): {And We have revealed to you, [O Muhammad], the Book in truth, confirming that which preceded it of the Scripture and as a criterion over it. So judge between them by what Allah has revealed and do not follow their inclinations away from what has come to you of the truth. To each of you We prescribed a law and a method.} [Quran 5: 48]

• Allah The Almighty prescribed a law for every nation with its rulings and different interactions that befit its nature and inclinations in the best way. The main pillars of creeds are the same in all messages. Allah The Almighty Says (what means): {He has ordained for you of religion what He enjoined upon Noah and that which We have revealed to you, [O Muhammad], and what We enjoined upon Abraham and Moses and Jesus - to establish the religion and not be divided therein.} [Quran 42: 13]
Then when Islam came, it abrogated all other laws and methods. It established only one creed and method for all people.

• The original versions of the books that were revealed before the Quran were lost. Nothing remained of them except their translations, unlike the Noble Quran which was preserved as a whole with its Soorahs, verses, words, and letters exactly as Jibreel, may Allah exalt his mention, recited it to the Messenger of Allah

(even if he did not write it down himself, for he ordered the writers of the revelation to record every verse immediately after it was revealed to him).

• {And indeed, it is a mighty Book Falsehood cannot approach it from before it or from behind it; [it is] a revelation from a [Lord who is] Wise and Praiseworthy.} [Quran 41: 41-42]

The wisdom behind that is to make the Quran the argument of Allah The Almighty over people. The Quran is for all worlds and all people. It is not for a specific people unlike the previous heavenly books. Allah The Almighty Says (what means): {And We have not sent you except comprehensively to mankind as a bringer of good tidings and a warner.} [Quran 34: 28]

• The Quran is also the miracle of the Messenger

. In fact, if the whole world gathered in order to produce something like what is mentioned in the Quran, they could not produce the like of it for it is as Allah The Almighty Says (what means): {And indeed, it is a mighty Book. Falsehood cannot approach it from before it or from behind it; [it is] a revelation from a [Lord who is] Wise and Praiseworthy.} [Quran 41: 41-42]

• The Quran is an invitation to every good matter and forbids every vice. Allah The Almighty Says (what means): {O mankind, there has come to you instruction from your Lord and healing for what is in the breasts.} [Quran 10: 57]

• The Quran is a cure for souls. It purifies them from their diseases. It is a remedy from disbelief, misguidance, hatred and envy. Allah The Almighty Says (what means): {And We send down of the Quran that which is healing and mercy for the believers, but it does not increase the wrongdoers except in loss.} [Quran 17: 82]