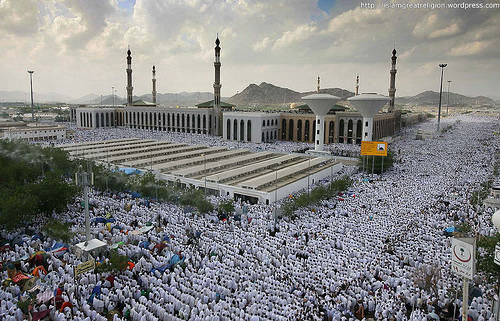 O Muslims, your enemies’ hearts are boiling with hatred! They bite their fingertips at you in rage and envy! Allah Almighty Says (what means):{Neither those who disbelieve from the People of the Scripture nor the polytheists wish that any good should be sent down to you from your Lord. But Allah selects for His mercy whom He wills, and Allah is the possessor of great bounty.} [Quran 2:105] They wish to eliminate religion so that people would follow their passion, ruin would spread everywhere and no religion would be honored, no certitude would be strong and no succession in the land would be established.

How did our violence among ourselves become so severe, and our hope to return to the pure source of goodness become so weak?

Dear loved ones! The One who Has Commanded you to recite Talbiyah so you did, to perform Hajj so you did, and to stand here (on ‘Arafah) so you did, is the same One who Says (what means): {And prepare against them whatever you are able of power and of steeds of war…} [Quran 8:60], and arm yourselves with piety, for whoever wishes to attain wealth without money and honor without a high status and veneration without sovereignty, should fear Allah.

Allah Almighty inevitably humiliates those who disobey Him.

Dear loved ones! Have you forgotten the anger of your Prophet when he vowed that the Jews would not spend one more night in Al-Madeenah, and he fulfilled his vow? Have you forgotten the anger of the calm and gentle Abu Bakr, may Allah Be Pleased with him, when he roared, saying: “I swear by Allah, if they withhold from me a rope which they used to pay to the Messenger of Allah, I would surely fight them for it.”

Have you forgotten the anger of Noor Ad-Deen when Al-Aqsa fell into the hands of the Crusaders. He remained sad, and when he was asked: “Why do you not smile?” He replied: “I am ashamed in front of Allah to smile whilst Al-Aqsa is captured by the enemy!”

Now, O loved ones, when are we going to be moved by the burned copies of the Quran, the destroyed mosques, the violated honor, innocent children trampled on, and tears flowing in Jerusalem, Kashmir, Bosnia and Herzegovina, Eritrea, Somalia and other places?

We need a serious nation in word and deed; a nation which speaks, keeps peace, fights, and takes decisions according to sound knowledge; a nation which is neither frivolous nor heedless. Yahya ibn Mu‘aath, may the Mercy of Allah be upon him, said: