He used to keep himself busy serving his family - II 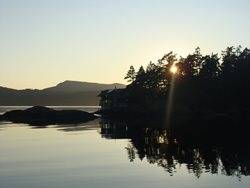 It is narrated on the authority of As-Siddeeqah (‘Aa’ishah), daughter of As-Siddeeq (Abu Bakr), may Allah be pleased with them, the wife of the best of creation, sallAllahu ‘alayhi wa sallam, that she said, describing his conduct in his house, “He used to keep himself busy serving his family.” [Al-Bukhari] “He, sallAllahu ‘alayhi wa sallam, used to sew his garments, stitch his sandals, and do all things that men do in their homes.” [Al-Albaani: Saheeh]

It is narrated on the authority of Al-Aswad

that he said: I asked ‘Aa’ishah, may Allah be pleased with her, about what the Messenger of Allah, sallAllahu ‘alayhi wa sallam, used to do at home, thereupon she said, “He used to keep himself busy serving his family, and once the prayer was due, he would come out for the prayer.” [Al-Bukhari]

It is narrated on the authority of ‘Aa’ishah, may Allah be pleased with her, that she was asked about what the Messenger of Allah, sallAllahu ‘alayhi wa sallam, used to do at home, thereupon she said, “He was a human being like other human beings. he used to take out lice from his garment, milk his sheep and serve himself.” [Al-Albaani: Saheeh]

The Hadeeth (narration) indicates, if not exhorts men to serve their families. The noblest of creation used to sew his garment and stitch his sandals! So, why do you, my brother, not follow his example, sallAllahu ‘alayhi wa sallam, and join your wife in the service of the house, like washing the dishes and other chores, even if not on a regular basis? Whilst doing so, you should remember the statement of ‘Aa’ishah, may Allah be pleased with her, “The Prophet, sallAllahu ‘alayhi wa sallam, used to keep himself busy serving his family.” That, to be sure, has the most impressive effect in increasing the ties of affection and mercy between the spouses.

Although he was the Prophet of Allah, sallAllahu 'alayhi wa sallam, and the head of the Muslim state, he found the time to serve his household. What a great tutor he is!

If you are not doing so already, dear brother, I invite you to start sharing household duties with your wife, and please her, even with a little work in the house. Although she may not let you do so, she will surely appreciate your endeavor and this will increase her respect for you. Rather, she would hasten to do the work instead of you but with great happiness, and the feeling that all her tiredness is gone, after she learns that you appreciate her service in the house. With mere appreciation (of her service) and a little work, your happiness at home will become enduring and your leadership will be secure.

The husband should co-operate with his wife at home through:

1- Personally helping his wife in the responsibilities of the house.

2- Reducing his demands and not blaming the wife for deficiency.

It is not considered good treatment if the husband makes too many demands on his wife in serving him and his household, neither should he take her to task harshly in case she falls short.

Before housework turns into a cause of dispute between the spouses, we suggest imposing the policy of shared agreement, and sitting together to solve the basic problems. What is required now is:

In this atmosphere, each of the spouses should determine the tasks to be done by him/her. The housework may be divided into:

Then, each party is required to show his/her agreement or disagreement on those items. In this way, the responsibilities are determined, and each party is held responsible for the tasks he/she has agreed to do.

In this way, both spouses can care for the feelings of each other, and bring happiness to one another. When a married couple holds a discussion, they should observe the following tips:

1- To be nice and pleasant during the discussion
2- To be calm, first of all, and stay away from belligerent behavior
3- A dead end does not mean that the discussion is over, but that it should be postponed to avoid a clash
4- To make sure to put yourself in the place of the other party.

You may also make a special list for the children of the chores they can do, so that they would learn how to bear their share of the responsibility for doing the housework.

Try to help your wife in some of the housework in order to make her feel that you care about her, and that you appreciate her efforts. Ask her to rest and not do any housework if she is tired, and do that work yourself instead of her. Of a surety, this increases the affection and mercy between you, keeps the river of love flowing, and raises your share in her bank of love.

Your little bit of work at home is like salt in the food. So, share in the housework even if it is just a little, out of appreciation and acknowledgement of the great service your wife does for you, perchance you would spur her to work willingly and relentlessly, and her body and soul will be at your disposal without complaint.