The Soul's Journey after Death -I 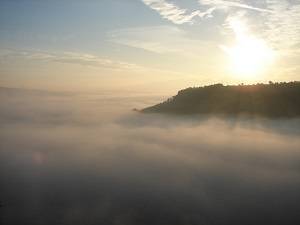 The Soul's Journey after Death Allah, the Most Exalted, Says in the Quran (what means):

When someone dies, the Angel of Death comes to take his soul, no matter where he is. The dying person sees him, hears him, and speaks to him, but not with his eyes, his ears, or his tongue. How then? I do not know exactly. All I do know is that when he begins to move to another world, he sees, hears, and speaks, by some means which, we, the living, do not perceive. Many instances of this have been recorded:

"Ibn Abi Ad-Dunya mentions that on the day 'Umar Ibn 'Abdul 'Azeez died, he said to those with him, 'Sit with me.' When they sat down next to him, he said, 'I am the one you commanded and I failed you. You forbade me and I rebelled.' He said this three times. Then he said, 'But there is no god but Allah.' Then he lifted his head and stared. They said, 'You are looking very intently, O prince of the faithful.' He replied, 'I see a presence which is neither man nor jinn.' Then he died."

Fadhalah Ibn Dinaar said, "I was with Muhammad Ibn Waasi' when he was very near to death. He began to say, 'Welcome, my Lord's angels! There is neither strength nor power except by Allah!' I smelled the sweetest fragrance that I had ever smelled. Then his eyes glazed over and he died."

Why do I need to look so far into the past, to the days of the first Muslims? I myself was present at the moment of someone's death in our own time. I was with my grandmother when she was dying. It was at the time of the Dawn Prayer.

She was in pain and gasping for breath, moaning from the intensity of the pain but in spite of that, she kept repeating with great joy, 'Allah! Death is sweet!' and saying the Shahaadah (testimony) over and over for several minutes. Then it was all over. This is where our job, those of us who are still alive, begins.

After the soul is taken, if it is a pure soul and has relatives in the Next World who are people of the Garden, they come to meet the soul with yearning and great joy. They ask it about the condition of those who are still alive in this world.

The angels then bear the soul from one heaven to the next until it comes into the presence of Allah, glory be to Him and may He be exalted! Then it returns and sees the washing of the body, its shrouding, and the funeral procession. It says either, "Take me forward! Take me forward!" or 'Where are you taking me?' The people there cannot hear this.

When the corpse has been placed in the grave, the soul inserts itself between the body and the shroud so that the questioning can take place. Then the soul hears the receding footfall of the last of the people who followed the funeral and the earth is leveled over him. The earth, however, does not prevent the angels from reaching him. Even if a stone had been hollowed out for him and he had been placed into it and the opening sealed over with lead, it still would not stop the angels from reaching him. These dense substances cannot prevent the passage of souls. They do not even stop the Jinn. Allah Almighty made stone and earth the same for the angels as air is for birds.

The grave expands and stretches for the soul, and as a result for the body as well. The body is in a grave of the narrowest dimensions and yet it expands, because of the soul, as far as the eye can see.

Prophet Muhammad, sallAllahu alayhi wa sallam, said, 'When the believer is about to depart from this world and go forward into the Next World, angels with faces as bright as the sun descend from the heavens and sit around him in throngs stretching as far as the eye can see. Then the Angel of Death comes and sits at his head and says, "Good soul, come out to forgiveness and pleasure from Allah!" Then his soul emerges like a drop of water flows from a water-skin and the angel takes hold of it. When he has grasped it, the other angels do not leave it in his hand even for the twinkling of an eye. They take it and place it in a perfumed shroud and a fragrance issues from it like the sweetest scent of musk found on the face on the earth.

Then they bear it upwards and whenever they take it past a company of angels, they ask, 'Who is this good soul?' and the angels with the soul reply, "So-and-so, the son of so-and-so', using the best names by which people used to call him in this world. They bring him to the lowest heaven and ask for the gate to be opened for him. It is opened for him and angels who are near Allah from each of the heavens accompany him to the subsequent heaven until he reaches to the heaven where Allah, Most Exalted, is. Allah, the Mighty and Majestic, Says, 'Register the book of My slave in I'lliyyoon (in the seventh heaven) and take him back to earth. I created them from it and I return them to it and I will bring them forth from it again.'"

'His soul is then returned to his body and two angels come to him. They make him sit up and say to him, 'Who is your Lord?' He replies, 'My Lord is Allah.' They ask him, 'What is your religion?' He replies, 'My religion is Islam.' They ask him, 'Who is this man who was sent among you?' He replies, 'The Messenger of Allah.' They ask him, 'How did you come to know these things?' He replies, 'I read the Book of Allah, believed it, and declared it to be true.' Then a Voice from on high declares, 'My slave has spoken the truth, so spread out carpets from the Garden for him and open a gate of the Garden for him!' Then some of its fragrance and perfume comes to him, his grave is expanded for him as far as the eye can see, and a man with beautiful garments and a fragrant scent comes to him and says, 'Rejoice in what delights you for this is the day which you were promised.' He asks, 'Who are you? Yours is a face which presages good.' He replies, 'I am your good actions.' Then he says, 'O Lord, let the Last Hour come soon so that I may rejoin my family and my property!'

When an unbeliever is about to depart from this world and go forward into the Next World, angels with black faces descend from the heavens carrying rough hair-cloth and sit around him in throngs stretching as far as the eye can see. Then the Angel of Death comes and sits at his head and says, 'Foul soul, come out to the wrath and anger of Allah.' Then his soul divides up in his body and it is dragged out like a skewer is pulled out of wet wool. Then the angel takes hold of it. When he has grasped it, the other angels do not leave it in his hand even for the twinkling of an eye. They take it and wrap it in the rough hair-cloth and a stench comes out of it like the worst stench of a corpse on the face of the earth.

Then they take it up and whenever they take it past a company of angels, they ask, 'Who is this foul soul?' and the angels with the soul reply, 'So-and-so, the son of so-and-so," using the worst names by which people used to call him in this world. They bring him to the lowest heaven and ask for the gate to be opened for him. It does not get opened.'

The Messenger of Allah, sallAllahu alayhi wa sallam, then recited the verse (which means): "… the gates of Heaven will not be opened for them, nor will they enter Paradise until a camel enters into the eye of a needle [i.e. never].'” [Quran 7: 40]

Then Allah, the Mighty and Majestic, will Say "Register his book in Sijjeen (in the lowest earth)." Then his soul is flung down.

The Prophet then recited the verse (which means): "And he who associates with Allah — it is as though he had fallen from the sky and was snatched by the birds or the wind carried him down into a remote place." [Quran 22: 3]

Then his soul is returned to his body and two angels come and say to him, 'Who is your Lord?' He replies, 'Alas, alas, I do not know!' Then a voice calls from on high, 'My slave has lied, so spread out carpets from the Fire for him and open a gate of the Fire for him!' Then a hot blast from it comes to him, his grave is made so narrow for him that his ribs are pressed together, and a man with a hideous face and clothing and a foul odour comes to him and says, 'Grieve on account of what has brought you disgrace for this is the day which you were promised:' He asks, 'Who are you? Yours is a face which presages evil.' He replies, 'I am your bad actions.' Then he says, 'O Lord, do not let the Last Hour come!'" [Muslim]

Regarding the words used by the two angels who question the dead person in the grave, Allah, the Exalted, Says in the Quran (what means):

"Allah keeps firm those who believe, with the firm word, in worldly life and in the Hereafter. And Allah sends astray the wrongdoers. And Allah does what He wills." [Quran 14:27]