Celebrating Al-Mawlid is a Bid'ah 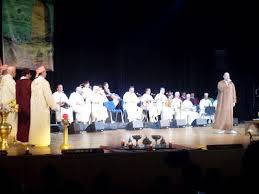 and the prohibitions of introducing innovations into the religion are quite clear. Allah Says (what means):

Follow [O Mankind] what has been revealed to you from your Lord and do not follow other than Him any allies. Little do you remember." [Quran 7: 3]

said: “The most truthful of speech is the Book of Allah and the best of guidance is the guidance of Muhammad, and the most evil of things are those which are newly-invented.” And he

(Al-Mawlid) in the month of Rabee’ Al-Awwal. They celebrate this occasion in various ways:

Some of them simply make it an occasion to gather and read the story of Al-Mawlid, then they present speeches and Qaseedahs (odes) for this occasion.

Some of them make food and sweets etc., and offer them to the people present.

Some people do not limit themselves to the actions mentioned above; they include in these gatherings Haram and reprehensible things, such as free mixing between men and women, dancing and singing, or committing actions of Shirk such as seeking the help of the Prophet

calling upon him, seeking his support against their enemies and so on.

Whatever form it takes and whatever the intentions of those who do this are, there is no doubt whatsoever that it is an invented, Haram innovation which was introduced by the Shee’ah Faatimids after the three best centuries of Islam, in order to corrupt the religion of the Muslims. The next person to do this after them, and reintroduce it was King Al-Muzaffar Abu Sa’eed Kawkaboori, the king of Irbil, at the end of the sixth century or the beginning of the seventh century AH, as was mentioned by the historians such as Ibn Khalkaan

said: ‘The first person to do that in Mosul was Shaykh ‘Umar Ibn Muhammad Al-Malaa, one of the well-known righteous people. Then the ruler of Irbil and others followed his example’.

said in his biography of Abu Sa’eed Kazkaboori: “He used to observe the Mawlid in Rabee’ Al-Awwal and hold a huge celebration on that occasion… some of those who were present at the feast of Al-Muzaffar on some occasions of the Mawlid said that he used to offer in the feast five thousand grilled heads of sheep, ten thousand chickens and one hundred thousand large dishes, and thirty trays of sweets… he would let the Sufis sing from Dhuhr until Fajr, and he himself would dance with them.”

said: “When it is the first of Safar they decorate those domes with various kinds of fancy adornments, and in every dome there sits a group of singers and a group of puppeteers and players of musical instruments, and they do not leave any one of those domes without setting up a group (of performers) there. The people give up work during this period, and they do no work except for going around and watching the entertainment. When there are two days to go until the Mawlid, they bring out a large number of camels, cows and sheep, more than can be described, and they accompany them with all the drums, songs and musical instruments that they have, until they bring them to the square… On the night of the Mawlid there are performances of nasheed after Maghrib in the citadel.”

So, this is the origin of this celebration on the occasion of the Prophet’s birthday. More recently idle entertainment, extravagance, and wasting of money and time have become associated with an innovation for which Allah has not sent down any authority.

It is incumbent upon all Muslims to revive the Sunnah and put an end to Bid’ah (innovation); they should not perform any action until they know the ruling of Allah concerning it.

In conclusion, celebrating the birthday of the Prophet

whatever form it takes, is a reprehensible innovation. The Muslims should put a stop to this and other kinds of Bid’ah, and occupy themselves with reviving and adhering to the Sunnah. They should not be deceived by those who promote and defend this Bid’ah, for these types of people are more interested in keeping innovations alive than in reviving the Sunnah; they may not even care about the Sunnah at all. Whoever is like this, it is not permissible to imitate him or follow his example, even if the majority of people are like this. Rather we should follow the example of those who follow the path of the Sunnah, among the righteous Salaf and their followers, even if they are few. Truth is not measured by the men who speak it; rather men are measured by the truth.

said: hoever among you lives (for a long time) will see many differences. I urge you to follow my Sunnah and the way of the rightly-guided khaleefahs who come after me. Hold on to it firmly. Beware of newly-invented matters, for every innovation is a going astray.” Ahmad and Tirmithi]. So the Prophet

explained to us in this Hadeeth what we should do when there are differences of opinion, just as he explained that everything that goes against his Sunnah, be it words or deeds, is a Bid’ah, and every Bid’ah is a going astray.

whether in the Sunnah or in the way of the rightly-guided khaleefahs, then it is one of the newly-invented matters, one of the Bid’ahs which lead people astray. This principle is what is implied by this Hadeeth and is what is indicated by the Aayah which translates as: "O you who have believed, Obey Allah and obey the Messenger and those in authority among you. And if you disagree over anything, refer it to Allah and the Messenger, if you should believe in Allah and the Last Day. That is the best [way] and best in result." [Quran 4: 59].

means referring to his Sunnah after he has passed away. The Quran and Sunnah are the reference point in cases of dispute. Where in the Quran or Sunnah does it indicate that it is prescribed in Islam to celebrate the Prophet’s birthday? Whoever does that or thinks that it is good must repent to Allah from this and from other kinds of Bid’ah. This is the attitude of the Muslim who is seeking the truth. But whoever is too stubborn and arrogant after proof has been established, then his reckoning will be with his Lord.