A Glimpse of Paradise - I 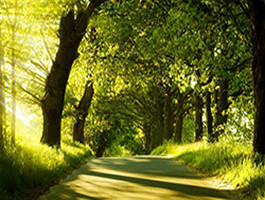 Allah The Almighty has created Paradise for His believing slaves; He has created in it pleasures that no eye has ever seen, no ear has ever heard of, and no mind could ever comprehend. Abu Hurayrah, may Allah be pleased with him, narrated that the Messenger of Allah

said: “Allah, the Exalted, has said: `I have prepared for my righteous slaves (in Paradise) what no eye has seen, no ear has heard, and the mind of no man has conceived.`” [Al-Bukhari and Muslim]

There are many verses in the Quran that describe Paradise and some of what it contains; the following are a collection of some of them:

• It is a wide space:
{“And hasten to forgiveness from your Lord and a garden [i.e. Paradise] as wide as the heavens and earth, prepared for the righteous.”} [Quran, 3: 133]

• Its food and shade are everlasting:
{“The example [i.e. description] of Paradise, which the righteous have been promised, is [that] beneath it rivers flow. Its fruit is lasting, and its shade. That is the consequence for the righteous…”} [Quran, 13: 35]

• Its drinks and foods are delicious and varied:
{“…the description of Paradise, which the righteous are promised, wherein are rivers of water unaltered, rivers of milk the taste of which never changes, rivers of wine delicious to those who drink, and rivers of purified honey, in which they will have from all [kinds of] fruits and forgiveness from their Lord…”} [Quran, 47: 15]

• Its inhabitants are adorned with gold and pearl jewellery:
{“[For them are] gardens of perpetual residence, which they will enter. They will be adorned therein with bracelets of gold and pearls…”} [Quran, 35: 33]

• Its furniture is extremely beautiful from the exterior, and it is lined with silk that is decorated with gold:
{ “[They are] reclining on beds whose linings are of silk brocade and the fruit of the two gardens is hanging low.”} [Quran, 55: 54]

• In Paradise, men are given Hoor, the special women of Paradise, in addition to the wives to whom they were married in this life:
{“And with them will be women limiting [their] glances, with large, [beautiful] eyes, As if they were [delicate] eggs, well protected.”} [Quran, 37: 48-49]

• The people of Paradise will be served by beautiful youths who will never die:
{“There will circulate among them young boys made eternal. When you see them, you would think them [as beautiful as] scattered pearls.”} [Quran, 76: 19]

• Its utensils are made of gold and silver:
{“'Enter Paradise, you and your kinds, delighted.' Circulated among them will be plates and vessels of gold. And therein is whatever the souls desire and [what] delights the eyes, and you will abide therein eternally.”} [Quran, 43: 70-71]

• The climate in Paradise is both moderate and pleasant:
{“[They will be] reclining therein on adorned couches. They will not see therein any [burning] sun or [freezing] cold.”} [Quran, 76: 13]

• The children of the dwellers of Paradise will be raised to their rank, even if they were to fall short of it. This is so that the joy of the dwellers of Paradise will be completed by the presence of their children:
{“And those who believed and whose descendants followed them in faith — We will join with them their descendants, and We will not deprive them of anything of their deeds. Every person, for what he earned, is retained.”} [Quran, 52: 21]

Abu Hurayrah, may Allah be pleased with him, said: “The Messenger of Allah

said: “The first group (of people) to enter Paradise will be shining like the moon on a full-mooned night. Then will come those who follow them, who will be (shining) like the brightest planet in the sky. They (i.e., all the people of Paradise) will not stand in need of urinating, defecating, spitting, or blowing their noses. Their combs will be of gold and their sweat will smell of musk. Their wives will be large-eyed maidens. All the men (in Paradise) will be alike and in the form of their father Aadam - sixty cubits tall.”” [Al-Bukhari and Muslim]