Labbayka Allahumma labbayk (In response to Your call, O Allah here I come) 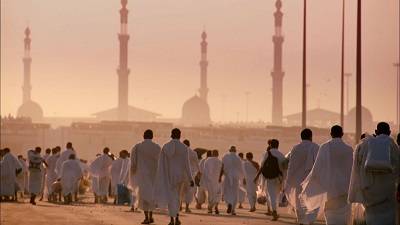 All perfect praise is due to Allah, and may His peace and blessings be upon Muhammad ibn ‘Abdullah, the trustworthy Prophet

his household, his Companions, and those who supported him.

The obligation of Hajj that Allah Almighty has imposed upon His slaves is one of the greatest symbols of Islam. It is one of the noble scenes of the honored and preferred ummah (Islamic community) that Allah Almighty preferred over all other nations. It is one of the sublime scenes of the united ummah that the religion of Islam has combined its different races together in spite of their different tongues and colors. Hundreds of thousands of Muslims from different parts of the globe come together in one place and put on the same clothes of ihram; the clothes of purity and cleanliness. They have a great loud voice, reciting talbiyah (the Hajj-related chant): "Labbayka Allahumma labbayk, Labbayka laa shareeka laka labbayk, Innal hamda wan-ni‘amata laka wal mulk, laa shareeka laka." (In response to Your call, O Allah, here I come. In response to Your call, and I am obedient to Your orders, You Have no partner. In response to Your call. All the praises and blessings belong to You, all the sovereignty belongs to You, and You Have no partners with You.)

It is a great and magnificent scene. It makes the soul travel through the horizons of sublimity and highness. It reminds one of the Messenger of Allah

and the Companions around him when they came to the Ancient House – the Sacred House of Allah Almighty – after Allah Almighty had made them superior and enabled them on earth. However, when the Muslim wakes up from the manifestations of such a great scene, he will see a scene that fills the heart with sadness and grief. That is because he finds his nation at the end of the train of nations. Many nations that do not worship Allah Almighty nor acknowledge His Oneness have achieved progress in the fields of knowledge, technology, and economy. He will also see that non-Muslims have occupied most of the Muslim lands. Look at Palestine, the state of the Aqsa Mosque; Afghanistan; Iraq, the state of the Abbasid Caliphate; Kashmir; the Philippines; and many others. All of them are in the hands of the usurpers and the occupiers such as the Jews, Christians and pagans. They consume their resources, kill their men and young people, humiliate women and children, and rule them with the rulings of devils. The Muslim wonders, searching for an answer to such a terrible situation: Did not the Messenger of Allah

and his Companions use to say, "Labbayka Allahumma labbayk..." and we say it as they used to do? However, faith is not just words, rather, it consists of words and actions. The talbiyah of the ummah, nowadays, even if it is like that of the Messenger of Allah

and his Companions, totally differs from it in reality and meaning. That is because the talbiyah of the present ummah is just composed of words that are put beside each other to, in the end, make a voice like the voice of the real talbiyah. However, it is a hard and lifeless talbiyah. It has no effect in reality. It is the talbiyah of the voice, not the actions. It is a false talbiyah, not a real one. What is then the meaning of the real talbiyah? It means tawheed (Islamic monotheism) that stimulated the hearts and made them go out from the darkness to the light and changed them from tribes of scattered groups to a great ummah. It is as its Lord and Creator and the Creator of all people says (what means): {You are the best nation produced [as an example] for mankind.} [Quran 3: 110]

said regarding the explanation of this verse, “You are the last of seventy nations, you are the best and most honored among them in the sight of Allah Almighty.” [Ahmad, At-Tirmithi and Ibn Majah; Al-Albani: good]

Jabir, may Allah be pleased with him, said, describing the Hajj of the Prophet

Talbiyah is a kind of declaring and manifesting tawheed. It is derived from an Arabic root signifying staying in a particular place. Al-Farra’

said that it means: "I am steadfast in Your worship," and that it is repeated to affirm this meaning.

Talbiyah is a response to the invitation of Allah Almighty to His creatures when He called them to perform the Hajj to His House through His friend, Prophet Ibrahim, may Allah exalt his mention. So it means that we respond to Your invitation, submit to Your wisdom, obey Your command, and will adhere to this. [Majmoo’ Al-Fatawa]
This means: O our Lord, we obey. We will remain steadfast in doing such acts of worship sincerely for You. No one has any share in it. We worship You alone. We do not worship anything other than You, whether it is an angel who is close to You, any Prophet who was sent, any righteous worshiper, or anything else. We do not obey anyone in disobeying You, regardless of whether that be a child, a leader or a prince. We follow Your religion that is mentioned in Your Book or what Your Messenger conveyed to us in his Sunnah. We permit whatever it permitted and prohibit whatever it prohibited. We believe in the truthfulness of what it has come with and the falsehood of whatever goes against it. O our Lord, we follow Your Messenger in belief, acts of worship, transactions, morals, conduct, politics, economy, judgment, and in all other affairs and matters. We cannot replace it. We become allies to his allies and enemies to his enemies. We will firmly adhere to this and will never give it up, even for a blink of an eye. That is because our religion can reform all matters of this world and make the slave win Paradise in the Hereafter. So where can we find the reality of this talbiyah and its effect in the life or the world of the ummah of tawheed in our present time?

The indications and manifestations of shirk have become multiple in the ummah of monotheism, whether it be on the individual or on the social level. Here are the man-made laws (which were made by tyrants, violating and contradicting the Laws of Allah Almighty), becoming deeply-rooted in the Muslim societies. They are used to judge among people in matters of killing, honor, and properties while the Rulings of Allah, the Most High, that are mentioned in His Clear Book or in the Sunnah of His trustworthy Messenger, which have been imposed upon the Muslims because of their faith, have been put aside. Rather, they are neglected until they are completely forsaken. Allah Almighty says (what means) in His Book: {And judge [O Muhammad] between them by what Allah has revealed and do not follow their inclinations and beware of them, lest they tempt you away from some of what Allah has revealed to you.

And if they turn away – then know that Allah only intends to afflict them with some of their [own] sins. And indeed, many among the people are defiantly disobedient. Then is it the judgment of [the time of] ignorance they desire? But who is better than Allah in judgment for a people who are certain [in faith].} [Quran 5: 49-50]

Where can we find the reality of the talbiyah and its effects in turning towards Allah Almighty with fear and hope while we see that the hearts of many groups of people are becoming attached to something other than their Creator? They supplicate it in difficulties and afflictions, seek its help and kindness, and turn towards it in times of ease to thank and praise it.

Where can we find the reality of the talbiyah and its effects in having enmity with the non-Muslims while many of us seek to have friendship with the enemies of Allah Almighty, fearing them, and seeking protection from their evil, or seeking to draw close to them and receive some grants and gifts? Rather, many of the crusades that occupied some of the Muslim countries did not reach them except through the help of the countries of their Muslim brothers.

Where can we find the reality of the talbiyah and its effects on having friendship with the Muslims while a group of scholars in some countries have issued a fatwa for Muslims who work in the armies of the non-Muslims stating the permissibility of fighting their Muslim brothers?

Where can we find the reality of the talbiyah and its effects, like highly regarding the revealed laws and following them, while the main interest of a group of Muslims is to promote the ideas of the enemies to isolate the religion and introduce amendments to its basics and rules under the name of “modernization” so that it may be similar to Christianity, where religion is separated from actual life?

Where can we find the reality of talbiyah and its effects on the conduct of people while we find some people writing books and making forums on the internet to secularize Islam?

Where can we find the reality of the talbiyah and its effects while we see some people dedicating their life to praising the western civilization? This materialistic and hard civilization lacks any effect of religion and is based on racism, enslaving people, occupying their countries, and plundering their resources without any justification except for the tyrannical power that they have and that enable them to do such clear oppression.

Nowadays, the talbiyah, for many of us, lacks its important elements. Letters and words are only what remain of it. It becomes void of its essence and reality, and only a hollow form remains. In spite of this, some of us, while seeing the condition of his ummah and its place among the other worlds, wonder: Why is this so? The answer comes from the Lord of the worlds: {Say, It is from yourselves.} [Quran 3: 165]

Allah Almighty never breaks His promise, as He says (what means): {And Allah had certainly fulfilled His promise to you} [Quran 3: 152]

Allah Almighty has promised us, saying (what means): {Indeed, We will support Our messengers and those who believe during the life of this world and on the Day when the witnesses will stand.} [Quran 40: 51]

Accordingly, whoever seeks victory, glory and enablement has to fulfill their requirements, namely, faith. Faith is composed of words and actions. No benefits can be obtained from words that are not followed by actions. Amongst the actions that are included in faith is to adhere to the saying of Allah Almighty (which means): {And prepare against them whatever you are able of power and of steeds of war.} [Quran 8: 60]

Amongst such matters is that one should make the best use of the means and causes that Allah Almighty made for them to fulfill their effects without relying nor depending upon them. Depending and putting one's trust is only upon Allah Almighty. Some scholars said, “Depending on means and causes is a kind of shirk in tawheed, refusing to accept them as causes and means is a kind of deficiency in the mind, and totally neglecting them is a kind of deficiency in religion.” [Ibn Taymiyyah: Majomoo‘ Fatawa] Allah Almighty, out of His mercy, has made us witness the season of Hajj with its goodness and blessings. It is a great chance for the ummah as a whole and its individuals to achieve the meaning of the talbiyah in themselves, their reality, and their lives. The ummah will not wake up from its deterioration and slips except by achieving the talbiyah in words and actions. O Allah, make us of those who say, 'Labbayka Allahumma labbayk...' faithfully and sincerely in words and actions.
Ameen!

To Witness Benefits for Themselves

That You May Glorify Allah for His Guidance