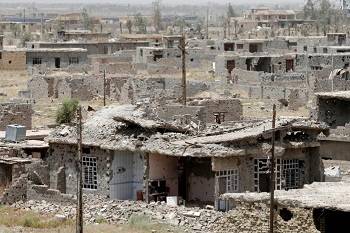 Shia militias in Iraq detained, tortured and abused far more Sunni civilians during the American-backed capture of the town of Fallujah in June than US officials have publicly acknowledged.

The abuses occurred despite US “efforts to restrict” the militias' role in the operation, including threatening to withdraw American air support, according to US and Iraqi officials.

The US efforts had little effect. Shia militias did not pull back from Fallujah, participated in looting there and now vow to defy any American effort to limit their role in coming operations against ISIL.

All told, militia fighters killed at least 66 Sunni males and abused at least 1,500 others fleeing the Fallujah area, according to interviews with more than 20 survivors, tribal leaders, Iraqi politicians and Western diplomats.

They said men were shot, beaten with rubber hoses and in several cases beheaded. Their accounts were supported by a Reuters review of an investigation by local Iraqi authorities and video testimony and photographs of survivors taken immediately after their release.

The battle against ISIL is the latest chapter in the conflict between Iraq's Shia and Sunnis, which was unleashed by the 2003 US-led invasion. The war ended decades of Sunni rule under Saddam Hussein and brought to power a series of governments dominated by Shia parties patronized by Iran.

In public, as reports of the abuses in Fallujah emerged from survivors, Iraqi officials and human rights groups, US officials in Washington initially played down the scope of the problem and did not disclose the failed American effort to rein in the militias.

Brett McGurk, the special US envoy for the American-led campaign against ISIL, expressed concern to reporters at a June 10th White House briefing for reporters about what he called "reports of isolated atrocities" against fleeing Sunnis.

Three days before the briefing, Gov. Sohaib al-Rawi of Anbar Province informed the U.S. ambassador that hundreds of people detained by Shia militias had gone missing around Fallujah.

By the time of the White House briefing, Iraqi officials, human rights investigators and the United Nations had collected evidence of scores of executions, the torture of hundreds of men and teenagers, and the disappearance of more than 700 others.

Nearly three weeks later, on June 28, McGurk struck a measured tone during testimony to the Senate Foreign Relations Committee. He said reports of abuses had been received in the early days of the operation, "many of which have turned out not to be credible but some of which appear to be credible."

McGurk declined a request for an interview. Mark Toner, the US state department’s deputy spokesperson, said American officials had expressed "concern both publicly and privately" about reported atrocities. "We find any abuse totally unacceptable," Toner said, and "any violation of human rights should be investigated with those responsible held accountable."

Iraq’s main Shia militias, trained and armed by Tehran, emerged during the 2003-2011 U.S. occupation and have grown in power and stature. After helping the government defend Baghdad when ISIL seized Mosul in 2014, the militias became arms of the Iraqi government.

In July, Human Rights Watch urged Iraqi military commanders to ban militias with abuse records from the fight to reclaim Mosul from ISIL.

Destroyed buildings from clashes are seen on the outskirts of Falluja, Iraq, June 20, 2016.