There are many issues in which standing midway (between the two extremes) is mere fantasy. For example, one cannot stand at the same distance from theism and atheism. There cannot be a person who is half atheist and half believer; or a person who is both honest and a liar at the same time, or pious and impious! These opposites can never meet, just like life and death.

There is no grey area in this regard; it is either black or white. If you choose the white, you are refusing the black and vice versa.

It is absurd to try combining the two extremes just like it is ridiculous to use division (mathematical process) to get the result of the multiplication process, or to do the deeds of the people of Hellfire and seek entering Paradise!

Seeking a mid-point between these two opposing paths is not less grave than choosing the wrong path; it may be even graver and worse. The hypocrites – for example – will be in the lowest depths of Hellfire.

Sometimes one does not have basic ideological contradictions, but is merely confused and unable to prioritize his principles. This leads to his failure when putting those principles into practice. Each and every one of us – for example – holds diverse allegiances; to his religion, country, tribe, and to himself, and so on.

If he does not prioritize those allegiances, he becomes more vulnerable to taking wrong decisions. If he prioritizes his allegiances, he will not experience any problems when he puts them into practice (and will not be the victim of dualism in principles). For example, a person's allegiance to religion must be given precedence over everything else and should be dominant over all other allegiances.

If one manages to prioritize his principles and overcome any dualism in them, he will take a major step towards attaining intellectual and psychological harmony. There is a vast difference between founding a harmonious intellectual system of thought and a mere pile of contradictory principles and policies. The first will be strong and the person can rely on it, and the other weak, and anything that would be founded on it will be mere sophisticated rubble.

The more harmonious the person’s principles are, the more he relishes psychological comfort, and the stronger his argument becomes.

On the contrary, the more a person embraces contradictory ideas and the more he has dualism in principles, the more forced he is into the abyss of superficiality and the less expressive his actions are of the moral values that he holds or wishes to hold. 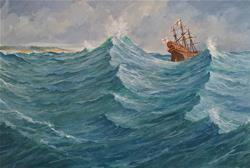 Like many Muslims today, I struggle with constancy in the remembrance of my Creator. I stay mostly mindful of being His servant, often finding myself subconsciously glorifying His name. But just as regularly...More