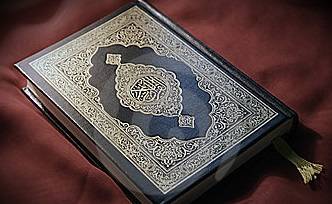 It was narrated on the authority of ‘Ali ibn Abi Talib

said: "He who recites and memorizes the Quran, making lawful what is lawful in it and making unlawful what is unlawful in it, Allah will admit him to Paradise and accept his intercession for ten of his household, to all of whom the Fire has been affirmed." [At-Tirmithi]

"The lawful is evident, and the unlawful is evident, and in between them there are suspicious matters unknown to a lot of people. So, whoever forsakes those suspicious matters (lest he may commit a sin) definitely keeps his religion and honor blameless; and whoever bravely indulges in these suspicious things is about to fall into the unlawful, like a shepherd who grazes (his animals) around the protected zone, and he is about to pasture them in it. Verily, every king has a protected zone, and the protected zone of Allah is His taboos.” [Al-Bukhari, Muslim, At-Tirmithi, Abu Dawood and An-Nasa’i]

Both the lawful and the unlawful are evidently clear in the Quran. Suspicious matters should be avoided according to the command of the hadith, for fear of falling into the unlawful. Whoever does so, Allah will admit him to Paradise and accept his intercession for his family.

Intercession is proven in the Quran and Sunnah; and whoever recites the Quran and acts upon what it contains will be made to intercede for others because of his high position and superiority in the sight of Allah Almighty. The first for whom he will be made to intercede are his parents, and their worthiness of intercession goes back to their being the direct cause of this act, even though they themselves are not among the people of the Quran. The intercession takes place only by the permission of Allah by whomever He pleases for whomever He likes. There will be no intercession for him who does not believe in Allah and His Messenger

. Just as one’s intercession for his parents is a fact, the parent’s intercession for his child is also proven in the Book of Allah. Allah mentioned one’s supplication for his parents (what means): {“Our Lord, forgive me and my parents and the believers the Day the account is established."} [Quran 14:41] Similarly, He Mentioned the parent’s supplication for his offspring (what means): {“My Lord, make me an establisher of prayer, and [many] from my descendants. Our Lord, and accept my supplication.”} [Quran 14:40] A mention may also be made of the supplication of Ibrahim (Abraham), may Allah exalt his mention, for his descendants (what means): {“Our Lord, and send among them a messenger from themselves who will recite to them Your verses and teach them the Book and wisdom and purify them. Indeed, You are The Exalted in Might, The Wise."} [Quran 2:129]

For this supplication in this world and the intercession in the Hereafter, they are in dire need. Intercession is assured for the Prophets and Messengers as well as for the Quran, fasting, righteous deeds, and Allah’s righteous servants and pious allies.

According to this hadith, one will intercede, not only for his parents, but also for his family members to whom the fire has been affirmed. That is the bounty of Allah which He gives to whomever He pleases and the reward of reciting and memorizing the Quran and acting upon its principles and laws in this world, and with Allah is the best reward.

Just as the righteous will intercede for their parents and relatives, they will also intercede, by the leave of Allah, for their teachers and disciples, those who have a good favor on them, those whom they like and those who like them in (the religion of) Allah Almighty.

that he said: "The Messenger of Allah

said: 'No doubt, this Quran is a rope, one of whose ends is in the Hand of Allah and the other in your hands: hold fast by it so that you would never go astray nor be ruined after it.'" [Ibn Abi Shaybah]

Allah Almighty says (what means): {And thus We have sent it down as an Arabic Quran and have diversified therein the warnings, that perhaps they will avoid [sin] or it would cause them remembrance.} [Quran 20:113]

Allah only revealed this Quran to guide the people; and it is Allah’s uncreated, revealed speech which He says and continues to say; and that is why one of its ends is in His Hand and the other end is the mus-haf, which is in our hands. We have to adhere to it: it is the strong rope between us and our Lord which no falsehood could approach, neither from before it, nor from behind. Allah kept it from any kind of distortion or alteration. In confirmation, He, the Almighty, says (what means): {Indeed, it is We Who sent down the Quran and indeed, We will be its guardian.} [Quran 15:9]

If things become difficult and the people fall into dispute and the ways are confused so much that no one will know what to do, the saved sect will be that which adheres to the Book of Allah (the Quran) and, after it, the Sunnah of the Messenger of Allah

as stated in a hadith that we will mention later, Allah willing.