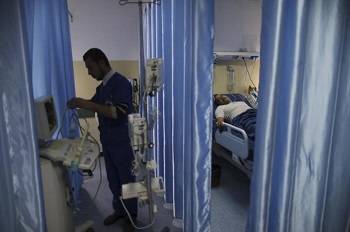 The walls of Izzeldin Abuelaish's office at the University of Toronto are covered in photographs, but one, in particular, stands out.

Three of his daughters, Bessan, Mayar and Aya, sit on a beach in the Gaza Strip. The tide is out, and the girls - aged 13, 15 and 20 - have written their names in big letters on the sand. Mayar is barefoot, Aya looks directly at the camera, and Bessan smiles widely as she gazes over her name.

For Abuelaish, the image is a reminder of the promise he made them.

"I am determined to bring my daughters justice," the 62-year-old Palestinian doctor told Al Jazeera, his voice both confident and hopeful. After years of fighting, his case will finally be heard before an Israeli court next month.

Only a few weeks after this photo was taken, Israel's brutal 2008-09 war on the Gaza Strip was nearing its end. On January 16, 2009, Israeli army tanks shelled the Abuelaish family home in the Jabaliya refugee camp, killing Bessan, Mayar, Aya and their 17-year-old cousin, Noor.

"From the early days, I said [that] if I could know that my daughters were the last sacrifice on the road to peace between Palestinians and Israelis, then I would accept it. They were not the last, and that makes me sad, even angry: What can I do more?"

Abuelaish's wife had recently passed away from leukaemia when Israel began the deadly, three-week assault on Gaza. By the end of the war, as many as 1,400 Palestinians were killed, the majority of whom were civilians.

Human rights groups documented the Israeli army's use of white phosphorous munitions on crowded, populated areas of Gaza during the war, along with targeting of civilian infrastructure. The United Nations accused Israel of committing widespread human rights abuses, including potential war crimes, and of using "disproportionate force" to harm Palestinian civilians.

In the case of Abuelaish's home, the Israeli army said at the time that soldiers were returning fire into areas from where they had been fired upon. The army later said that it thought it saw Hamas "spotters" near Abuelaish's house.

Abuelaish was not satisfied with this explanation, but his attempt to get the Israeli government to take responsibility and apologize for the deaths of his daughters and his niece was fruitless. Instead, Israeli authorities initially described his loved ones as "collateral damage", he said.

"It's unethical to speak about a human being as collateral damage ... We must delete this word from being connected with a human being," he said. "This was more painful to me because the wound was open and still bleeding, as if we were adding salt to the wound."

Almost two years after his daughters were killed, at the end of December 2010, Abuelaish took his fight for accountability to the Israeli courts, where he filed a civil lawsuit demanding an official apology. A year later, Abuelaish said he was forced to pay a 20,000-shekel bond ($5,300) for each of his daughters and his niece, in order for the case to be heard.

The hearings will finally take place this year in a court in Beer Sheva, in southern Israel, on March 15 and 19.

Abuelaish said that any compensation he is awarded would be used to establish schools in Palestine, Israel, Jordan, Afghanistan and Canada through the charity he has created in the memory of his children: the Daughters for Life Foundation.

Abuelaish and his surviving children moved to Canada in 2009, shortly after the tragedy. He now works as an associate professor in the Department of Public Health at the University of Toronto. In late 2015, all of his family members were granted Canadian citizenship.

"I appeal to every human being to join us in this mission to give hope and life from death," Abuelaish said. "This foundation is dedicated to give hope to the world and to prove also this tragedy [could lead to something] good."

He has called on Canadian Prime Minister Justin Trudeau to support his lawsuit and to send a letter to the Israeli government supporting his demand for an apology. A spokesperson for the ministry of foreign affairs told Al Jazeera that the government does not comment on civil lawsuits between private individuals and a foreign state.
But Abuelaish has not lost hope, nor given up on the prospect of finally getting justice for his loved ones.

"This will never take from my determination to move forward," he said. "This anger, [I want it] to be used as a fuel to do more - not to be defeated, not to be broken, not to give up or forget my beloved daughters, because I am accountable and will remain until the last breath in my life, accountable to them."

A technician prepares equipment as a patient lies on a bed in the operating room in a Hospital in the northern Gaza Strip January 4, 2016. REUTERS