None of you should belittle himself 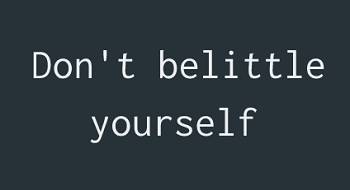 is reported to have said:

No one of you should be prevented by fear from people from speaking the truth if he sees or witnesses it. Indeed, it does not bring his death closer or keep sustenance away that he speaks out the truth or reminds the people of something of which its mention causes them great discomfort. [Ahmad]

said: "None of you should belittle himself." They asked: "O Messenger of Allah! How can anyone of us belittle himself?" He said: He who sees a matter concerning which it is due upon him to say something for the sake of Allah Almighty, but he does not speak; Allah Almighty will ask him on the Day of Judgment: “What prevented you from speaking the truth about such-and-such?” He would say: “Fear from people.” Then Allah will say: “Rather, it is I whom you should have feared more.” [Ibn Majah]

As the Messenger of Allah

addressed his Ummah (Islamic community) with these two hadiths, he aimed at educating and preparing it in accordance with the divine methodology, so as to fulfill the sought after mission that is assigned to it on earth and in history. He

also sought to commit them to a cohesive creedal structure. The problem in the Muslim Ummah is not 'knowing and searching for the truth', since Allah Almighty willed that this Ummah is never devoid of a group that knows the truth and demonstrates it to the people. The serious problem, however, is remaining silent in the face of falsehood and failing to declare the apparent truth openly, fearing harm or aspiring for some personal interest. These two things – fear and aspiration – are the two reasons for preventing the word of truth from reaching people's ears, and they remain an obstacle against people advising one another to hold onto the truth and be patient about it. However, fear remains the most significant factor in neglecting the duty of speaking out the truth and being satisfied with low aims and easy tasks. The person may fear the tyranny and the oppression of a tyrant, loss of sustenance, or hard living conditions.

When the devil seeks to avert a scholar from undertaking this sacred duty, he starts by casting dread into his heart by frightening him from the consequences of this, as he demonstrates to him what afflicted some of those who performed this duty and amplifies the torture and oppression that they were subjected to. He even goes farther than that and makes him fear death as a consequence of this, suggesting that the suffering of those who engage in Jihad (strive in the path of Allah) is inflicted upon them by their enemies, who thus have apparent influence upon their lives, making them longer or shorter. He also reminds him of the restrictions imposed on those who cannot exercise self-control, and as a result suffer hardship, distress, trouble, and rough living conditions, without a valid necessity. The devil also draws the scholar's attention to how those who call themselves callers to the truth are chased in every corner of the earth, rejected, disowned by their relatives, and forsaken by their friends. However, the Messenger of Allah

wanted all Muslims to always remember the self-evident truths of their faith and to be conscious of the tricks of the devil. Muslims should not be heedless of the fact that the terms of life are predestined by Allah Almighty, and that none can delay or bring forward his predetermined death or increase or decrease any other person's term of life. Muslims should also know that if Allah, the Exalted, wills some benefit or harm for a person, none can ever change His will. There are two maladies that affected the callers to Allah Almighty, causing them to neglect the duty of guiding people, conveying the message, enjoining what is good and forbidding what is evil. The two maladies are strong attachment to the Worldly life and keenness on its perishable pleasures.

Strong attachment to life, the desire to keep away from the specter of threat, and to stick to the safe side drive Islamic callers to remain silent about things that should not be overlooked or alter facts and adopt erroneous interpretations that adorn falsehood and conceal its ugliness. This is despite the fact that Allah, the Exalted, has taken the covenant from the scholars; that they should demonstrate the truth without paying heed to any blame they may receive in this respect. Also, He, the Almighty reminded them of the consequences for those who hid the truth and neglected it. In the Quran, He says (what means): {And [mention, O Muhammad] when Allah took a covenant from those who were given the Scripture, [saying]: "You must make it clear to the people and not conceal it." But they threw it away behind their backs and exchanged it for a small price. And wretched is that which they purchased.} [Quran 3:187] He also describes the believers as: {… humble toward the believers, powerful against the disbelievers; they strive in the cause of Allah and do not fear the blame of a critic.} [Quran 5:54]

Similarly, keenness on worldly perishable pleasures has a destructive impact on the Muslims' line of action. How often a scholar who is knowledgeable about what is lawful and what is unlawful is curbed – by his love for wealth – from speaking out the truth when this is needed from him! And how often people who are endowed with the blessing of knowledge and understanding turn a blind eye to many violations and abominable acts, out of fear from potential loss of their rations, salaries or certain material privileges which they enjoy! The devil may also seek to deceive them by persuading them that these privileges are their due rights and that they are more entitled to them than others. So, they ignore the other side of the issue, which is that these privileges are no more than a bribe in return for their silence and a reward for their adherence to politeness and good attitude toward the enemies of Allah, the Exalted, with whom harshness, not lenience, is commendable. It is regrettable that those who shoulder the responsibility of fighting Islam and commit themselves to silencing every voice that calls to Allah Almighty with insight, truthfulness, and devotion have perceived the vulnerable points in the callers to which they aim their arms. They exploit these weak points to tamper with the religion of Allah Almighty and its callers as they wish. They sometimes use the weapon of threat and intimidation, and at other times they employ the weapon of jobs, privileges, and bribes. Moreover, each body may specialize in one of these two weapons, as dictated by the conditions and circumstances.

Allah Almighty made wealth a source of temptation for people, and a test that distinguishes between sincere and insincere callers. It often happens that a person that suffers financial straits keeps on raising his voice with complaints about the bad conditions that engulf him and others and becomes known among the people for his efforts in the cause of Islam. However, when sustenance comes to him in abundance and poverty turns away from him, his voice fades out or even disappears and he becomes very lethargic, with no trace of the activeness he enjoyed before. His soul might have convinced him that his current condition of prosperity is the fruit of his struggle and patience. This is despite the fact that the conditions of the Muslims in most areas of the world are unsatisfactory, and that their problems are similar. Wherever we may go, we find dangers that threaten their fate and add to their weakness. We find such things as loyalty to the enemies of Allah Almighty, active and destructive evangelistic work in the Muslim countries, ruinous calls propagated here and there, dissipation of the fortunes of Muslims, and the subjecting of Islam in the sphere of propaganda to persons and whims.

These, as well as other things, are among the areas about which the scholars are required to express their opinions in a clear, unequivocal, and straight manner. There remains a last point to discuss, that is mentioned in the second hadith, in the statement that reads, "None of you should belittle himself."

wanted to instill self-confidence in the souls of Muslims. Self-confidence constitutes the motive for work and it cannot be attained, except when one is certain of the correctness of what he calls to and of the error of the opposing direction. Among the effects of self-confidence is that a person transforms from being a negative member of society, lost in the stream of heedlessness, into a positive, influential person who fears none but Allah, the Exalted, and despises falsehood. He despises it even more every time he is joined in this attitude by similar persons who take the Messenger of Allah

as an excellent example. May the peace and blessings of Allah be upon this unlettered Prophet whom Allah Almighty gave wisdom and sound judgment and who guided us, through the guidance of the Almighty Lord, to the best path and taught us the areas of goodness in the most clear and succinct manner. We implore Allah, the Exalted, to make us among those: {… who convey the messages of Allah and fear Him and do not fear anyone but Allah. And sufficient is Allah as accountant.} [Quran 33:39]