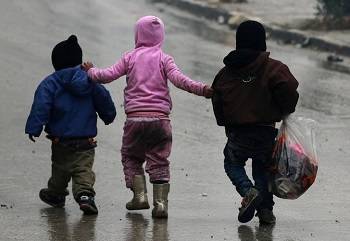 Child deaths increased 20 percent in civil war-torn Syria in 2016, making it the “worst year” since 2014, according to the United Nation’s children agency Monday.

“More than 850 children were recruited to fight in the conflict, more than double the number recruited in 2015,” the report said, adding that children were used as “executioners, suicide bombers or prison guards”.

“The depth of suffering is unprecedented. Millions of children in Syria come under attack on a daily basis, their lives turned upside down,” Geert Cappelaere, UNICEF Regional Director for the Middle East and North Africa, said.

“The most vulnerable among Syria’s children are the 2.8 million in hard-to-reach areas, including 280,000 children living under siege, almost completely cut off from humanitarian aid,” the statement underlined.

According to the statement, around 6 million children depend on humanitarian assistance, millions have been displaced and more than 2.3 million are living as refugees in Turkey, Lebanon, Jordan, Egypt and Iraq.

The statement also quoted a 12-year-old refugee in Turkey, identified as Darsy, as saying, “I want to be a surgeon to help the sick and injured people of Syria. I dream of a Syria without a war so we can go home. I dream of a world without any wars.”

Syria has been locked in a vicious civil war since early 2011, when the Bashar al-Assad regime cracked down on pro-democracy protests -- which erupted as part of the Arab Spring uprisings -- with unexpected ferocity.

Since then, more than a quarter-million people have been killed and more than 10 million displaced across the war-battered country, according to the UN.

Children walk together as they flee deeper into the remaining opposition-held areas of Aleppo, Syria December 13, 2016. REUTERS