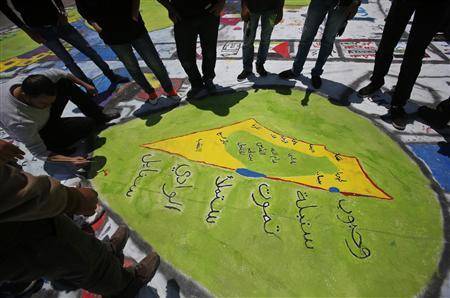 As Israel celebrates the Palestinian Nakba as its triumphant independence on May 1, it is preparing for a massive celebration for the 50th anniversary of its occupation of East Jerusalem, the West Bank and Gaza.

Two dates are often used to frame the so-called Palestinian-Israeli conflict: Nakba Day on May 15 and Naksa Day on June 5.

Nakba means "catastrophe", a reference that was commonly used to describe the violence meted out against the Palestinian Arab population during the period of British colonialism in Palestine, which extended from 1917 to 1948.

The term Nakba morphed to define the zenith of British and Zionist colonization and settlement in Palestine, which ultimately led to the ethnic cleansing of the Palestinian population from their historic homeland in 1947 and 1948.

Naksa, on the other hand, means the "letdown".

In that period, there were high hopes among ordinary Arabs that Arab armies would manage to defeat Israel, reclaim historic Palestine and pave the road for the Palestinian refugees - dispossessed during the Nakba - to go back to their homes.

By then, the number of refugees had grown rapidly, and refugee camps were bursting at the seams with misery and destitution.

During the Nakba, nearly 500 villages were destroyed, entire Palestinian towns depopulated and approximately 800,000 Palestinians exiled to make room for Jewish immigrants who arrived from all corners of the globe.

The Arabs were soundly defeated.

Lack of preparedness and hyped expectations on the Arab side, and massive American-Western military and financial support of Israel, led to a humiliating defeat for the Arabs on all fronts: the West Bank, Jordan's western border, the Gaza Strip, the Egyptian Sinai and the Syrian Golan Heights.
That defeat settled the military score decisively for Israel, cementing US-Israel relations like never before; and, equally important, led to a fundamental shift in language.

For a long time after the war, the Nakba was largely assigned to the history books and Israel's new borders - which acquired massive Arab lands, including the entirety of historic Palestine - became the new frame of reference.

The 1967 defeat brought an end to a previous dilemma in which the Palestinian armed struggle was often dictated by Arab countries, mainly Egypt, Jordan and Syria.

The occupation of the remaining 22 percent of the West Bank shifted the focus to East Jerusalem, the West Bank and Gaza, and allowed the Palestinian faction, Fatah, to redefine its role in light of Arab defeat and subsequent division.

The infamous declaration once made by former Israeli Prime Minister Golda Meir that Palestinians 'didn't exist' and that 'there is no such a thing as a Palestinian people' was far more dangerous than a mere racist comment.

That division was highlighted most starkly in the August 1967 Khartoum summit, where Arab leaders clashed over priorities and definitions. Should Israel's territorial gains redefine the status quo ante? Should Arabs focus on returning to a pre-1967 situation or that of pre-1948?

The Palestine Liberation Organization (PLO) insisted that the defeat in the war should not compromise the integrity of the struggle, and that Palestine - all of Palestine - was still the pressing issue. The message of Gamal Abdul Nasser, the Egyptian president, seemed, for once, befuddled, although he continued to advocate for a conventional military confrontation with Israel.

Syria, on the other hand, did not attend the summit.

Nonetheless, the Arabs agreed that there would be no negotiations, no recognition and no peace with Israel, whose behavior continued to be a source of loss, defeat and hostility throughout the region.

The response to the war was not promising internationally either.

The United Nations Security Council adopted Resolution 242 on November 22, 1967, reflecting the US Lyndon B Johnson administration's wishes to capitalize on the new status quo ante. The UN resolution demanded Israeli withdrawal "from occupied territories" in exchange for normalization with Israel.

The new language of the post-1967 period alarmed Palestinians, who realized that any future political settlement was likely to ignore the situation that existed prior to the war, and would only attempt to remedy current grievances.

Empowered by its military triumph, the 1967 victory was another chance for Israel to rewrite history. Israel's official language reflected that sense of newfound power.

In fact, Israel felt powerful enough that it shifted its discourse from presenting itself as a victimized country defending its border from Arab hordes to a country that had supremacy over ideas, history and common sense. Although it conquered all of Palestine and subjugated millions of its inhabitants, it still declared them non-existent.

Indeed, the infamous declaration once made by former Israeli Prime Minister Golda Meir that Palestinians "didn't exist" and that "there is no such a thing as a Palestinian people" was far more dangerous than a mere racist comment, as justifiably understood by many.

The statement was made two years after the Naksa.

The more land Israel illegally seized by military means and the more Palestinians were ethnically cleansed from their ancestral homeland, the more Israeli leaders felt the pressing need to erase Palestinians from the annals of history as a people with an identity, a culture and an entitlement to a nationhood.

If Palestinians "existed" in Israel's imagination, there could never be any moral justification for the creation of Israel; no spin could be powerful enough to rejoice at the birth of the Israeli "miracle" that "made the desert bloom".

Israel's violent birth callously required the destruction of a whole nation - one with a unique history, language, culture and collective memory. Therefore, the Palestinian people had to be wiped out to quell any possible sense of Israeli guilt, shame and legal and moral responsibility for what had befallen millions of a dispossessed people.

If a problem does not exist, then one is under no obligation to fix it. Thus, the denial of the Palestinian was the only intellectual formulation that would allow Israel to sustain and promote its national myths.

Not surprisingly, the Israeli logic was convincing enough for those - driven by political necessity, religious zeal or simply self-deluded - who felt the need to also celebrate the Israeli "miracle".

Their new mantra, as repeated by one of the United States' most opportunistic, and indeed, ignorant politicians, Newt Gingrich a few years ago, was: "Palestinians are an invented people."

This logic seeped through to every facet of Israeli society.

Despite a fledgling movement in Israel that attempts to challenge the Israeli narrative, in Israeli literature the Palestinian is a "mute shadow", as poignantly phrased by Elias Khoury.

The shadow is a reflection of something real, but intangible. It is mute so that it can be talked at, but can never talk back.

But defying common sense and rewriting history is an old Israeli habit. Israel's official discourse regarding what took place during the Nakba was not finalized until the 1950s and 60s.

In a Haaretz article entitled Catastrophic Thinking: Did Ben-Gurion Try to Rewrite History?, Shay Hazkani revealed the intriguing process of how Israel's first Prime Minister David Ben-Gurion worked closely with a group of Israeli Jewish scholars to develop a version of events to describe what had taken place in 1947-48.

Ben-Gurion wanted to propagate a version of history that was consistent with Israel's political position - yet he still lacked "evidence" to support that position. The manufactured "evidence" eventually became "history", and no other narrative was allowed to challenge Israel's take on the Nakba.

"Ben-Gurion probably never heard the word 'Nakba', but early on, at the end of the 1950s, Israel's first prime minister grasped the importance of the historical narrative," Hazkani wrote.

The Israeli leader assigned scholars in the civil service the task of fashioning an alternative history that continues to permeate Israeli thinking until this day.

Distracting from history - or the current reality of the horrific occupation of Palestine - has been in motion for nearly 70 years.

The absurdity of the Israeli celebration of the 50th anniversary of its occupation of East Jerusalem, the West Bank and Gaza, is not escaping all Israelis, of course.

"A state that celebrates 50 years of occupation is a state whose sense of direction has been lost, its ability to distinguish good from evil impaired," Israeli commentator Gideon Levy wrote in Haaretz. "What exactly is there to celebrate, Israelis? Fifty years of bloodshed, abuse, disinheritance and sadism? Only societies that have no conscience celebrate such anniversaries."

Levy argues that Israel has won the war of 1967 but has "lost nearly everything else".

Since then, Israel's arrogance, detestation of international law, "ongoing contempt for the world, the bragging and bullying" have all reached unprecedented heights.

Levy's article is entitled Our Nakba.

The courageous Levy is right, of course; but if the Israeli "Nakba" is to be judged strictly on moral grounds, then the shaming must start much earlier - at least 20 years before the war of 1967.

Writing in the Forward, Donna Nevel refuses to accept that the discussion of the conflict in Palestine starts in the war and occupation of 1967. Nevel is critical of the so-called "progressive Zionists" who insist on positioning the conversation only on the question of occupation, thus limiting any possibility of resolution to the "two-state solution".
Not only is such a "solution" defunct and practically not possible, but the very discussion precludes the Nakba altogether.

Israel's violent birth callously required the destruction of a whole nation - one with a unique history, language, culture and collective memory.

The "Nakba doesn't enter these conversations because it is the legacy and clearest manifestation of Zionism," Nevel wrote. "Those who ignore the Nakba - which Zionist and Israeli institutions have consistently done - are refusing to acknowledge Zionism as illegitimate from the beginning of its implementation."

This is precisely why Israeli police recently blocked the March of Return, conducted annually by Palestinians in Israel.

For years, Israel has been wary that a growing movement among Palestinians, Israelis and others around the world has been pushing for a paradigm shift in order to understand the roots of the conflict in Palestine.
That new thinking was a rational outcome of the end of the "peace process" and the demise of the "two-state solution".

Incapable of sustaining its founding myths, yet unable to offer an alternative, the Israeli government is now using coercive measures to respond to the budding movement: punishing those who insist on commemorating the Nakba, fining organizations that participate in such events and even perceiving as traitors any Jewish individuals and groups that deviate from its official thinking.

In these cases, coercion hardly works.

"The March [of Return] has rapidly grown in size over the past few years, in defiance of increasingly repressive measures from the Israeli authorities," wrote Jonathan Cook in Al Jazeera.

It seems that nearly 70 years after the founding of Israel, the past is still looming large.

Fortunately, the Palestinian voices that have fought against the official Israeli narrative are now joined by a growing number of Jewish voices.

It is through a new common narrative that a true understanding of the past can be attained, all with the hope that the peaceful vision for the future can replace the current one - one which can only be sustained through military domination, inequality and sheer propaganda.

A Palestinian draws a map showing the British Mandate of Palestine in the West Bank city of Ramallah, ahead of Nakba Day May 14, 2013. REUTERS