'They killed him because he was an Arab' 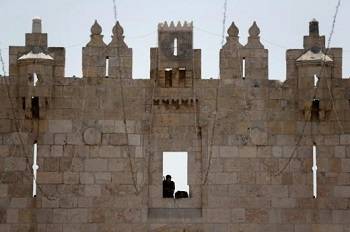 The family of a young Palestinian man fatally shot by Israeli police in Jaffa are demanding justice for what they believe was a "cold-blooded killing".

Mahdi al-Saadi, a 22-year-old Palestinian citizen of Israel, was shot in the chest and killed in the early hours of Saturday morning. Israeli police also shot another young man at the same scene, Sleiman Abu Taleb, who was taken to hospital in critical condition.

"I was travelling, and I got a phone call from my wife telling me that they killed our boy. The police did not get in touch with us or tell us what happened. He was killed for no reason - in cold blood. They killed him because he was an Arab," Jamal, Mahdi's father, told Al Jazeera.

Israeli police say the young men were suspects in a shooting at a store in Jaffa around 4am (01:00 GMT) on Saturday.

"A number of suspects opened fire and fired shots in Jaffa. They fled the area on a motorbike. The police unit chased the suspects. What we know after that is that the two suspects were taken to a hospital. One of them passed away from their wounds and the other one was wounded moderately. The case is being examined," Israeli police spokesperson Micky Rosenfeld told Al Jazeera.

The family does not believe the police narrative.

"The owner of the store that they're claiming my son fired shots at is my friend, and he's with me here at the funeral. Whether it happened or not, my son didn't do it," Jamal said.

Umm Musab, Mahdi's aunt, said, "this would have never happened if they were Jewish".

"The occupation narrates the story as it likes - whichever way it works for them. Even if they were involved in any crime, it should not have led to the killing and wounding of anyone," she told Al Jazeera. "We're not going to be quiet about this. We're going to stop the world to find out who killed him and make sure that he gets punished. Their job is not to kill our boys. Their job is to secure our safety, but they do the exact opposite."

There are some 1.8 million Palestinian citizens of Israel, the descendants of Palestinians who remained on their land when Israel was established in 1948 in a violent process of ethnic cleansing that led to the expulsion of some 750,000 Palestinians from historical Palestine.

They face discrimination in almost all fields of life in a state that defines itself as "Jewish", making inequality a reality. There are over 50 laws that discriminate against Palestinian citizens of the state.

"We are in utter shock. That night, Mahdi was calling his dad and telling him that he wanted to get married, that he was ready for marriage," said Umm Musab, noting that the heavy deployment of Israeli police in Palestinian neighborhoods constantly stirs tensions.

"They want our boys to fall into a trap and to arrest them and shoot at them. They stole our land; we don't want them to take our souls as well," she continued. "Enough is enough."

In response to the latest killing, Palestinian youth in Jaffa on Saturday took to the streets in anger and blocked the main road, spurring confrontations with Israeli police, who arrested an estimated eight Palestinian citizens of Israel.

AbdulQader Abu Shehadeh, an activist who was among those who were violently detained, said he went out to see what was going on before police arrested him "for no reason".

"I had to wait 10 hours for interrogation. They accused me of being at an unlawful protest. I was at the police station until about 2am yesterday," Abu Shehadeh told Al Jazeera. "There is an unbelievable amount of police and border police in Jaffa today, closing the main road, and they're still arresting people. People are very nervous."
Abu Shehadeh said that Palestinians in Israel have a "serious problem with the police, who treat Palestinians as enemies".

"The police, in general, regularly assault young men in a very savage way ... [they are] very politicised and the political parties do not have the power to protect us, even from the problems within our community," he said. "They treat us as enemies, and we don't know how to deal with this."

According to Adalah, Israel's Police Investigation Unit (Mahash), which operates under the Ministry of Justice, disregards the majority of complaints filed against Israeli police. In a 2014 report, Adalah found that between 2011 and 2013, the Mahash closed 93 percent of complaints without laying charges.

"Whether or not an illegal act had been committed prior to the Israeli police shooting and killing of Mahdi al-Saadi in Jaffa is immaterial to the issue at hand. The only question in this context is whether he posed any danger to the officers. According to reports, the police shot at the motorcycle in order to get it to stop and make an arrest. This constitutes a violation of the Israel police's own open-fire regulations, which were made public in 2016 as a result of freedom of information petition submitted by Adalah," Adalah lawyer Fady Khoury told Al Jazeera.

"The regulations state that in the case of a vehicular pursuit for the purpose of making an arrest, firearms should be used only as a last resort ... Shooting to kill has become the policy exercised by Israeli police officers in the field when they deal with Palestinian citizens," Khoury added.

At least 50 Palestinian citizens of Israel have been killed by police since 2000.

Mahdi's death comes after two weeks of increased violence and tensions between Israelis and Palestinians in the occupied territories of East Jerusalem and the West Bank.

On July 14, an attack by three Palestinian citizens of Israel near occupied East Jerusalem's al-Aqsa Mosque compound killed two Israeli guards, leading Israeli authorities to enforce more measures of control on the compound in the form of cameras and metal detectors.

The new measures enraged Palestinians, spurring two weeks of civil disobedience and protests until the cameras and metal detectors were removed.

During the events, Israeli forces shot dead at least six Palestinians and injured more than 1,300, according to the Palestinian Red Crescent.
Samy Abu Shehadeh, another activist in Jaffa who was present during the recent confrontations, believes that Mahdi's killing "came as an act of revenge" for the past two weeks.

"Why did they have to shoot him? Why didn't they just shoot at the motorcycle? Why don't we hear about Jewish citizens being killed by police? It's obvious - they do not have any problem with using violence and even killing because no one will get punished," he told Al Jazeera.

"There was so much violence in the way that they were arresting people in Jaffa. It was obvious that their retreat from everything they did in Jerusalem and al-Aqsa hurt the ego of the security apparatus. It seemed like they were coming to take revenge."