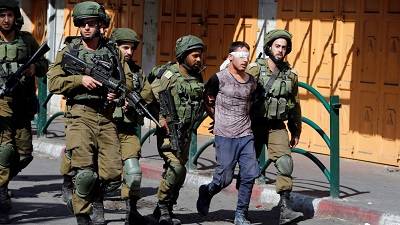 Just before noon on a warm October day, a shopkeeper in the Old City of Jerusalem was thinking about the young man who moments ago had asked him for a lighter, despite not carrying any cigarettes.

Suddenly, the shopkeeper heard screams and a large commotion. As he stepped outside his store he saw the same young man stabbing a Jewish settler with a knife, before taking the settler’s gun and shooting another settler.

The shopkeeper ducked back inside his store. Later he would tell local media that he had never seen anyone carrying out such an attack with such quiet calmness, almost with serenity.

The young man was Muhannad Halabi, a law student at the al-Quds University, who was just a few weeks short of his 20th birthday. Israeli forces shot him dead at the scene, but not before he had killed two Israelis and injured two others.

Halabi’s act was lauded by Palestinians as the spark of the October 2015 uprising. His stabbing and shooting of settlers had opened up the way for a surge of attacks carried out by individual Palestinians – politically unaffiliated, mostly under the age of 25 – against Israelis in the occupied West Bank, Jerusalem and modern day Israel.

Shafiq Halabi, Muhannad’s father, told Al Jazeera that the youth had followed their heart, and were not guided by anyone.

"They saw that there was no alternative to the oppression they lived under except for resistance," Halabi said.

Two years on, the attacks have abated, and are marked more by their sporadic nature, leaving at least 285 Palestinians and 42 Israelis killed.

According to the Palestinian Prisoners Centre for Studies, 14,000 Palestinians have arrested between October 2015 - September 2017, including 3,100 children and 437 women.

The latest attack was carried out by a Nimer Jamal, a Palestinian worker and father of four from the northwest Jerusalem town of Beit Surik, where he shot and killed four Israeli security officers in the settlement he worked in, Har Adar.

What was once hyped up as the third Palestinian Intifada had stuttered to intermittent attacks. According to Ramallah-based political analyst Hani al-Masri, it was only to be expected that the momentum which had initially carried the October uprising would not expand into a fully-fledged intifada.

"This was an intifada of waves, or a spark of waves, a reaction,” Masri told Al Jazeera. “It was the result of the absence of a plan of action by the Palestinian leadership- in that they did not present an effective strategy to confront the occupation."

Instead, the "wave" of actions carried out by Palestinians, while indicative of the current situation of the population in general, do not express an organized effort that can be accumulated into a sustainable movement.

In order for an intifada to be inclusive, Masri continued, it must have a unified leadership, an agenda, and a goal. The political division between Fatah and Hamas has drained the energy of the Palestinian people, he added.

"If the recent reconciliation efforts succeed, this will pave the ground for a broad resistance model," he said.

"Yet the leadership we are saddled with does not believe in an intifada or a comprehensive resistance as a technique," he said, referring to the Palestinian Authority.

"This is what it fears because it sees it as a threat against its own limited rule and were it to happen, cannot control it. This is why the attacks occur in waves."

Muhannad Halabi’s funeral was the largest the West Bank had witnessed since the end of the second Intifada in 2005. Tens of thousands participated in the procession, where he was laid to rest wrapped in a lawyer's robe.

At the time, Palestinian media had peddled the line that Muhannad had carried out his attack to avenge the murder of his friend and fellow university student Dia Talahmeh.

Talahmeh, 21, had set up an ambush for an Israeli army patrol in the Palestinian village of Kharsa. Witnesses said that he had thrown an IED at the patrol, which exploded prematurely. The soldiers shot Talahmen once in the head, and five times in his body.

But Shafiq Halabi said his son was more affected by the images of Palestinian women being physically assaulted by Israeli security forces in the al-Aqsa Mosque compound, and the massacres of Palestinians during Israel’s 2014 war on the Gaza Strip.

"Muhannad wasn't influenced by Dia’s martyrdom," he said. "They knew each other in university but were not close, as far as I know. Muhannad was influenced more by the unbearable status quo and how there was nothing done to better it," adding that his attack on the settlers was done to retain "dignity for Palestinians".

Akram Rjoub, the governor of Nablus, told Al Jazeera that Palestinians are not inclined to violence.

"But when Israel crosses every moral line possible, no one can predict what the response of the Palestinians will be, much less the reactions of the youth who find themselves surrounded on all sides by oppression that seeks to destroy their dignity," he said.

The events of the past two years, Rjoub said, had everything to do with the violent policies of the Israeli occupation that Palestinians encounter in their everyday lives.

"The violation of the al-Aqsa Mosque compound, the continued expropriation of lands, the Israeli government’s rhetoric and support for settlements, the price tag acts on places of worship, the burning alive of Palestinians such as the Dawabsheh family and Mohammad Abukhdeir – all of this is what drove some of the Palestinian youth to carry out attacks against Israelis," he said.

The Israeli army has been using collective punishment as a deterrence to stop the attacks by Palestinians. Punitive measures such as the demolishment of family homes of the Palestinian who carried out an attack is but one example.

PA President Mahmoud Abbas has been quick to distance himself from the attacks, contributing to the growing sense of disillusionment of Palestinians with his government.

"I'd be crazy if I told my son that stabbing someone was a good act," he once said, after he sent security forces to search through the schoolbags of Palestinian children for knives.

Shafiq Halabi, whose eldest son Mohammad was arrested by Israel in the wake of Muhannad’s attack and whose home was demolished three months after, said that he views the actions of the youth as proof that they still have an awareness and a sense of belonging to their homeland, in spite of their reality.

It is not a coincidence that the older generation, those who witnessed the first Intifada and were active in the 70s and 80s, are not part of the wave, he said.

"The state of these youths is humiliating," he said. "They have witnessed 24 years of the PA doing nothing to improve their lives, which is constantly getting from bad to worse.

"As long as the Israeli violence and crimes continue then these attacks will also carry on," he said.