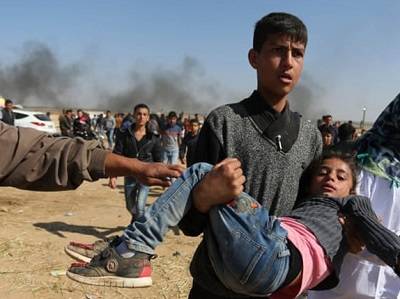 Israel is holding the bodies of two Palestinians killed by its snipers near the border with the besieged Gaza Strip, an Israeli official confirmed on Sunday.

Yoav Mordechai said Israel will not return the bodies of the two Palestinians until the remains of two Israeli soldiers killed during Israel's war on Gaza are returned.

"Gaza will not know peace until the Israelis are returned from the Gaza Strip and our soldiers will be brought for burial in Israel," he said in a Facebook post in Arabic.

Israel is already holding the bodies of 24 Palestinians since 2014, when the Israeli army launched a deadly offensive on the blockaded territory.

Hamas, which governs the Gaza Strip, is believed to be holding four Israelis since 2014, but has not said whether they were dead or alive.

With the two bodies, the death toll of Palestinians killed by Israeli snipers on Friday has risen to 17.

Israeli snipers opened fire as thousands marched near Gaza's border with Israel in a major demonstration marking the 42nd anniversary of Land Day.

More than 1,400 others were wounded after Israeli forces fired live ammunition at protesters and used tear gas to push them back from a heavily fortified fence, according to the Palestinian Ministry of Health.

On Saturday, the Israeli army threatened a "stronger response" to Palestinian protests along the border with the Gaza Strip.

Friday's rallies were the start of a six-week protest that culminates on May 15, the day the Palestinians call as "Nakba", or "Catastrophe", when Israel was created.

The demonstrators are demanding that Palestinian refugees be allowed the right of return to towns and villages which their families fled from, or were driven out of by the Jewish settlers from around the world, when the state of Israel was created in 1948.

The "Great March of Return" in Gaza- MARCH 31: A girl, affected by tear gas fired by the Israeli forces, is being carried away by a boy Khan Yunis, March 31, 2018.[Anadolu]