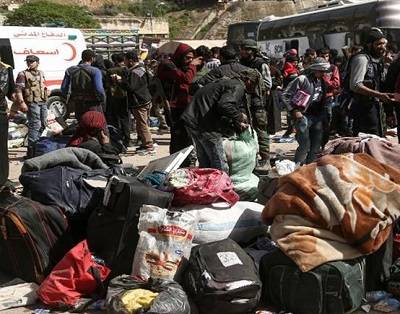 Families who have left Damascus neighborhood for Idlib tell of taking their most precious possessions with them.

Abu Jawad was among thousands of Syrians who left their homes and underground shelters in the shrinking opposition enclave of Eastern Ghouta to one of the last remaining opposition-held areas in northwest Syria.

With dozens of daily convoys of buses making the 320km journey to the Idlib province since late March, families have been forced to take only the most essential items.

"We left with nothing; we just took our feelings of despair and heartbreak with us," the 27-year-old from Hammoudia told Al Jazeera as he explained the pain of leaving the town he had grown up in his whole life.

Abu Jawad fled Eastern Ghouta with his wife and 18-month-old daughter on March 28, less than a week after Faylaq ar-Rahman, the second-largest opposition force in the opposition enclave, reached a deal with the Syrian regime to evacuate fighters and civilians to Idlib.

"Everything that means something to us, our homes, our lands ... we left that all behind," he said.

The regime began its major offensive to take Eastern Ghouta on February 18, and split the opposition-held territory up on March 11.

The fighting has left more than 1,600 dead, and caused immense damage to area's infrastructure, which has been pounded by the Syrian air force.

Last week, two opposition groups reached an evacuation deal with the Russian army, which resulted in at least 19,000 people leaving for the northern province of Idlib.

Syrian families leaving to regime-held areas have been banned from taking any belongings at all, sources on the ground told Al Jazeera.

On the other hand, those moving to opposition-held areas in northern Syria have reportedly been allowed a single small suitcase.

Several families told Al Jazeera they believe taking the keys of their homes along with them will keep the memory of their lives in Eastern Ghouta alive.

"I took the keys to the house we used to live in. That's the most important thing to me," Moayyad, 29, who left Zamalka last week with his wife, three brothers and their families, told Al Jazeera.

Moayyad's neighbour, Abu Yahya, who also left Zamalka to Idlib, took the keys to his home, car, motorbike and even the kindergarten he used to run.

"I took all these keys hoping that one day I'll return. Even if my home is demolished, this key will remain a testament to how we held on to Ghouta until the last minute."

Like most civilians in Eastern Ghouta, Moayyad and Abu Yahya had been unable to live in their homes while they hid in underground shelters with their families for weeks, as the Syrian regime and Russian forces bombarded the enclave from the air.

For photojournalist Moneim Eissa, 24, picture archives are the most important of his belongings.

"My hard disks carry an archive of all the important memories; photos of Ghouta and of family and friends who were either killed or went missing," Eissa, who left Hammouria, told Al Jazeera.

"Everything I'd built in Ghouta, my home and life, is gone. I have to start all over again, but at least this archive will keep the memory of things that mattered the most."

In addition to his hard discs, Eissa took his camera and laptop, which he says are essential tools for any journalist.

"Without them, I wouldn't be able to record events or report them to the world."

Similarly, Abu Yahya told Al Jazeera that the only thing his elderly mother choose to take along with her was a large family photo album.

Several families told Al Jazeera they kept their mobile phones for two reasons: to keep a record of their photos and to maintain communication with their loved ones.

"I took my phone because it has hundreds of precious photos of Ghouta, and of my family and friends," Moayyad said.

"It also keeps me connected to the people I know, who are now scattered around the world because of the war."

Although Eissa has no plans of leaving Syria, he took his passport and personal papers with him.

"In some ways, there's no point in carrying an identity card because it seems like we are trapped here regardless of where we flee," he said.

"But I've kept my papers just in case they are needed to identify my body at some point."

But for Abu Yahya, who took his high school certificates, his passport and other identity cards, these papers may come in handy if he were to leave Syria one day.

"I might need my certificates and passport if I were to move to another country," he said.

"My father even took the deed to his home which he's owned and lived in for most of his life."

Abu Yahya also took a watch, which he says his mother gifted him when he was young.

"I couldn't leave that watch behind. It holds too much sentimental value," he said.

Families with young children have prioritized taking supplies including nappies, food items, clothes and a few toys during their journey out of Ghouta.

For Alaa, a mother of three disabled children, three toys were essential for keeping her children's moods stable during the journey to Idlib.

"I also took some clothes, nappies, some water and a few food items for the road," she added.

Abu Jawad, on the other hand, told Al Jazeera he was unable to take any of his daughter's toys.

"It was impossible to fit anything but the bare essentials," he said.

For some Eastern Ghouta residents, however, nothing they could take would compensate for leaving their homes behind.

"We've left our lands forever and there is no meaning in taking anything along," said 40-year-old Abdo Abu Badr, whose home, car and farm were all burned to ashes after an air raid targeted them.

"Nothing will compensate for the loss that we felt as we said farewell to Ghouta."